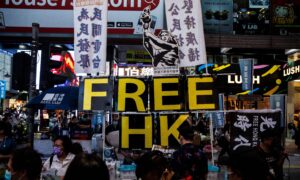 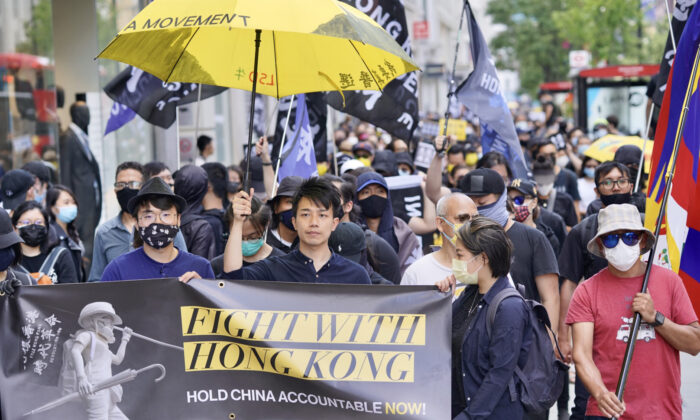 More than 3,000 people joined a rally in London on Saturday to support the people of Hong Kong in the pursuit of freedom while the Group of Seven (G-7) leaders meet in Cornwall.

Rallies were also held in about 52 cities across 23 countries on the same day to commemorate the two-year anniversary of Hong Kong’s pro-democracy movement.

MPs, Hong Kong pro-democracy activists, and representatives of other human rights groups were among those attending the London rally.

Former Conservative Party leader Sir Iain Duncan Smith said that the Chinese Communist Party (CCP) “poses the single biggest threat to the concept of freedom around the world at the moment.”

But it’s afraid of “free people” such as pro-democracy Hongkongers because they “can change China,” and that’s what they will do, he said.

Speaking to the crowd on Saturday, Duncan Smith said he was “humbled” to be at the rally.

Duncan Smith also said that the fight between the CCP and the democratic world is “an ideological fight that is going to get worse,” and that there’s “no way of hiding any longer” for the Western governments.

“I think all the G-7 need to understand the real challenge that we face, which is an intolerant, dictatorial, communist regime,” Duncan Smith told reporters ahead of the rally.

Speaking to NTD afterward, Duncan Smith said: “What we represent on the other side of that is freedom through democracy, human rights, and the rule of law.

“It’s very simple. This is an ideological fight that is going to get worse. But the Western governments need to face up to this. There’s no way of hiding any longer. China’s ambition is to turn the world into China. And our job is to stop that.”

Duncan Smith said that World War II taught us that “if you fear to speak out, then the other side win; if you fear to defend freedom, then freedom is lost,” so what G-7 countries do after the summit “matters.”

Labour Party Shadow Minister for Asia and the Pacific Stephen Kinnock also paid tribute to Hongkongers at the rally and in Hong Kong.

“What’s happened over these last years has been a full-frontal assault on democracy, human rights, and the rule of law,” Kinnock said.

“We have seen the Chinese government completely violating the basis of the Sino–British declaration of the [Hong Kong] Basic Law. Those are legally binding obligations that they themselves have signed up to.”

Kinnock told NTD that the Chinese regime’s behaviour revealed that it’s “interested only in complete monopoly of power.”

“And they will even break international law in order to achieve that monopoly of power,” he said.

“The idea was that we were going to open up our markets to China, and that in return we were going to get China aligning with international norms and standards. The opposite has happened. The golden era strategy has been a complete disaster,” he said.

Kinnock also blasted the UK government for having not sanctioned Hong Kong’s Chief Executive Carrie Lam and other senior executives, and British judges who are still serving on the Hong Kong Court of Appeal.

Crossparty lawmakers from both houses of Parliament have urged the UK government to impose sanctions on Lam and others responsible for human rights abuses in China, including Chinese leader Xi Jinping.

On June 12, 2019, tens of thousands of Hong Kong residents protested outside the Legislative Council (LegCo) against the second reading of an extradition bill, which would allow the city’s top official, the chief executive, to sign off on extradition requests, including from mainland China, without approval from the LegCo.

The reading was canceled as a result of the protest, and the bill has since been withdrawn. However, police fired tear gas and projectiles to disperse the demonstrators, injuring over 80 people, including one who was reportedly shot in the eye.