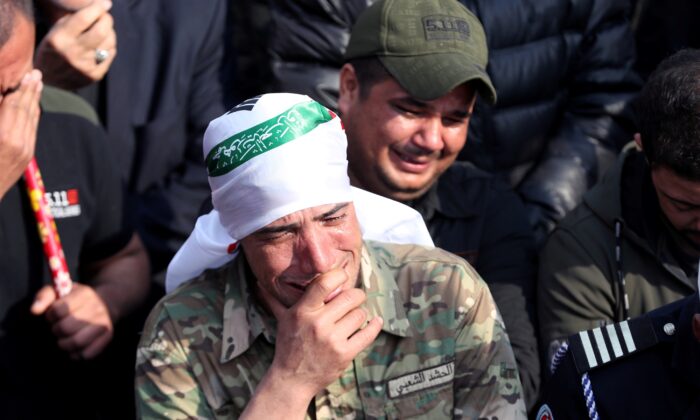 A mourner reacts as he attends the funeral of the Iranian Major-General Qassem Soleimani, top commander of the elite Quds Force of the Revolutionary Guards, and the Iraqi militia commander Abu Mahdi al-Muhandis, who were killed in an air strike at Baghdad airport, in Baghdad, Iraq, on Jan. 4, 2020. (Thaier al-Sudani/Reuters)
Middle East

Tens of thousands of people marched in Baghdad, Iraq, on Jan. 4 to mourn slain Iranian General Qassem Soleimani and others killed in a U.S. airstrike, including Iraqi militia leader Abu Mahdi al-Muhandis.

Al-Muhandis was the deputy commander of the Popular Mobilization Forces (PMF), a grouping of Iran-backed militias.

A PMF-organized procession carrying the bodies of Soleimani, al-Muhandis, and other Iraqis killed in the U.S. strike took place in Baghdad’s Green Zone.

Mourners included many militiamen in uniform for whom al-Muhandis and Soleimani were heroes. They carried portraits of both men and plastered them on walls and armored personnel carriers in the procession. Chants of “Death to America” and “No No Israel” rang out.

Some Iraqis condemned the attack on Soleimani.

“It is necessary to take revenge on the murderers. The martyrs got the prize they wanted—the prize of martyrdom,” said one of the marchers, Ali al-Khatib.

A slew of marchers held pictures of the slain men while others hoisted posters with anti-U.S. slogans.

Many Iraqis also voiced fear of militia reprisals against those involved in months of street protests against the Iranian-backed Baghdad government over alleged misrule and corruption.

They said Soleimani and al-Muhandis had backed the use of force against unarmed anti-government protesters last year and established militias that demonstrators blame for many of Iraq’s social and economic woes.

In Iran, some people worried that Soleimani’s death might push the country into a ruinous war with a superpower.

“I feel so sad for Soleimani’s death but what if America and Iran start a war? I have children. What if they send my son to war?” said Monireh, a retired teacher.

Iranian leaders have described Soleimani as a martyr and vowed to take revenge.

“He was martyred by the most villainous people, the U.S. govt, & their pride in this crime is a distinguishing feature of him,” Supreme Leader Sayyid Khamenei said in a Twitter post.

In a message to Soleimani’s family on Saturday, Khamenei said, “You saw people in many cities come out in numbers, with devotion. Wait to see his funeral. These blessings are before us to see the value of martyrdom. What a blessing for Hajj Qasem. He achieved his dream.”

To Martyr Soleimani’s family, “You saw people in many cities come out in numbers, with devotion. Wait to see his funeral. These blessings are before us to see the value of martyrdom. What a blessing for Hajj Qasem. He achieved his dream.”

Khamenei visited Soleimani’s home and prayed with his family. He also ordered a three day mourning period across the nation.

U.S. military leaders said they took out Soleimani because he was planning an “imminent attack” on American interests in the Middle East.

Soleimani was “actively developing plans to attack American diplomats and service members in Iraq and throughout the region,” the Department of Defense said in a statement.

“The American people should know that President Trump’s decision to remove Qassem Soleimani from the battlefield saved American lives,” Secretary of State Mike Pompeo said during a television appearance.