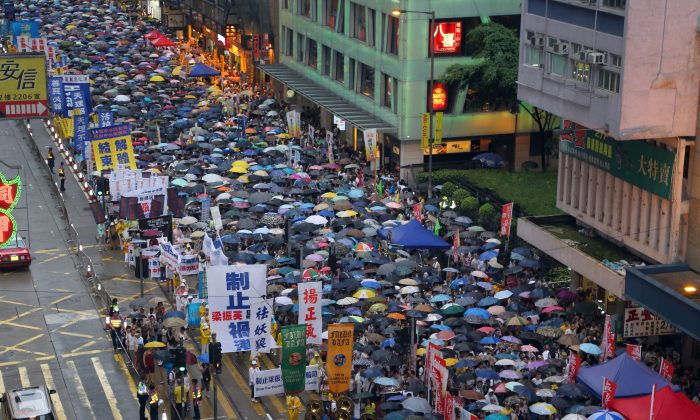 Thousands March For Democracy and Autonomy In Hong Kong

Tens of thousands of Hong Kong residents took to the streets of Hong Kong on Monday to demand greater democracy, as the public grew more concerned over Beijing’s encroachment on the city’s long-held independence.

The march organizer and rights group, Civil Human Rights Front estimated that 430,000 people joined the protests on Monday, despite heavy rain from an approaching typhoon. Hong Kong police forces, however, reported a much smaller 66,000 figure.

The city, a former British colony, was handed back to Chinese sovereignty on July 1, 1997. Every year since, a march is held on the anniversary to call for democracy and universal suffrage. In Hong Kong, the political leader, called the chief executive, is elected by a committee of electors that make up less than 0.02 percent of the city’s total population. A proportion of the lawmakers in the Legislative Council are also elected through closed elections among business sectors.

Although mainland Chinese authorities have promised universal suffrage for the 2017 chief executive elections, Hong Kong residents are worried that the Beijing leadership will have considerable influence over the running candidates, particularly after Qiao Xiaoyang, a top mainland official, remarked that candidates cannot be those who “confront the central government,” the South China Morning Post reported.

A participant at the march, who only wished to be identified by his surname Leung, is skeptical that truly free elections can take place. “The Chinese Communist Party (CCP) will not tolerate universal suffrage for Hong Kong people. The CCP will not share its power with the people … The only way left is to overthrow the government, overthrow the CCP.”

The past few weeks leading up to the march, Hong Kong citizens’ concern for the loss of their basic civil liberties reached a new height, when several Hong Kong media organizations whose reports frequently criticized the mainland Chinese regime were attacked. Many suspected that the attacks were launched by the Chinese regime to silence criticism, creating a “chilling effect” on the freedom of expression in Hong Kong.

On Sunday, 26,000 Apple Daily newspapers were set on fire at a distribution point in the Central District, according to its publisher Next Media. Apple Daily is a popular newspaper known for being critical of the Beijing leadership and supportive of the democratic cause in Hong Kong.

Democracy activist and legislator Leung Kwok-hung told BBC Chinese that he received an anonymous phone call on Saturday, when a man threatened that Leung will have to “pay the consequences” if he were to attend the march on Monday. Leung still showed up at the march.

Such incidents have intensified the gap between Hong Kong and the mainland. In a report recently published by the University of Hong Kong, 36 percent of Hong Kong residents identified themselves as Chinese nationals, the lowest percentage since 1999.

The march set out from Victoria Park at around 2:40 pm local time. Protestors shouted slogans like “fight for democracy, without fear of wind or rain” and held posters and banners calling for the current chief executive, Leung Chun-ying, to step down from office. Leung was involved in several scandals since before he took office last year, including a rumor that he is an underground Chinese Communist Party member.

March participant Mr. Wong said Leung Chun-ying has had a terrible record. “In terms of people’s livelihood, his housing policy is poor, and there was a lot of inflation. With regard to democracy, universal suffrage has not been instituted, especially with the interventions by the CCP. Thus, Hong Kong does not enjoy true democracy. I think his leaving office would be good for improving people’s livelihood.”

March organizer Jackie Hung Ling-yu said the suppression of freedoms will only grow more serious if Leung is not ousted. “The government will think that using these methods to eliminate people’s voices is effective, so Leung Chun-ying must step down.”

Pro-democracy organizations and other groups also attended the march to champion their causes, such as anti-corruption and freedom of expression.

As Hong Kong is the only place in the Chinese state where people can freely gather, many mainland Chinese citizens also traveled to Hong Kong to express their grievances. Having appealed to mainland Chinese authorities for years without any response, Ran Chongbi, a resident of Dongguan City, Guangdong Province, came to Hong Kong to seek redress for her daughter, who was raped in 2008 when she was five years-old. The perpetrator was given a light sentence of six years in prison and a few thousand yuan fine, citing that he confessed his crime and lacked the financial ability to pay the penalty, according to Ran. She hopes that by attending the July 1 march, she can make her daughter’s case known to the world.

The Chinese criminal law code dictates that raping a minor is punishable to at least ten years imprisonment. Ran has been petitioning since 2008 to make a complaint against the court that tried her daughter’s case, but was repeatedly driven away by the police and beaten by hired hands of the Guangdong public security bureau. “There are so many wronged people in China, in the hundreds of thousands, and there are no human rights or democracy to speak of. I hope the people of Hong Kong will pay attention to my daughter’s case, help in her healing, and help me in obtaining justice and human rights.”

Other mainland citizens who tried to come to Hong Kong for the march were stopped by local authorities. Though Jin Wenmei, a petitioner from Zhanjiang City, Guangdong Province, has Hong Kong residency, she was detained by local authorities after returning to Guangdong from attending the June 4 candlelight vigil in Hong Kong commemorating victims of the 1989 democracy protests. She was prevented from traveling to Hong Kong for the march.

With reporting by Leung Lou-si and Lee Zan. Translation by Ming Ming and Olivia Li.

Annie Wu
Follow
Annie Wu joined the full-time staff at the Epoch Times in July 2014. That year, she won a first-place award from the New York Press Association for best spot news coverage. She is a graduate of Barnard College and the Columbia University Graduate School of Journalism.
annieeenyc
More articles from this author
Meaning in Every Movement: Conveying Emotions and Timeless Virtues Through Dance
sharecomments
Classical Chinese Dance: A Process of Self-Improvement to Achieve Inner Beauty
sharecomments
Depicting China’s Real-Life Tragedies Through Dance
sharecomments