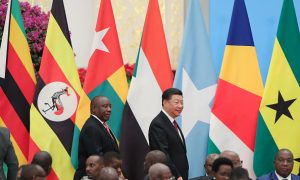 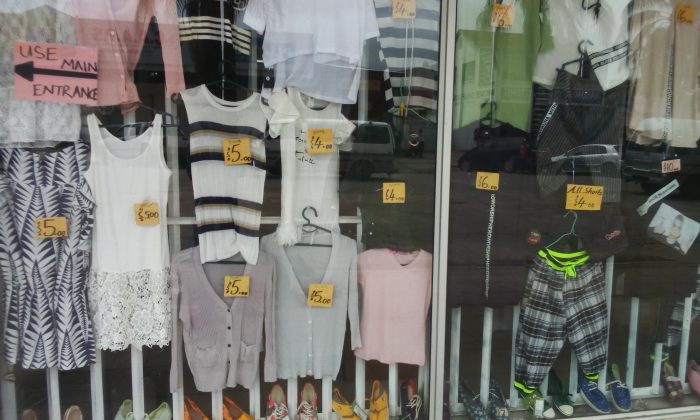 A shop displays some of the cheap products from China in Mutare, zimbabwe. (Andrew Mambondiyani/Special to The Epoch Times)
Africa

MUTARE, Zimbabwe—Thousands of people in Zimbabwe have lost their jobs in the past few years because a flood of cheap imports from China has essentially destroyed the country’s manufacturing industry, experts say.

Businessman and former Harare Mayor Bernard Manyenyeni told The Epoch Times that some businesses in Zimbabwe have collapsed as a result of stiff competition from cheap Chinese products.

“Local industry has suffered,” he said. “The Chinese costs of production are painfully low for Zimbabwean industries to match.”

The low cost of labor and mechanization make China a formidable producer even after adding shipping and customs duties, Manyenyeni said. He said the influx of cheap products has negatively affected Zimbabwe’s clothing, manufacturing, electrical, plastic ware, and equipment sectors.

He noted, however, that the quality of some of the Chinese products is very low, to the point that such products have earned the derogatory moniker “zhing zhongs,” a name Zimbabweans use when they have disdain for something.

“Retailers sometimes offer two-tier pricing and a disclaimer on the quality of the Chinese products,” he said.

In Manyenyeni’s opinion, industry in Zimbabwe needs to have globally competitive costs, especially in the area of labor.

“We may need a sector-by-sector impact analysis to determine which particular sectors require special treatment, for how long, and for what tangible benefit. It could be value-driven, prioritizing the high-value, high-impact options,” he said.

The effects of cheap Chinese goods on the Zimbabwean market has been huge, Linda Masarira, national spokesperson for the opposition party Movement for Democratic Change, said.

“It has totally collapsed the local clothing industry and created massive unemployment,” Masarira said. “It has contributed heavily to the currency crisis we are having. The Chinese are mopping up the U.S. dollars from Zimbabwe.”

She said the government has the obligation to protect local industry from cheap Chinese goods, but hasn’t acted.

“It’s rather unfortunate that we have a greedy government that only cares about its pockets and not the people’s livelihoods and welfare,” she said.

In the leadup to the country’s general elections last July, Democratic Opposition Party (DOP) leader Harry Peter Wilson promised that if he was elected, he would phase out the importation of cheap Chinese goods to boost the capacity of local industry and create jobs.

Wilson didn’t get elected, but in an interview with The Epoch Times, he criticized the approach of the current government under President Emmerson Mnangagwa.

“I don’t think [the government] understands the word industrialization, and that once you have a stronger industry, you create more employment. This is our biggest sector for employment and it is not worth bringing in Chinese products to Zimbabwe, where you have skilled workers and a strong working class,” he said.

However, Wilson noted that the government may not be able to do much because the country has received loans and donations from Beijing for projects like a new parliament.

In addition, Mnangagwa’s government is expecting more than a US$2 billion economic bailout from China under the One Belt, One Road initiative. Zimbabwe has also received various loans from China for energy and agriculture development, airport expansion, and other key infrastructure development.

Masarira has grave concerns about that approach and questions whether it is of benefit to Zimbabweans.

“As it stands, we do not even know what our government is trading these so-called economic bailouts for. One day, we will wake up and find out that the whole country was mortgaged to the Chinese,” she warned.

Manyenyeni believes Zimbabwe can reduce Chinese imports if it goes about it the right way.

“It can be done,” he said. “Not every decision that has a local impact is big enough to attract the attention or wrath of giant China.”