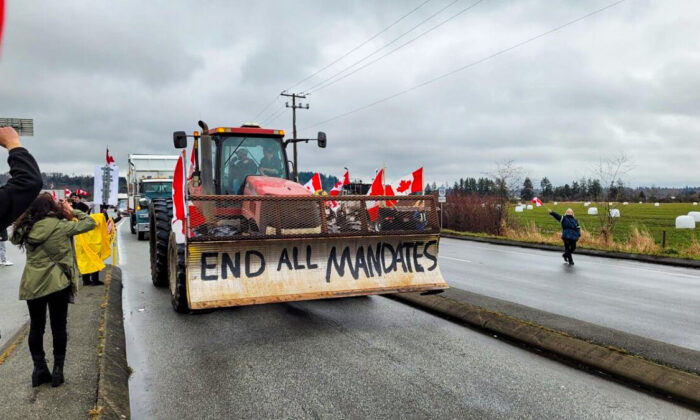 As police quash the protest against COVID-19 mandates in Ottawa, thousands held demonstrations in other parts of Canada on Saturday, Feb. 19, to call for an end to the pandemic restrictions.

In British Columbia, protesters opposed to the federal COVID-19 mandates forced another shutdown of the Pacific Highway border crossing on Feb. 19, after the RCMP closed off to all traffic the area around the intersection of 8th Avenue and 176 Street in Surrey. This development followed the arrest of 16 people on Feb. 13 and 14 as police took action to clear the previous demonstration at the border crossing to Washington State.

“It’s been a very busy day for our teams on the ground, and those supporting operations from behind the scenes,” said Sgt. Elenore Sturko, a media relations officer for the Surrey RCMP, in a statement.

“Our work here is not done though, and the public can expect a continued police presence in the days and nights ahead.”

On Feb. 20, the Surrey RCMP said in a Twitter post that protesters have departed and roads have reopened near the Pacific Highway border crossing. “Traffic is now moving on 176 Street in all directions and the public can access the border crossing. Vehicle road checks will remain in place,” the police said.

In Calgary, thousands of people joined a United for Freedom rally on Feb. 19, marching through the streets of the city from Central Memorial Park down what the organizers referred to as the “Freedom Mile 17th Avenue.”

“This is a peaceful, legal protest, in solidarity with Canadians across the country calling for an immediate end to all government [COVID-19] mandates and the return to freedom in our nation now,” according to the Facebook community page Calgary Freedom Central.

In Quebec, thousands of protesters also took to the streets on the same day seeking an end to all COVID-19 public health measures.

It was the second large demonstration against public health measures in the province in two weeks. Many called for an end to the provincially declared health emergency and mandatory masks for school-aged children.

Bernard Gauthier, one of the protest organizers, said that the protest was “peaceful” and that he hoped the provincial government would return the favour without specifying any demands.

Some protesters said they would also like assurance that the vaccine passport system would not return.

Following the previous protest in early February, the Quebec government announced the gradual phase-out of its COVID-19 vaccine mandate by March 14. Health Minister Christian Dube, however, said the vaccine passport system would be brought back if needed during a new wave of COVID-19.

On Feb. 19, Quebec City police said they had made three arrests near the provincial legislature.

“The majority of the demonstrators are respecting and honouring their agreement to want to demonstrate peacefully,” the police said in a social media post in French.

In Toronto, police set up extensive road closures around the city’s downtown area as protesters gathered in a rally for the third week to oppose the public health measures.

In a Feb. 19 social media post, the Toronto police said the decision to close further roads came after several trucks came into the city “to cause disruption” on the night of Feb. 18, and they wanted to stop more from coming.

These protests that took place Saturday across Canada are in solidarity with the massive demonstration in Ottawa, dubbed “Freedom Convoy 2022.”

The convoy action initially began as a protest by truck drivers opposed to the federal government’s vaccine mandate requiring truckers crossing back into Canada from the United States to be fully vaccinated if they wish to avoid a 14-day quarantine upon reentry. It soon evolved into a national movement—and then worldwide—as large convoys of trucks converged in Ottawa to stage a protest on Jan. 29, with many supporters from around the world joining in to call for an end to all COVID-19 mandates and restrictions.

On the morning of Feb. 20, Ottawa police said they have arrested 191 people and had 57 vehicles towed as law enforcement continues operations in the nation’s capital to clear away protesters opposed to COVID-19 mandates.

Limin Zhou and The Canadian Press contributed to this report.