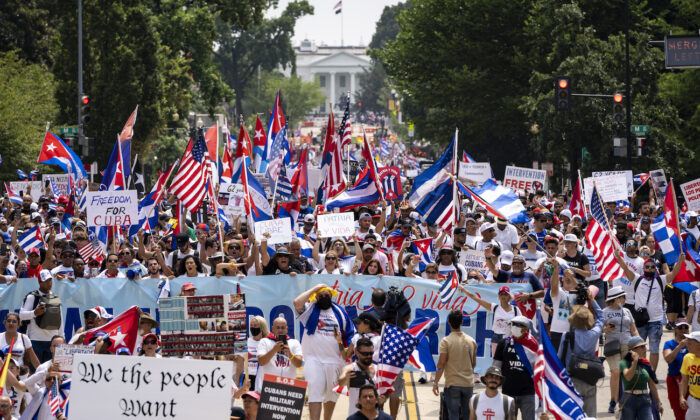 Cuban activists and supporters march from the White House to the Cuban Embassy on 16th Street during a Cuban freedom rally in Washington on July 26, 2021. (Drew Angerer/Getty Images)
US News

Thousands of people protested in Washington overnight on July 25 and 26 to show their support for Cuban citizens, calling on the Biden administration to take more action against the island’s communist regime.

Protesters repeatedly chanted “Libertad!” after dark at the gates of the White House, according to a video uploaded by Rep. Maria Elvira Salazar (R-Fla.) on Twitter at 1:48 a.m. ET on July 26.

“The #CubanAmerican community is at the @WhiteHouse demanding freedom for #Cuba,” she wrote.

The protest comes after thousands took to the streets on July 11 in mass protests across Cuba, calling for greater freedoms and an end to the country’s communist dictatorship. The July 11 protesters raised concerns about ongoing shortages of food and other goods, high prices, and power cuts, amid a deep economic crisis in the country.

Around 12:30 p.m. on July 26, protesters gathered at Lafayette Square, located across the street from the White House, and held a rally, after which they paraded across many blocks to the Cuban embassy.

Multiple videos posted on social media showed the packed crowd of protesters steadily moving toward the Cuban embassy holding banners and signs calling for freedom, as well as waving Cuban and American flags.

“The people of Cuba have taken to the streets demanding one thing and one thing only: freedom!” Salazar said in a statement. “The Castro regime has cut off the internet on the island to hide how their thugs brutalize and repress the Cuban people. The United States must help the Cuban people get back online so they can organize freely and denounce the repression they’re facing.”

Scott joined House Republican Leader Kevin McCarthy, Sen. Marco Rubio (R-Fla.), and other members of Congress in issuing a letter on July 26 (pdf) seeking a meeting with President Joe Biden on how the White House can work with Congress to support the Cuban people’s fight for freedom.

In the lead-up to the Washington rally, the event’s Instagram account, @Cubanfreedommarch, on July 16 called for Americans to “fight on behalf of our brothers and sisters in Cuba.”

Alian Collazo of Largo, the organizer of the event and a Cuban refugee, told FOX 13 Tampa Bay that what the protesters are rallying about “is not just a Cuba and Cuban American issue.”

“This is not just a south Florida issue. I think that’s important for the world to know,” Collazo told the outlet. “The Cuban regime is a dangerous regime that destabilizes the world and the Western Hemisphere.”

The rally took place on the same day as the 68th anniversary of the Cuban Revolution. Organizers wrote that instead of calling it “Día de la Revolución” (Revolution Day), July 26 would be dubbed “Dia Para la Libertad” (Freedom Day).

The July 11 protests across Cuba marked the largest protest in the communist-ruled nation in decades. The Cuban regime has responded to the protests by reportedly arresting more than 500 demonstrators, blocking access to the internet, and sending Communist Party militants and paramilitary forces to cities and towns. It’s therefore unclear how many further protests have taken place in Cuba since then.

In a statement on July 26, Secretary of State Antony Blinken announced that the United States and 20 other countries support the Cuban freedom protesters while calling on the Cuban regime to release the demonstrators and restore their internet access. The regime had cut internet access as the protests erupted, stopping citizens from uploading footage of the mass protests for the world to see.

“The United States will continue to support the Cuban people’s desire for freedom and to determine their own future. This joint statement demonstrates that the Cuban people are not alone in their aspirations,” Blinken said.

On July 22, the Biden administration authorized sanctions against the Cuban Minister of Defense and a Cuban government agency for their role in suppressing the protests.

“The United States stands with the brave Cubans who have taken to the streets to oppose 62 years of repression under a communist regime,” Biden said in a statement.

The Biden administration also said that it has been “actively collaborating with the private sector to identify creative ways to ensure that the Cuban people have safe and secure access to the free flow of information on the internet.”

The Cuban regime is accused of having adopted China-made technology systems that allow it to control and block internet access.