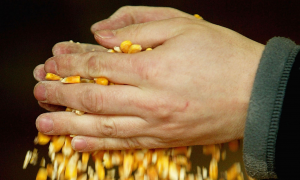 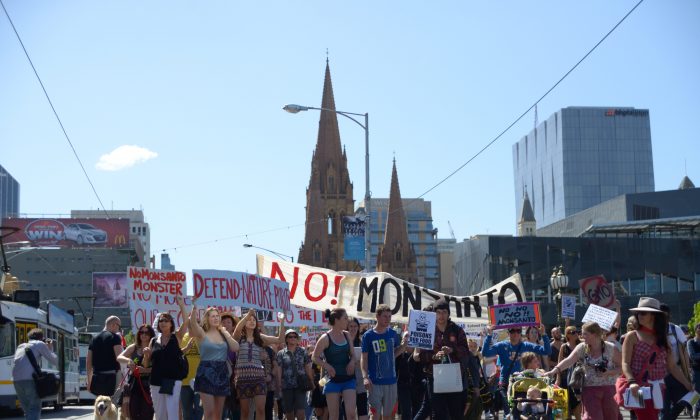 The March Against Monsanto movement held 500 marches in 57 countries, including 14 cities across Australia, to protest the impacts of GMOs and agricultural biotech giant Monsanto on the global food chain on October 12. The marches were organised to coincide with the United Nations’ World Hunger Day on Oct. 16. (Win Naing/Epoch Times)
Asia & Pacific

Thousands of people across Australia joined a global movement of 3 million saying no to genetically modified foods and herbicides on Oct 12, in the lead up to World Hunger Day.

The March Against Monsanto movement held 500 marches in 57 countries, including 14 cities across Australia. The movement aims to raise awareness of agricultural biotech giant Monsanto and the impacts of genetically modified organisms (GMO) on the global food chain. The marches were organised to coincide with the United Nations’ World Hunger Day on Oct 16.

Monsanto is the world’s leading producer of genetically engineered (GE) seed and the herbicide Roundup. The company owns over 90 per cent of patents on GE seed worldwide. Their Roundup herbicide contains the toxic chemical glyphosate, which has been found to cause cancer, birth defects and neurological development problems in children, according to research published by the European Commission.

In Melbourne, around 1000 protesters marched down Swanston Street in the CBD, waving banners and chanting slogans, such as: “We want the right to know if our food is GMO.” A rally was then held alongside Southbank’s restaurant precinct, surprising many patrons having a quiet lunch.

Bob Phelps from Gene Ethics, who has been advocating for chemical- and GM-free food since 1988, says the Melbourne march helped to launch a petition calling on local councils to stop spraying Monsanto Roundup weed killer in their areas. The petition calls for local councils to adopt similar practices to those in Sydney and Perth, where non-chemical means such as weed steamers are used to eradicate weeds.

Jessica Harrison of GM-Free Australian Alliances says Monsanto’s herbicides are used on more than just food crops and as such pose a serious threat to public health. “Roundup is liberally sprayed on footpaths, playgrounds, parks, golf courses and farms, even though a robust body of scientific evidence now shows that the weed killer’s ingredients are toxic poisons,” she said.

Another speaker, Cyana from Daylesford, shared her personal story about suffering from glyphosate contamination. Her doctor found the toxin in her lymphatic system and diagnosed it as the cause of her chronic pain and fatigue. Cyana believes she contracted the chemical poisoning near her home in the Wombat State Forest, where a nearby pine tree plantation uses Roundup herbicide.

Monsanto spokesperson Adam Blight says the company believes people have the right to march against GMOs and herbicides, but maintains that GM foods are safe for human consumption.

“GMs have been around for quite a few years now. Three trillion GM meals have been eaten and there has never been a single substantiated case of harm,” Mr Blight said.

“Roundup has also proven to be a very safe and effective herbicide used in countries all over the world for many years now.”

The first March Against Monsanto event on May 25 drew around 2 million worldwide, with 10,000 in Australia alone. The second event on Oct 12 drew 3 million worldwide and was scheduled to precede the UN’s World Food Day, which focuses on building sustainable food systems and ending world hunger.

With additional reporting by Desmond Ford and Julia Huang