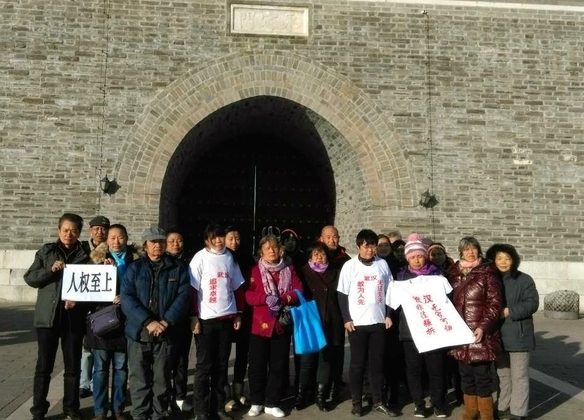 A group of rights protesters put up banners calling for human rights, in Beijing on Dec. 9, 2014, the day before world Human Rights Day. (Screenshot/Human Rights Campaign in China)
China

Thousands in Beijing Protest for Their Rights on Human Rights Day, Are Arrested

While International Human Rights Day is celebrated around the world, in Beijing the day was marked by security rounding up and detaining those who dared to complain about violations of their rights.

On Wednesday—Human Rights Day—many petitioners showed up at Liangmaqiao Station, a subway station in Beijing close to many foreign embassies, in the hope of raising awareness in international society of the deteriorating human rights condition in China.

Beijing police were arrayed to meet the petitioners, with the train stations and streets near the embassies heavily guarded.

Petitioner Wang Fang from Wuhan City, Hubei Province said all the 50-some petitioners from Wuhan, including herself, were captured at Liangmaqiao Station by police, according to New York-based New Tang Dynasty (NTD) television.

“Police officers and police cars were everywhere near Liangmaqiao,” Wang said. “Every subway exit was guarded with 40 to 50 police and several police cars. All the captured petitioners were sent away in large buses to Jiujingzhuang.”

Jiujingzhuang is an extra-legal detention center in suburban Beijing that detains and makes records of the petitioners. Wang said she escaped from the bus she was on when many buses filled with petitioners were waiting in line to get into Jiujingzhuang.

Yin Xu’an, a petitioner from Hubei Province, said police strictly checked IDs at the train station exits, and frequently arrested petitioners, the NTD report stated. Yin explained that petitioners who have been detained before all have records in the police identification information system.

“They [police] check your ID as long as you look a little like a petitioner,” Yin said, “If you are a petitioner, their identification equipment will recognize it. They immediately pull you into the vehicle.”

Yin said he witnessed eight large buses fully loaded with arrested petitioners driving away from the site within 40 minutes.

Yu Nanzhe, a petitioner from Jiangsu Province, told NTD that police examined people’s bags, and once police found materials for protesting in their bags, the police forced those petitioners onto prearranged buses.

This week thousands of petitioners with grievances have come to Beijing, and protested in different places, such as Tiananmen Square, foreign embassies, the headquarters of China Central Television, among others.

On the day before Human Rights Day, over 100 Chinese petitioners put up banners in front of the Yongdingmen Square in central Beijing, urging the Chinese Communist Party to implement the Universal Declaration of Human Rights, according to Sound of Hope (SOH) radio.

The demonstration was soon interrupted by police. Petitioner Li Zhiguo from Henan Province participated in the protest and told SOH that the demonstration lasted for about 20 minutes with over 100 petitioners yelling slogans and holding banners.

“Then the police came, crushing my banner and cellphone. They didn’t allow us to stay there and took our stuff away. We ran away. Some other [petitioners] were taken away by police,” Li said.

“Chinese petitioners live lives worse than the grass in Beijing,” Li said. “Our human rights are harmed. We come to Beijing and sleep on the streets. We have been chased and arrested by police here and there. … No one takes care of our disputes. … When we attempted to visit the central inspection officials to report the issues, we were blocked and beaten. We called the central inspection teams, and no one answered the phone.”