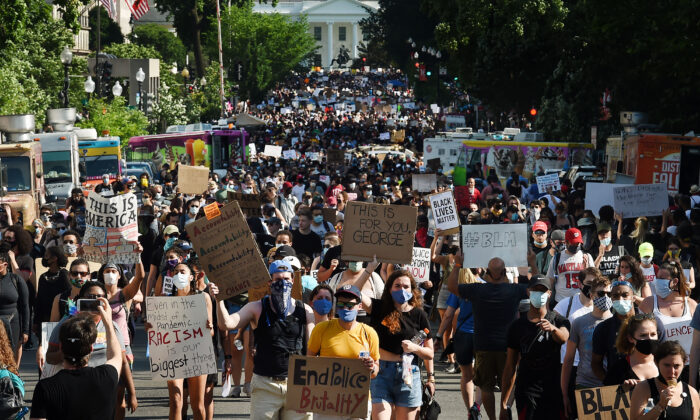 Protesters march near the White House during a demonstration against racism and police brutality on June 6, 2020. (Olivier Douliery/ AFP)
US News

WASHINGTON—Thousands of protesters gathered at the nation’s capital on June 6, coming together in the hope of inspiring “meaningful change” in policing following the death of George Floyd in police custody.

While a mix of all ages and ethnicities joined the protest, the majority of protesters appeared to be black and younger than 40.

With the sun still up at 7:30 p.m., the atmosphere was peaceful and unified.

The protest in the nation’s capital was shaping up as the largest of the marches seen this week in cities and towns nationwide, as well as around the world. It coincided with a second memorial service for Floyd, 46, in North Carolina.

Several protesters told The Epoch Times that they were encouraged by the presence of different ethnicities.

“At first, I wasn’t going to come. But then I just saw all the solidarity and unity … people of all races were down here, and I was like, ‘This is about me as a black man, I gotta come there,’” said Mark Jackson, 55.

“It does make me proud to be an American to know that we can come out here and do this. Most people are good and decent, and are out here for good reasons. That inspires me,” she told The Epoch Times.

She said she’d been frustrated that Americans are still having to talk about policing issues in 2020, but that the protests had changed her mind, leaving her feeling more optimistic.

“At least it’s being brought to the forefront a little bit—that part is inspiring,” she said.

The death of Floyd, who died after a Minneapolis police officer knelt on his neck for nearly nine minutes during an arrest last month, has sparked a nationwide uproar with occasional looting, arson, and vandalism.

Chauvin’s wife, who is of Hmong descent, has filed for a divorce.

While most protesters mentioned stopping police brutality as the primary reason they joined the protest, they expressed different views in their specific objectives.

Ressa M., a 33-year-old resident of Washington, told The Epoch Times that she felt material policy changes are necessary at the federal and state level.

“I think that protests and shows of support for the movement will continue until we see meaningful change. By meaningful change, I mean policy and action that will hopefully prevent such things from happening in the future,” she said.

Lauren D., 33, also a Washington resident, joined the protest with a more specific objective. She was calling to demilitarize the police.

“The police have way too much power, and they’re not trained well enough. It’s not necessary for them to have warlike materials and supplies just to defend and protect civilians,” she said. “This is not wartime.

“They need to go back to protecting and serving. … When the citizens disagree with how the state is acting and we’re coming out to protest, [they] can’t just quash the protest. We have our First Amendment rights.”

Some joined the protests without specific requests to lawmakers and government, just wanting to show their solidarity for black Americans.

“I’ll tell you that I don’t, I don’t necessarily know. I’ve seen people out here with different beliefs,” James Graham, a protester from Northern Virginia, told The Epoch Times when asked about his specific objective of joining the protest.

He said he was walking away from the protest with “a lot of hope” for the future of the country.

While some protesters condemned the rioting amid the mostly peaceful protests, others expressed tolerance of the violence to different extents.

Alex said she believes that that violence amid the protests must be stopped.

“It’s dangerous. It’s unfortunate that it’s gotten to this point. I can understand people are really angry and don’t feel listened [to],” she told The Epoch Times. “I think there are people who are taking advantage of the larger situation and circumstances.”

Robin Riddick, a D.C. resident, told reporters that he doesn’t agree with protesters who are violent.

“But I’ve noticed that, as the days have gone by, it’s been more peaceful and more peaceful. We will learn how we can still be out here and get our voices heard without tearing up [society],” she said.

However, some protesters seemed to suggest that some property damage was acceptable to them.

“That’s just a consequence of the movement, unfortunately, but those things can be replaced,” Lauren said. “It’s not a human life that has been lost.”

Lauren emphasized that the communities have come together to rebuild after the damage done.

“People’s homes might have been burned down or businesses; the community has also come together to support and donate to GoFundMe to help these people rebuild,” she said. “So … there might have been damage, but people are already getting the funds that they need to rebuild, so there’s not really any consequence there.”

Graham also held the view that property damage was an acceptable aspect of the protests.

“I’m not worried about property. Property is not important on the grand scale of lives,” he said.

But he said he drew the line at loss of life, saying that such behavior is “disgusting.”