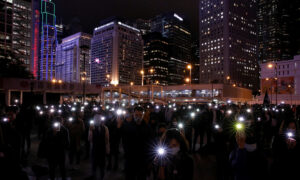 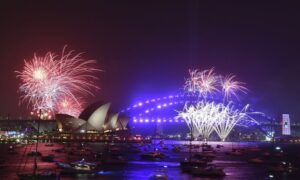 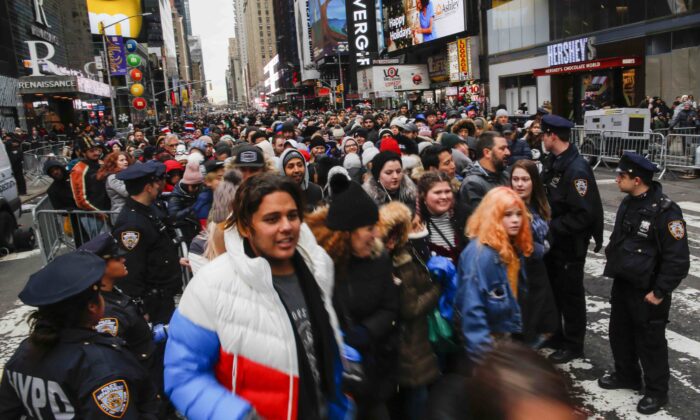 NYPD officers try to control the arrival of people to celebrate New Years eve in Times Square in New York City on Dec. 31, 2019. Because of the mild weather, a larger than usual crowd of people visiting from all over the world is expected to watch the ball drop. (Eduardo Munoz Alvarez/Getty Images)
US News

Thousands Gather in Times Square to Ring in 2020

Thousands of wrapped-up revelers made their way to Times Square in New York for a night of celebrations as they prepared to ring in 2020.

Up to 1.5 million people are estimated to crowd Times Square for Tuesday night’s confetti-filled festivities and traditional crystal ball drop that will count down to the new decade, according to the NYPD.

A slate of performers including American rock band X Ambassadors, Post Malone, and Alanis Morissette entertained merrymakers with performances as they held out for the midnight countdown during the New Year’s Eve celebration in the heart of Manhattan.

This year’s festivities will see temperatures of about 34 degrees—a contrast to last year’s celebrations which saw thousands brave pouring rain as they watched the glowing New Year’s Eve ball complete its midnight descent to mark the start of 2019.

Many spectators donned purple and yellow sequin oversized top hats handed out by organizers as they waited in anticipation for the stroke of midnight.

Twins Erica and Kendra Carson, 22, told the New York Post it took them nearly 24 hours to drive from Bowmanville, Ontario, to make it to the famed Manhattan crossroads.

“I have always watched it on television but to see it in person, to join in the countdown, people getting excited, screaming with all the people and the confetti falling all over us, it’s going to be very surreal,” Kendra told the news outlet.

The NYPD’s Deputy Commissioner for Intelligence and Counterterrorism, John Miller, has said he expects Times Square this year to be “be the safest place on the planet Earth on New Year’s Eve.”

“Nobody else puts that kind of effort into an event like this,” Miller said.

Thousands of police officers will be on duty for Tuesday night’s festivities, along with specialized units armed with long guns, bomb-sniffing dogs, and other measures.

Police Commissioner Dermot Shea said there are no specific, credible threats to the event, which brings hundreds of thousands of people to midtown Manhattan and attracts millions of TV viewers.

Shea said spectators should feel safe but encouraged them to remain vigilant and encouraged people to alert an officer or call a police hotline if they feel something is amiss.

“This is going to be one of the most well-policed, well-protected celebrations in the entire world and we’ll have another safe and enjoyable New Year’s Eve,” Shea said.

Streets in and around Times Square will be closed to car traffic hours before the ball drops, and police cars and sand-filled sanitation trucks will be positioned to stop vehicles from driving into the crowd.

Everyone showing up for the celebrations should expect to be wanded with metal detectors before being ushered to one of 65 viewing pens set up around Times Square to prevent overcrowding.

Backpacks, chairs, and coolers are banned, as well as personal drones. The NYPD says alcohol is strictly prohibited.

There aren’t any bathrooms, and anyone leaving won’t be allowed back to their original spot.

The tradition of watching a giant ball drop from a pole on top of the narrow building at the head of Times Square in midtown Manhattan began in 1907.

The ball in current use—a glittering, LED-studded sphere made by Waterford Crystal and Philips Lighting—made its debut in 2008. Weighing 11,875 pounds and measuring 12 feet in diameter, it sits year-round on the roof of One Times Square.