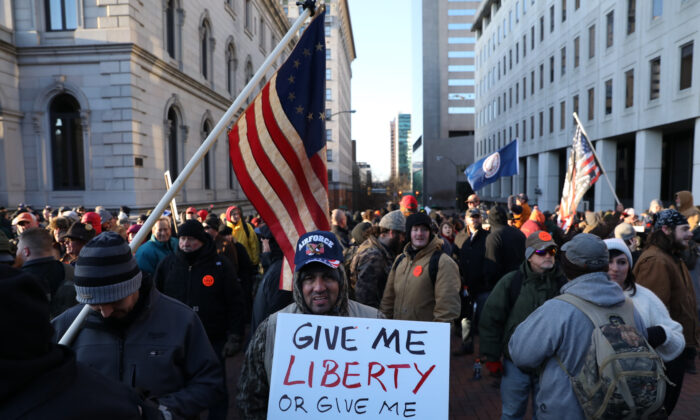 Thousands Gather at Virginia Capitol in Support of 2nd Amendment

Thousands of people gathered at Virginia’s state capitol to protest proposed gun bans as officials attempted to tighten security ahead of the events.

One demonstrator, who identified himself as internet radio host Doc Greene, told local outlet WUSA9’s during a live stream that the Virginia state legislature is proposing “historically bad ideas” by trying to clamp down on gun ownership. He said one of the reasons why he and numerous others have descended on the capitol is to show others who have strong feelings about protecting the Second Amendment that “they’re not alone.”

“What’s at stake is our gun rights,” one rally-goer told Breitbart News during its live stream. Another said that the Second Amendment is to “keep tyrants in place,” and suggested the governor was one.

Around 6,000 people said on the event’s Facebook page that they planned to attend.

The rally comes days after Virginia Gov. Ralph Northam, a Democrat, declared a state of emergency at the capitol grounds ahead of the rally. He said at a press conference that his office “received credible intelligence from our law enforcement agencies that there are groups with malicious plans for the rally that is planned for Monday.” He continued, “Intelligence shows the threat of armed militia groups storming our capitol.”

The event is being organized by gun rights group Virginia Citizens Defense League (VCDL). VCDL Lobby Day is an event that has been held at the capitol for the past two decades on Martin Luther King Jr. Day.

The emergency ban drew several legal motions, with the VCDL attempting to overturn the gun ban in court. A judge last week upheld Northam’s ban, while Virginia’s state Supreme Court declined to hear a challenge, effectively leaving the state of emergency in place.

But Northam told reporters that he’s confident that most of the attendees will be peaceful. Last week, the FBI arrested suspected members of a white supremacist group called “The Base” who were planning to attend the rally.

“My hope is that everyone traveling to Richmond tomorrow is coming with peaceful intentions and the day will pass without incident,” Virginia state Attorney General Mark Herring, a Democrat, wrote Sunday on Twitter. “Our country was founded on free speech and a right to assemble. We can protect those rights while ensuring Virginians are safe.”

Virginia House of Delegates Minority Leader Todd Gilbert, a Republican, said in a statement that “any group that comes to Richmond to spread white supremacist garbage, or any other form of hate, violence, or civil unrest isn’t welcome here. Thousands of law-abiding Virginians simply want to have their voices heard at the seat of government.”

The rally comes as the legislature’s proposed laws restricting firearms were met with opposition in dozens of counties and municipalities across Virginia. Since November, more than 100 counties, sheriff’s departments, and municipalities have declared themselves Second Amendment sanctuaries.