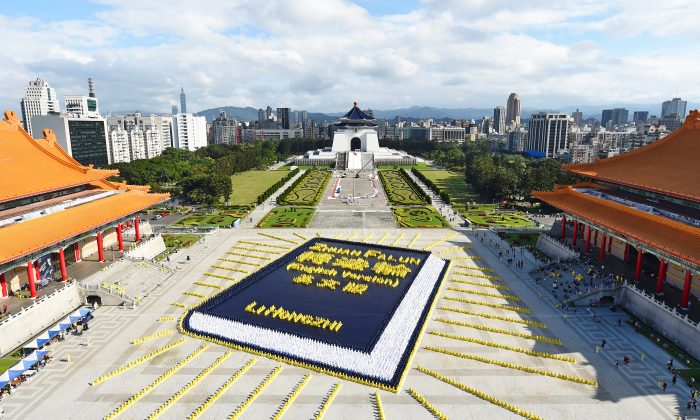 About 5,400 adherents of Falun Gong gather in Taipei's Liberty Square in Taiwan to form an image of the English-version of the book "Zhuan Falun" on Nov. 24, 2018. (Sun Hsiang-i/The Epoch Times)
Asia & Pacific

TAIPEI, Taiwan—More than 5,000 people gathered in Taipei’s iconic Liberty Square on Nov. 24 to form an image of a book that has helped to guide tens of millions of people around the world on self-improvement.

The book, “Zhuan Falun,” is the main book of teachings for the spiritual practice Falun Gong, also known as Falun Dafa, a traditional meditation practice based on the principles of truthfulness, compassion, and tolerance. Its founder, Li Hongzhi, introduced the practice in a series of public lectures in 1992.

The image of the book’s English translation was assembled by roughly 5,400 adherents of Falun Gong from around the world, who were clad in dark blue, yellow, and white and sat on corresponding color-coordinated mats that made up the outline of the image.

The multiple yellow stripes coming out of the book cover represent rays of light.

Local Falun Gong practitioners in Taipei placed all 5,000-plus mats required to stage the image formation, over the course of three days beginning on Nov. 21, sometimes under drizzling rain.

Character formation is a tradition dating back to before the Chinese regime began persecuting the practice in mainland China in 1999. Feeling threatened by the group’s enormous popularity—there were about 70 million to 100 million practitioners in China by the late 1990s, according to official estimates—former Chinese Communist Party leader Jiang Zemin ordered adherents around the country to be thrown into prisons, brainwashing centers, and labor camps, in an effort to force them into giving up their faith.

Unlike China, adherents in Taiwan have been allowed to practice their faith freely.

After the persecution began, Taiwanese practitioners wanted to keep the character formation tradition alive, for the purpose of bringing awareness to the ongoing persecution in mainland China. The image formation has become an annual event in Taiwan since 2000.

Of the 5,400 adherents who attended, about 600 came from other countries, including Japan, Vietnam, South Korea, Malaysia, Singapore, Hong Kong, Canada, Australia, Sweden, Brazil, and Finland.

Wu Ching-hsiang, a retired architect and a Falun Gong adherent, drafted the blueprint for the character formation. He explained the reason why the cover image of the English-version of “Zhuan Falun” was selected this year, in an interview with Minghui.org, a U.S.-based website that is dedicated to reporting about the persecution of Falun Gong in China.

“The book is very popular worldwide. It is translated into 40 different languages,” Wu said. “Images of this character formation will now be seen on the internet. So we hope that more people would come to know about this book, for it has benefited so many people physically and mentally.”

Huang Chun-mei, the activity’s organizer and deputy chairman of the Taiwan Dafa Association, said that she hopes there will be opportunities to assemble cover images of “Zhuan Falun” in different languages in the future.

Mr. Chen, an engineer from Chongqing City in mainland China, was also at Liberty Square while on a trip to visit Taiwan.

“Truthfulness, compassion, and forbearance are important for the stability of any society,” Chen told Minghui.org. He added that Beijing should end its persecution of Falun Gong adherents in China.