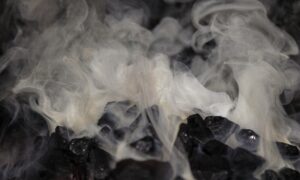 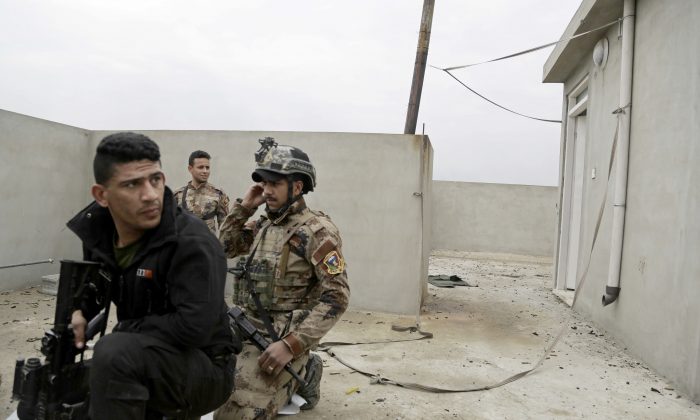 MOSUL, Iraq—Thousands of civilians fled Mosul overnight as Iraqi forces advanced north of a sprawling military base near the city’s airport on Friday.

Iraq’s special forces pushed into the Wadi Hajar district in western Mosul and retook the area from the ISIS terrorist group Friday, according to Brig. Gen. Yahya Rasool, spokesman of the Joint Military Operations.

Special forces Brig. Gen. Haider al-Obeidi said clearing operations were ongoing in the area and his forces were close to linking up with the militarized federal police forces who were pushing up along the western bank of the Tigris river.

Iraqi forces, including special operations forces and federal police units, launched an attack on the western part of Mosul nearly two weeks ago to dislodge ISIS. Since the offensive began, more than 28,000 people have been displaced by the fighting, according to the United Nations.

“All the families were hiding behind a wall,” she said, explaining how they escaped an ISIS-held part of the city. “We gave the children valium so they wouldn’t cry and (the ISIS fighters) wouldn’t catch us.”

Ahmed, like most of the civilians who have escaped Mosul in the past week, fled through Mamun neighborhood. The district is partially controlled by Iraq’s special forces.

Maj. Saif Ali, who is stationed in Mamun, said huge crowds of civilians began pouring into the area from neighboring districts just after midnight. Ali said civilians in western Mosul are becoming increasingly desperate as food and water supplies begin to run out.

“In total 7,000 people fled through this area last night,” he said. “We were up all night trying to control the crowds.”

By late morning nearly all the families had been moved out of Mamun. The neighborhood was littered with discarded clothing and blankets piled up in empty lots and on street corners.

Iraqi forces deployed east of Mamun advanced into Wadi Hajar, a neighborhood north of the Ghazlani military base.

The International Committee of the Red Cross said seven patients likely exposed to a toxic chemical agent were currently being treated at Rozhawa hospital, close to Mosul, where fighting is ongoing.

“During the past two days, the hospital has admitted five children and two women showing clinical symptoms consistent with an exposure to a blistering chemical agent,” said the ICRC’s Regional Director for the Middle East, Robert Mardini, adding “We strongly condemn any use of chemical weapons, by any party, anywhere.”

At a screening center south of the city, hundreds of women and children were gathered on the cement ground of an old gas station as men were screened in a parking lot next door. An Iraqi intelligence officer walked with an informant past the rows of men and boys sitting on the ground before they had their names checked against a database.

“We waited until all the ISIS fighters left the streets,” he said, his track suit covered in mud from the journey. Younis walked for hours, crossing more than five kilometers (three miles) with his mother, father, brother and sister.

“There were mortars and we could hear gunfire,” Younis said. He said explaining his younger siblings were so scared at times he had to carry them. “But we had to flee, we had run out of food.”