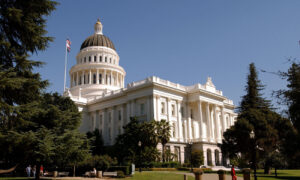 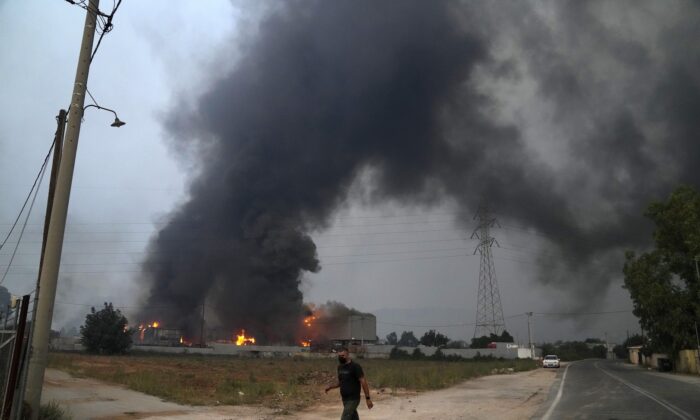 A car recycling plant is on fire during a wildfire in Afidnes village, about 19 miles (31 kilometres) north of Athens, Greece on Aug. 6, 2021. (Thanassis Stavrakis/AP Photo)
Europe

Thousands of Greeks on the outskirts of Athens have fled their homes on Friday as a resurgent wildfire burned homes north of the capital, with firefighting crews struggling to stop the blaze from spreading.

“We are continuing our efforts, hour by hour, to tackle multiple fires today,” Deputy Civil Protection Minister Nikos Hardalias said, as authorities ordered the evacuation of more suburbs north of the Greek capital, where wildfires on the foothills of Mount Parnitha burst back into life late on Thursday.

The blaze, which first broke out on Tuesday and has since spread to more than 50 active fronts across the country by Friday, has kept firefighters occupied day and night. The wildfires have already destroyed or seriously damaged dozens of homes and businesses.

“A catastrophe,” said farmer Marinos Anastopoulos. “The fire came around midday with swirling winds and homes were burned, a lot of animals burned to death. Rabbits, sheep, dogs, everything.”

Officials said that luckily no serious injuries have been reported so far, adding that about 20 people, including four firefighters, required treatment for minor injuries. The wildfires, however, have destroyed or damaged more than 90 homes and 27 businesses. At least 80 vehicles have been burned.

“We had no loss of human life. … Homes will be rebuilt, and over time the forest will grow back,” he added.

Multiple European nations, including France, the Netherlands, and Cyprus, have sent aid to Greece to help the country’s fire crews against the raging blazes. Israeli authorities said they will also send over a dozen firefighters and a large shipment of fire retardants in a civilian plane as soon as possible.

A heatwave was forecast to continue in Greece until the end of the week. Temperatures have been over 107 Fahrenheit (40 degrees Celsius) with gale force winds expected to spread the flames even further.

In neighboring Turkey, wildfires that have been described as one of the worst in decades, had flames sweep through its southwestern coastal regions for the past 10 days, forcing evacuations for tens of thousands of people. At least eight Turkish residents were killed due to the wildfires so far.