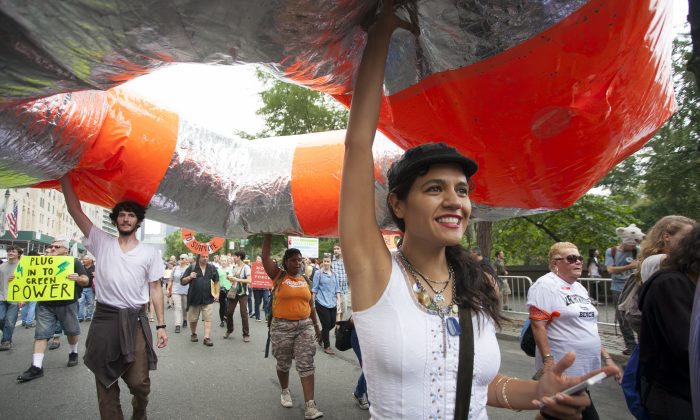 400,000 People of All Stripes Register Climate Change Concerns in NYC

NEW YORK—Anne Morel wants a house with her own chickens—solar paneled and self-sufficient.

“Me, ambitious? No, I’m just scared for this world!” she said of her plans to help the environment.

About two weeks ago, 27-year-old Morel, a graphic illustrator, saw an ad for People’s Climate March on the subway.

“I’m here to defend my planet’s rights,” declared Morel, who came from the French countryside three years ago.

On Sunday, environmental activists clogged the major arteries of New York City—6th Avenue, 42nd Street, and down 11th Avenue—for an estimated 310,000 strong, according to organizers.

Men and a few women standing on the sidelines wore costumes, did handstands, or played the tambourine, in a race for public attention.

People chanted slogans like “We will save planet earth!” and “We don’t want your dirty water!” Posters ranged from dramatic (“Nature is not a luxury”) to hilarious (“Stop King Cong—Coal, Oil, Nuclear, Gas”).

At 12:58 p.m. the crowds quieted for a moment of silence to honor those from communities hurt by storms and severe weather. Then at 1 p.m., people screamed and yelled as much as they could—with the aid of 32 marching bands and ringing church bells—to symbolically sound the alarm on climate change.

“There has to be some sort of wake-up call,” said Cathy Grier, 54, a singer-songwriter musician who performs in the subway by the moniker “NYC Subway Girl.” She brought two gray poodles, Etta and Lily, to Sunday’s rally.

“We’re exporting this insane consumption throughout the world and it’s completely unsustainable…look at what happened to the nuclear power plants in Japan,” she added.

History writer Gretchen Dykstra, 66, traveled from the Hudson Valley to attend with her friends because she believes “this is the single most important issue facing the world.”

Although Dykstra hasn’t been personally affected by climate change, she takes heavy note of weather changes and visited the Museum of Natural History Saturday to check how many animals are now extinct.

“It’s important to show the folks in the United Nations that there are a lot of people who care deeply about this issue,” said Dykstra. “And then I think that the immediate change will be minimal but the long-term change will be hopeful.”

Teachers used Sunday as an opportunity to get their kids more involved with the larger community fighting climate change. The Environmental Club from McNair Academic High School in Jersey City sent 10 kids to attend.

Philip Nguyen, 17, one of the club members, joked, “It’s kind of like a school field trip but unofficial.”

Nguyen does his part for the environment too: he recycles, bikes once in a while instead of getting in a car, and does car pools.

President of the school club, 17-year-old Tasmina Tazin spoke of how world leaders would be paying attention to the more than 20 blocks of people waving flags and posters.

“Even Barack Obama—he was influencing people to come here; he was like #walkthewalk,” said Tazin.

With scores of people, Sunday’s march is certainly eye-catching. But many admitted that the rally was not a cure-all for environmental problems.

“I realize this parade’s not going to make an incredible difference,” said Paul Drougas, 54, a book editor, “But it’s just so people take notice. Look, people from babies to people in their 80s are here.”

In his job, Drougas had spoken to many authors about climate change.

He says that so much damage has already been done that “it’s going to be tough to prevent really big problems in the future.”

Director of the Center for the Study of Science Patrick Michaels from The CATO Institute, a libertarian think tank funded by the Charles Koch Foundation, views the march as a PR event that won’t bring much change to the environmental situation.

He mentioned that five nations—China, India, Canada, Australia, and Germany—will not be sending heads of state to Tuesday’s United Nations summit, which will deter effective decision-making.

Additionally, the United States needs a majority in the Senate to pass legislation that would alleviate climate change, unless President Obama uses his executive powers.

“My bottom line is when you realize all these things, the march is pretty futile,” said Michaels. “There will be much feeling good, but talk and walk is cheap.”

Michaels explained that with the United States’s growing population, it would be unlikely to reduce greenhouse gas emissions by even 25 percent.

For Dykstra, the problem is not just population.

“Population is an issue, but also the greed of individuals—and particularly, corporations,” said Dykstra. “No matter where on the political spectrum you fall: big money and politics, whoever they might be, is destroying our democracy.”

To save the environment on an individual-level, Dykstra limits her driving and air-conditioner use and had her house recently insulated.

On the streets of New York, others are less conscientious.

Grier noted that as she walks around in the summertime, businesses keep their air-conditioners on full-blast to attract customers.

“It just drives me nuts!” said Grier of the pet peeve.

But although Sunday’s march gives attendees a chance to air their grievances, Grier wouldn’t call it a protest march.

“I don’t want to protest,” said Grier, who grew up in the civil rights era and sang for no nukes, “I want to forward think. Right now, it’s a feel-good moment. And to see so many young people here is great because it’s their future. It’s your future.”

Her new home just might be in Staten Island, in a suburbia that recalls France’s countryside. “I prefer it there, it’s more residential. And there are more trees,” she said.