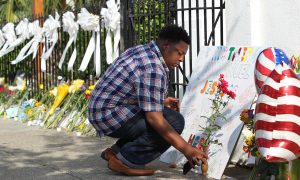 CHARLESTON, S.C.—The first black president of the United States is coming to Charleston to eulogize the victims of a mass shooting at a historic African-American church — a tragedy that one civil rights activist said was a sign of “how far yet” the nation has to go to put racial tensions behind it.

Thousands of mourners were expected to gather Friday to hear President Barack Obama pay tribute to the pastor and eight parishioners of the Emanuel African Methodist Episcopal Church. The nine were slain at the church during a Bible study session last week in what authorities are investigating as a racially motivated attack.

Friday’s service for the Rev. Clementa Pinckney, who was also a state senator, promised to be another wrenching but cathartic occasion for the community to say goodbye to the victims.

Police planned to close several streets around the college arena in downtown Charleston, and said they expect anyone who wants one of the more than 5,000 seats to be there by 9 a.m. The funeral was scheduled to start two hours after.

The first two funerals, for Ethel Lance and Sharonda Coleman-Singleton, were held Thursday, with tight security and emotional responses to the eulogies and hymns.

Sharpton noted that on the day of the shootings, he was in Washington watching Loretta Lynch being sworn in as the nation’s first black female attorney general. “That morning, I saw how far we have come,” Sharpton said. “That night,” after the shooting, “I saw how far yet we have to go.”

Police officers stood guard and checked bags as mourners filed in for the funerals, which were held as the debate over the Confederate flag and other Old South symbols continued around the region. A growing number of leading politicians said Civil War symbols should be removed from places of honor, despite their integral role as elements of Southern identity.

“A hateful, disillusioned young man came into the church filled with hate … and the reaction was love,” Riley said at the funeral for Coleman-Singleton, 45. “He came in with symbols of division. The Confederate battle flag is coming down off our state Capitol.”

Before the second service, more than 100 members of Coleman-Singleton’s Alpha Kappa Alpha sorority formed a ring around the main part of the large sanctuary as part of an Ivy Beyond the Wall ceremony. One by one, the women, clad all in white, filed past the open casket with green ivy leaves, then clasped hands and sang.

Lance had served as a sexton at Emanuel for the past five years, helping to keep the historic building clean. She loved gospel music, watched over a family that grew to include her five children, seven grandchildren and four great-grandchildren, and pushed them to earn advanced degrees.

“I want my grandmother’s legacy to be what she stood for,” said granddaughter Aja Risher. “She is going to be a catalyst for change in this country.”

Haley started the groundswell against Confederate icons Monday by successfully calling on South Carolina lawmakers to debate taking down the Confederate battle flag flying in front of the Statehouse. Then Alabama Gov. Robert Bentley, also a conservative Republican, brought down four secessionist flags at the Capitol in Montgomery.

Some authorities have worried openly about a backlash as people take matters into their own hands.

“Black Lives Matter” was spray-painted on a monument to Confederate President Jefferson Davis in Richmond, Virginia, on Thursday, only the latest statue to be defaced. On Tuesday and Wednesday, African-American churches in Charlotte, North Carolina; and Macon, Georgia; were intentionally set afire.

But in Charleston, the early gestures of forgiveness by the victims’ families toward a shooting suspect who embraced the Confederate flag set a healing tone that has continued through a series of unity rallies.

The suspect, 21-year-old Dylann Storm Roof, appears with a Confederate license plate, waving a Confederate flag, burning and desecrating U.S. flags, posing at Confederate museums and with the wax figures of slaves on a website created in his name months before the attacks.

Attorney Boyd Young, who represents Roof’s family, issued a statement saying they will answer questions later, but want to allow the victims’ families to grieve. “We feel it would be inappropriate to say anything at this time other than that we are truly sorry for their loss,” the statement said.