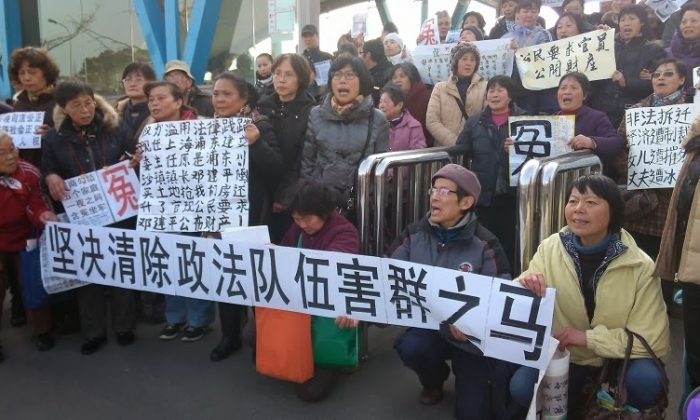 Petitioners hold banners at the Shanghai Expo Center, site of the annual political "Two Sessions." One banner reads, “Clear Away the Black Horse in Political and Legislative Affairs Committee!“ Jan. 19, 2014. (Provided by a petitioner)
China

Every day since Jan. 18, thousands of Shanghai petitioners, armed with grievance documents and banners, tried to make their way to the Expo Center, hoping for a chance to present their cases to government officials attending the local National People’s Congress and the Shanghai Chinese People’s Political Consultative Conference, also known as the Two Sessions.

Petitioners said they knew full well that they might get arrested and beaten, but many are in a desperate situation, having lost their land and homes through forced evictions with little or no compensation or redress and are now homeless.

Shanghai petitioner Wang Xiaoping told the Epoch Times that petitioners have been going to the Expo Center every day since the conferences began, and many were intercepted by police at subway stations.

“On Jan. 19, there were over one thousand people. Uniformed and plainclothes police and other personnel were waiting in a solid line at the subway to stop petitioners, not allowing them to approach the center,” Wang said.

Dozens of buses were waiting beside the road to move petitioners away from the area.

Tan Lanying, another Shanghai petitioner, said that one of the security personnel stopping petitioners was carrying a very large bag to collect the petitions, and that many petitioners were forced onto buses.

“We are deprived of our houses, and have nowhere to live. We have been persecuted for a long time,” Tan said.

Tan also made reference to the persecution of Falun Gong in China, saying: “Falun Gong practitioners are good people and they are also persecuted.”

Tan said the top officials for the Falun Gong persecution, including former Communist Party Chairman Jiang Zemin and former head of the public security system, Zhou Yongkang, should be brought to justice.

“Shanghai is Jiang Zemin’s haunt. Zhou Yongkang, Jiang Zemin, and other corrupt officials should be arrested and sentenced to death by hanging,” Tan said.

One petitioner, Wang Xiaoping, said: “Two policemen, with badge numbers 030215 and 029843, rushed at me and beat me. They and the security guard hustled me into a small room, locked the door and continued beating me up. I was knocked down to the ground, and they hit me while cursing.”

In Liaoning, Jilin, and Shanxi provinces, where local two sessions are also being held, hundreds of petitioners have also taken to the streets with banners. Police there have also come out in force to silence them.