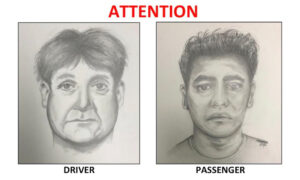 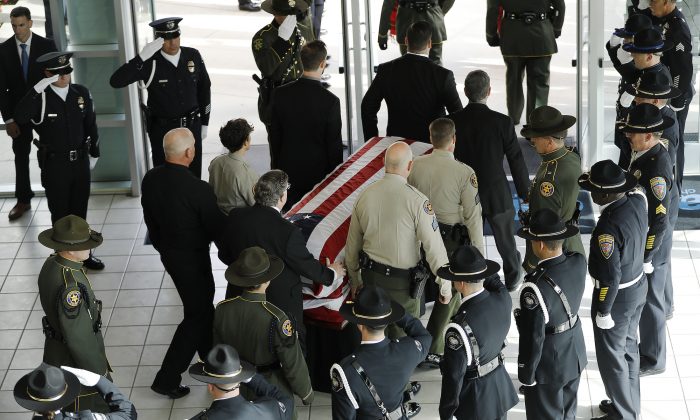 The casket with the body of Ventura County Sheriff Sgt. Ron Helus is carried out after a memorial service at Calvary Community Church in Westlake Village, Calif., on Nov. 15, 2018. (Al Seib / Los Angeles Times)
Southern California

Officials have revealed new details to the public into the investigation of the Nov. 7 shooting at the Borderline Bar and Grill in Thousand Oaks, California that left 13 people dead.

28-year-old Ian David Long was reportedly dressed entirely in black when he opened fire that night at the country dance bar, which was holding a weekly “college night.”

Long then stopped shooting and waited for the first two officers who arrived on the scene, said Ventura County sheriff Bill Ayub, who spoke at a press conference on Nov. 27.

“After shooting the victims inside the bar, the suspect positioned himself in preparation for the law enforcement response,” said Ayub.

“Sergeant Helus and a CHP (California Highway Patrol) officer both entered the bar within minutes and began searching with their rifles. The suspect ambushed the officers almost immediately from a position of tactical advantage.”

Both officers fired back at Long, but neither of them struck him.

During the incident, Sgt. Ron Helus, 54, was hit multiple times and later died of his injuries. He had served the county sheriff’s office for nearly three decades and was set to retire within a year.

Ayub said Long had been armed with a Glock 45-caliber semi-automatic pistol, which he legally purchased in August 2016, as well as a folding knife. As soon as he walked into the building, he immediately started shooting.

He also threw several smoke grenades while he was in the bar, causing further stress and confusion to the victims inside.

Long fired more than 50 rounds in total, but he had enough ammunition to fire a lot more.

“He had seven high-capacity 30-round magazines in his possession. Five of those magazines were found still fully loaded after the suspect took his own life,” Ayub said.

These high-capacity magazines are illegal to buy or possess in California, however, police said they are easily obtained in neighboring states. Long also did not have a permit to carry a concealed weapon.

During the shooting, police received conflicting information from the frightened witnesses, as well as different descriptions of the shooter, making it difficult to verify how many gunman were involved. However, Ayub said this was due to the chaos of the situation.

“As you can imagine, this was a terrifying experience for everyone who was there,” said Ayub. “When Sgt. Helus and the CHP officer approached the Borderline, more than 100 people were fleeing from the scene, some of them jumping through windows to escape.”

Among the 13 people that Long shot with his handgun (aside from himself), only one survived. As officers combed through the building afterward, they found more than a dozen people hiding in the attic and other locations.

The FBI assisted local law enforcement in collecting evidence from the scene, however, it will “take a considerable amount of time” to come up with a detailed timeline of the incident, said Ayub.

Authorities have still been unable to identify a motive in the shooting.

Thus far, officers have conducted hundreds of interviews, gathered body camera and surveillance footage, and collected “digital media” and other evidence from the scene and Long’s home, which has been sent to the FBI’s crime lab in Quantico, Virginia for analysis.

Full-body X-rays and autopsies have also been completed for all of the victims, said Christopher Young, Ventura County’s chief medical examiner.

“Questions have been raised about the severity of the injuries to the victims and if any victims could have survived if a rescue had occurred sooner,” said Young at the conference. “All of the victims died rapidly as a result of one or more gunshot wounds. The victims sustained injuries to vital areas. Many of the gunshot wounds were from close proximity, and there was no chance of survival.”

There was also no evidence that any of the victims were hit by shots fired from the law enforcement officers.

Long died from a self-inflicted single gunshot wound to the head.

Long and his mother told officers that they had a dispute about finances, which caused Long to punch several holes in the walls of the house.

At that time, deputies and a county mental health crisis team determined that Long did not meet the criteria for a mental health retainer. He was given resources for job placement and anger management.