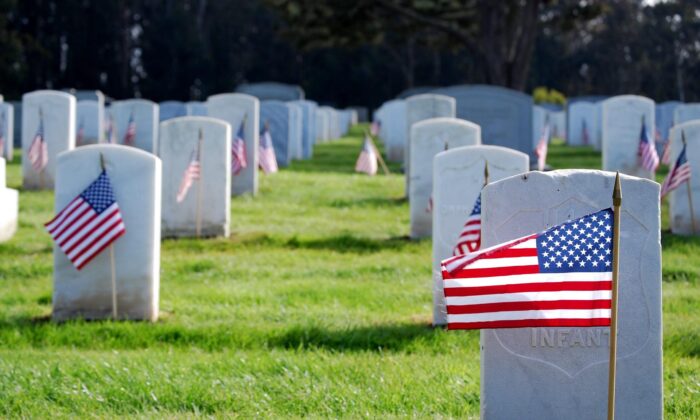 Four days a year a special American flag flew from a tall loblolly pine in my family’s front yard.

Every Memorial Day, Flag Day, Independence Day and every Veterans Day, my father would get up early then wake me, my sisters, and younger brother.

We would traipse into the front yard, yawning in Houston’s early morning humidity, in summer standing barefoot on St. Augustine grass, on Veterans Day wearing shoes in November’s cooler weather.

Then Dad would tie the flag to the rope, one of us would give the rope a pull, and the huge wall of red, white, and blue cloth would rise and billow as it rose, the only sound a pulley 35 feet up the pine creaking with each tug.

Hands covered hearts and we’d salute. Two minutes later, we kids would head back to bed. Dad might get a cup of coffee then oil the lawn mower. By 10 o’clock the mower and I would be cutting grass below the flag.

I said the flag was special. The flag had 49 stars, which made it an oddity of sorts, but the fact it had draped my Grandfather Bay’s casket made it a particularly significant treasure.

My grandfather died in San Antonio in 1960 and was buried at Fort Sam Houston a National Guard colonel, a veteran of two world wars and the on and off “Mexican border campaign” that ran from 1910 to 1916.

As an enlisted soldier in Company G, the Engineer Regiment, he participated in that border operation circa 1910 to 1911. I must have been 6 or 7 when my grandfather told me he saw a lot of Texas and Mexican desert, but he never saw Pancho Villa.

I didn’t realize it at the time, but my father’s flag-raising pageants were my first taste of veterans memorials. Our short front-yard ceremony was a very local Arlington.

We were also remembering the survivors. According to Dad, Grandfather Bay’s greatest sadness was the loss of half of his artillery regiment on the island of Java, when the 2nd Battalion/131st Field Artillery (Texas National Guard) was captured by the Japanese.

The 2/131st was the largest U.S. ground combat unit in the short-lived and ill-fated Dutch East Indies campaign. My grandfather and the 1st Battalion were still in the U.S. when the 2/131st was captured.

The men of “The Lost Battalion” spent the entire war suffering in Japanese prisoner of war camps. A few of the men worked on the bridge over the River Kwai. As I was growing up, I met a number of these POWs, most of them in veterans hospitals I’d visit with my Dad when we were out in West Texas. They came from small Texas towns, in the Panhandle or near Abilene. Though they were only four or five years older than my father, the men in the VA beds looked like… I told my father they looked like old people, like grandparents.

Dad said—calmly and carefully and not as harsh as I express it now—that I was seeing the physical effect of starvation, disease and abuse these men had suffered in the POW camps. The war’s over but the damage is lifelong.

The flag ceremonies beneath the pine tree definitely remembered these soldiers.

Memorial Day is devoted to the men and women who died in military service for America. But Dad’s flag ceremonies always honored all veterans.

For Memorial Day 2022 I find myself thinking about those 13 Americans who died in the 2021 Biden administration Afghanistan debacle. I honor their service and sacrifice.

However, thoughtful Americans know failing to evacuate all American citizens and the Afghan interpreters we promised to protect is a huge moral and historical stain that also seeds long-term national security risks.