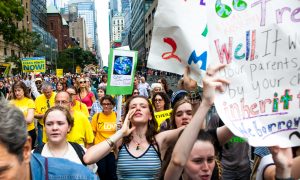 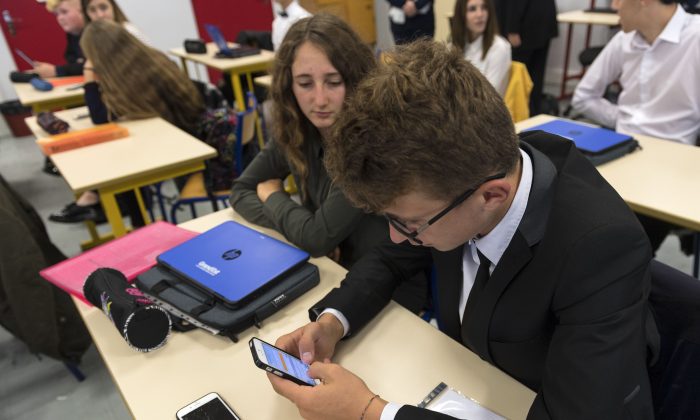 In this photograph taken on Sept. 26, 2017, high school students use smartphones and tablet computers at the vocational school in Bischwiller, eastern France. Since the beginning of the school year in eastern France some 31,000 high school pupils have replaced their traditional textbooks by computers and tablets, a move popular with students but opinion is divided among teachers and parents. PATRICK HERTZOG/AFP/Getty Images
Viewpoints

The last week of August was different for me this year. The college students are back in class, but I’ve stayed home. I retired from teaching in May. As I look back fondly on the years when I had the privilege of working with our country’s youth, I’d like to share a few observations and reflections.

Do I feel like there’s a generation gap between my generation—the baby boomers—and today’s college students (currently, but hopefully not permanently dubbed Generation Z)? There are so many nuances to that question, but painting with the broadest of brush strokes, let me say, “Differences, yes; a gap, I think not.”

From my perspective as a classroom teacher, I’ve noticed two trends that concern me. The first trend has been apparent for a number of decades now—the decline in writing skills. The traditional three R’s—reading, ‘riting, and ‘rithmetic—are of just as much fundamental importance as they always have been. Sadly, though, millions of Americans have been passing through our educational system with those basic skills remaining underdeveloped.

Writing, in my humble opinion, is the supreme intellectual skill. Good writing is evidence that a person has the ability to develop, organize, and clarify thoughts. Mature writing equals mature thinking. And the only way to achieve such competence is to practice, practice, practice. Today’s primary and especially secondary school pupils don’t get enough practice for a variety of reasons:

1) Too many educators aren’t willing to spend many after-school hours each week grading writing assignments, and so their pupils don’t get enough practice writing.

2) Many teachers are more concerned about the self-esteem of pupils (the “participation trophy” syndrome) than about the mastery of key intellectual skills.

3) Many teachers use time that should be devoted to developing basic intellectual skills preaching and indoctrinating young people into various progressive causes. The most egregious example of this is the insidious, invidious propaganda that fossil fuels are a sinful indulgence dooming us to planetary climatic disaster—an abuse of children that I have written about before.

The long-term consequences of neglecting to develop the writing skill in our schools are of existential magnitude. God help us if future generations of Americans lose the capacity to express or comprehend well-organized, clear, coherent thoughts. Can a people remain free if their discussion of vital issues is confined to sound bites and emotional tweets?

The other trend that I’ve noticed is more recent. The listening skill is decaying—not in all students, but in a sizable minority. Lessons that I used to be able to impart in a lecture a decade ago have proved more elusive in the last couple years. Students would respectfully listen to me, but my explanations didn’t stick.

The problem is that many of today’s young people have become so habituated to digital devices that they are forgetting how to listen to a speaker and process thoughts about what they hear. In my classroom, I compensated for my students’ poor listening skills by resorting to a practice that I thought I would never employ in a classroom: using PowerPoint presentations.

My recommendation for parents? No, don’t ban devices! We live in an increasingly digital world, and leaving children less than adept in their usage isn’t an option. Besides that, many parents are going to need their kids’ help figuring out how to work a multitude of digital gizmos. But parents can help develop the listening faculty by having their children listen to lectures, sermons, audio versions of books, college courses, and so on.

Balance in the use of devices—not total absorption on the one hand nor total abstinence on the other—is what is needed.

In terms of an actual generation gap, that seems like an overstatement to me. Although I’m no sociologist, I suspect that the notion of a “generation gap” is a product of modernity. Up until the last few centuries, social structures in the Old World were largely stagnant. Born into grinding poverty, the younger generation had little choice but to eke out a subsistence living much as their parents did. But in the past two or three centuries, especially here in the United States, unprecedented liberty, combined with rapid technological and economic progress, have triggered all sorts of social upheavals.

I first became aware of the concept of a “generation gap” during the Vietnam War. The counterculture movement within the baby boomer generation radically rejected the norms that our parents’ generation held dear. In discussions with fellow boomers, we all agree that we were amazingly lucky or blessed to be born when we were. Our parents had gone through severely trying times—first, the Great Depression, and then the massive conflict of World War II.

We, by contrast, grew up taking peace and prosperity for granted.

During the Vietnam War, many boomers reacted like spoiled children to the prospect of letting go of their comfortable, relatively easy lifestyles. “Hell, no, we won’t go” and “Make love, not war” became signature slogans for many boomers. However, I wouldn’t call that a generation gap, because huge numbers of boomers didn’t join the counterculture or reject our parents’ values. The gap was not between ages, but between conflicting values and ideologies.

I see the same dynamic today. I never felt a hint of a generation gap with my students, despite a half-century difference in age. People are people. Treat others with respect and kindness, and they will treat you the same. But there is a noticeable difference today compared to 50 years ago—again, not age-based, but value-based. Today’s society seems darker.

Exhibit A: The all-too-common phenomenon of spiritually starved mass murderers going on random rampages. While this scourge isn’t anywhere near the scale of deaths from suicide, automobile accidents, medical errors, and so forth, the sheer nihilism and pointlessness of mass murders indicates that something fundamental has gone severely awry.

What any society needs is to find ways for the different generations to accommodate each other and build upon the strengths of each. Asian cultures are known for the respect and deference customarily paid to elders, whose wisdom and experience are highly valued. In the United States, where we have exalted the trope of rebellious youth, it would be helpful for youth to recognize that they could learn valuable lessons and avoid painful pitfalls if they availed themselves of their elders’ wisdom. And the older generations should welcome youth’s energy, creativity, and willingness to experiment.

Just as balance proves helpful in our individual lives (see above: addiction to devices) so it is for society at large. Maintaining the tried and true while remaining open to the fresh and new can produce a powerful fusion of the best of young and old. Blending tradition with innovation can be a transgenerational formula for a vibrant yet stable society.

Every human generation will be confronted by challenges, but by working together, we can look forward with optimism to meaningful progress for all generations.