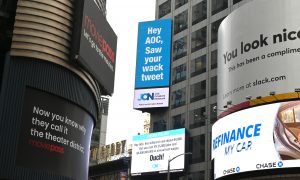 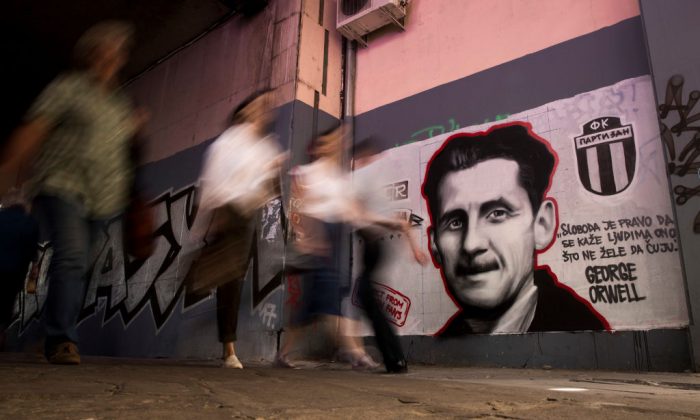 People walk past a mural depicting British novelist George Orwell with the reading "Freedom is the right to tell people what they do not want to hear," in Belgrade on May 8, 2018. (OLIVER BUNIC/AFP/Getty Images)
Viewpoints

‘Thoughtcrime’ Is Becoming a Reality

In several Western countries, people are receiving visits from the police to question them about their political views, and some have been arrested.

Cases in the UK and New Zealand have involved people who made comments against mass migration and Islamism. In a May 4 viral video posted on Facebook, a New Zealand man is questioned by police for his alleged posts about the mosque shooting in Christchurch.

Of course, the real issue isn’t about religious “intolerance.” It’s publicly accepted for people, including public leaders, to openly condemn religions such as Christianity. This is very specifically a political issue, related to state policy on mass migration, which is often heavily from Muslim countries.

Condemning state policies has become synonymous with a double standard on “intolerance,” which is punishable by the state. And by latching their policies to social issues, political parties have found a way to silence people who are criticizing their policies, by using the powers of the state for harassment and intimidation.

Even in the United States, similar practices are now in place, only they’re being enforced by large corporations. Chase Bank is accused of canceling the accounts of some customers who have “right-wing” views; Twitter and Facebook are accused of censoring conservatives; and Google is accused of firing employees for questioning the company culture of “political correctness.”

British writer George Orwell warned about such systems with his depiction of a fictional “thought police” in his book “Nineteen Eighty-Four.” He envisioned this secret police force as being tasked with finding “thought criminals” and punishing them for “thoughtcrime.”

These “thoughtcrimes,” as Orwell imagined, referred to illegal thoughts, including unspoken beliefs or negative views toward the fictional ruling party under English Socialism (Ingsoc).

The ideal good citizen of this system, Orwell said, “is expected to have no private emotions and no respites from enthusiasm. He is supposed to live in a continuous frenzy of hatred of foreign enemies and internal traitors, triumph over victories, and self-abasement before the power and wisdom of the Party.”

Of course, even in the time when Orwell published the book in 1949, examples of regimes like this had been seen under Hitler’s National Socialist German Workers’ Party, Stalin’s Communist Party of the Soviet Union, and Mao’s Chinese Communist Party. All three regimes had their own forms of “thoughtcrime,” and people risked imprisonment or death for opposing the ruling regimes.

The deeper nature of the socialist idea is in the struggle, and much like Orwell’s depiction of a populace living under his fictional Ingsoc regime, people are expected to hold a “continuous frenzy of hatred.” The systems rely on the state identifying a “privileged” group, which is framed as taking advantage of the “oppressed,” and anyone who says otherwise is deemed guilty of ideological treason, for aligning with the “privileged.”

As Orwell imagined, people would go through a series of mental gymnastics to avoid committing “thoughtcrimes.” This included acts such as “doublethink,” in which Party members simultaneously held two contradictory viewpoints. In today’s world, we’ve seen this in many cases; the leftist policy that any criticism of Islamism is “religious intolerance,” but criticizing Christianity is somehow fine, is among the many examples.

Yet to understand the deeper logic behind this modern “doublethink,” we need to understand the root cause of these wild concepts. Socialists hold that their ideas are Utopian—the ultimate goal of “progress” toward their envisioned state—and anything that opposes that “progress” is guilty of all the things they seek to destroy.

Under Mao Zedong, for example, people who opposed his 1967 theory of “political correctness”—which was used to guard his destruction of Chinese culture during the Cultural Revolution—could be labeled as a “counter-revolutionary” and be killed by the regime.

In the United States, the idea that anyone who opposes socialist goals should be attacked by any means comes from the Marxist Frankfurt School’s theory of “repressive tolerance.” The idea, from Herbert Marcuse’s “A Critique of Pure Tolerance” in 1965, held that only things that support the socialist cause should be tolerated, and anyone who opposes it should be met with intolerance.

It introduced a warped concept of “tolerance” that tolerates only its own views.

The result of these policies, as Orwell imagined, was a state in which people censor themselves—not just in public speech, but even in their own minds. He referred to this as “crimestop,” which he described as “the faculty of stopping short, as though by instinct, at the threshold of any dangerous thought.”

He described this self-censorship as a form of “protective stupidity” that supports the totalitarian regime, even at the defiance of logic. Orwell called this concept “blackwhite,” which had two meanings: “Applied to an opponent, it means the habit of impudently claiming that black is white, in contradiction of the plain facts. Applied to a Party member, it means a loyal willingness to say that black is white when Party discipline demands this.”

What we’re witnessing is the same theory of thoughtcrime that Orwell envisioned, with a similar thought police enforcement branch and the same doublethink, crimestop, and blackwhite tools to justify it.