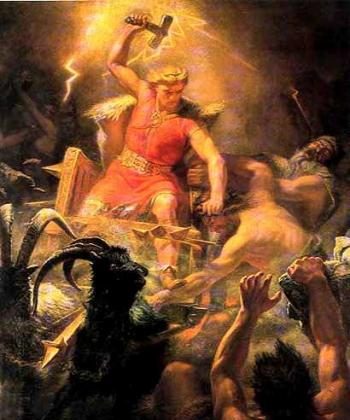 The Norse god Thor, the god of lightning, is depicted in this 1872 painting by Mårten Eskil Winge in a battle against the giants. (Image courtesy of Wilson's Almanac)
Europe

In Norse mythology, one of the most well known figures is Thor—typically represented with flowing red hair, wielding his mighty hammer Mjolnir. Thor means “thunder,” though as a god he is more than a lord of storms—he is also a protector from evil, and the god of farmers and agriculture, as well as of free men. And today we have his name with us once a week: “Thursday” comes from “Thor’s day.”

Thor is the son of Odin, the highest god in Norse mythology, and Fyorgyn, the goddess of earth, and is legendary for his strength. Odin is a god of battle, the father of the slain, and was worshipped by Vikings and warriors. Thor is simple to Odin’s complex nature—Thor is honest and straightforward, righteous, but with a furious temper. Many of those fleeing the battle-ridden lands of the Vikings escaped to Iceland, and worshipped Thor, preferring his attributes to the apparent blood thirst of Odin and his followers.

In Norse cosmology, the two major forces in the world are the gods, on the side of the good, and the frost giants, representing evil.

The frost giants and gods are in constant struggle, leading up to the time of Ragnarok, or the end of days—a time when the gods and frost giants will do battle, and the gods are destined to lose. However, they maintain their struggle to fight as best they can—indeed, a death in battle is the most glorious honor. And beyond Ragnarok is a further mysterious legend that though the gods will lose the battle, it will lead to the renewal of the universe, and in the end all will be well.

According to the Norse creation myth, Odin and his brothers created the first humans out of trees, named Ask and Embla, which may be where the tree names ash and elm come from. Trees play an important role in Norse belief, not just as the origins of man. A gigantic tree named Yggdrasil, or the World Tree, is thought to be holding aloft all the different worlds in the Norse universe, including Midgard, the home of man, and Asgard, the realm of the gods.

Thor often battles with the frost giants, his hammer Mjolnir their scourge. Mjolnir, which means “lightning,” has various powers, including being imbued with the power of lightning and never missing its mark, all the while returning to Thor’s hand after he launches it. Thor must wear iron gauntlets to protect himself from the power of the hammer.

His cart is drawn by two goats, which he can kill and eat for food, then revive them by laying his hammer upon their hides, as long as all their bones are unharmed. Thus, Mjolnir has both the power to destroy and to create.

His hammer is not his only magical aid, however, for Thor also wears a belt that doubles his strength.

Loki, the trickster god who later would betray the gods for the frost giants, accompanied Thor in his adventures, for it is said they “both enjoyed each other’s company.” However, the cunning god Loki would at times bring trouble upon Thor, including a time where he was led to the land of the frost giants, Jotunheim, without his hammer or his armor.

Thor’s destiny lies in a battle with Jormungand, a terrible serpent that was fathered by Loki and the frost giantess Angrboda, during Ragnarok. It was said that in their battle Thor would slay the beast by crushing its head with his hammer, but would fall back nine steps and succumb to the drowning venom from Jormungand’s maw.

After Scandinavia was thoroughly Christianized, the popularity and worship of the old Norse gods fell away. During the period of conversion, however, some believers would wear a symbol of Mjolnir, Thor’s hammer, that resembled a cross, in defiance of the Christian missionaries.

Today there is a Germanic Neopaganism that has arisen, which has brought back the old gods, though it omits some of the original beliefs, such as sacrifice. Otherwise, Thor can be found in art and popular culture, notably Wagner’s Ring cycle (where he is known by his German name, Donner) and comic books.