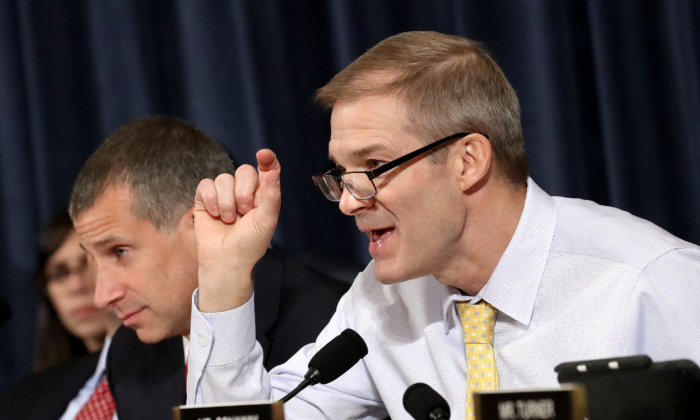 Rep. Bennie Thompson (D-Miss.), chairman of the House Select Committee to Investigate the January 6 Attack on the United States Capitol, said through a spokesman Monday that a response by Rep. Jim Jordan to his panel’s request the Ohio Republican appear before the panel failed to address the issues at hand.

Jordan in a letter made public late Sunday rejected the invitation. A spokesman for the committee told The Epoch Times the Ohio Republican’s response “fails to address the principal bases for the Select Committee’s request for a meeting, including that he worked directly with President Trump and the Trump legal team to attempt to overturn the lawful results of the 2020 presidential election.

“Mr. Jordan has admitted that he spoke directly to President Trump on January 6th and is thus a material witness. Mr. Jordan’s letter to the committee fails to address these facts. Mr. Jordan has previously said that he would cooperate with the committee’s investigation, but it now appears that the Trump team has persuaded him to try to hide the facts and circumstances of January 6th. The Select Committee will respond to this letter in more detail in the coming days and will consider appropriate next steps.”

Jordan described the panel’s invitation as “unprecedented and inappropriate.” In a searing four-page, single-spaced letter to Thompson, Jordan said the panel’s request that he answer questions about his discussions on and before Jan. 6 with President Donald Trump and several of his advisors violates congressional prerogatives.

“It amounts to an unprecedented and inappropriate demand to examine the basis for a colleague’s decision on a particular matter pending before the House of Representatives. This request is far outside the bounds of any legitimate inquiry, violates core Constitutional principles, and would serve to further erode legislative norms,” Jordan told Thompson.

Jordan, who is the Ranking Republican on the House Judiciary Committee, was reacting to a lengthy list of requests in a Dec. 22 letter from Thompson, who said “we understand that you had at least one and possibly multiple communications with President Trump on January 6th. We would like to discuss each such communication with you in detail.

“And we also wish to inquire about any communications you had on January 5th or 6th with those in the Willard War Room, the Trump legal team, White House personnel or others involved in organizing or planning the actions and strategies for January 6th.”

Thompson also noted that “the events on the day of January 6th are not our only focus. We also must learn about the activities that led to the attack on January 6th. Public reporting suggests that you may also have information about meetings with White House officials and the then-President in November and December 2020, and early-January 2021, about strategies for overturning the results of the 2020 election.”

But Jordan responded Sunday by pointing out that Thompson’s request amounted to an unconstitutional attempt to undermine an elected representative’s confidential decision-making process about an issue before Congress.

“At the time of the security breach of the Capitol, I was present in the House chamber performing my official duties pursuant to the U.S. Constitution and federal law. The other topics referenced in your letter likewise relate to the performance of official duties,” Jordan told Thompson.

“Your attempt to pry into the deliberative process informing a Member about legislative matters before the House is an outrageous abuse of the Select Committee’s authority. This unprecedented action serves no legitimate legislative purpose and would set a dangerous precedent for future Congresses,” Jordan continued.

Thompson’s panel has issued subpoenas for former Trump adviser Stephen Bannon and former White House Chief of Staff Mark Meadows. The panel has also sought to question Fox News opinion host Sean Hannity and Rep. Scott Perry (R-Pa.), who declined almost immediately upon being asked. The panel has not subpoenaed or requested testimony from any Democrats.

“It is telling that the Select Committee has chosen only to target Republican Members with demands for testimony about January 6. Unlike many senior Democrats, I have been consistent in denouncing political violence and supporting law enforcement personnel—whether the violence occurred on Jan. 6 at the Capitol or in the summer of 2020 in cities across the country,” Jordan told Thompson in his letter.

“I am aware of no effort by the Select Committee to solicit testimony from Speaker Pelosi, House Administration Chair Zoe Lofgren, or any other Democrat Members with responsibility for or oversight of the security posture at the Capitol complex on January 6. This double standard confirms our suspicion that Democrats are using the Select Committee as a partisan cudgel against their political adversaries and not to advance any legitimate legislative purpose,” Jordan said.

Jordan was originally slated to be a member of the Thompson committee, along with House Republican Study Committee Chairman Rep. Jim Banks (R-Ind.), but Speaker of the House Nancy Pelosi (D-Calif.) refused to allow either congressman to participate.

As a result, House Minority Leader Kevin McCarthy (R-Calif.) withdrew all five of his GOP nominees in protest of Pelosi’s action. Pelosi then appointed Rep. Liz Cheney (R-Wyo.) and Rep. Adam Kinzinger (R-Ill.) to serve on the January 6 panel. Cheney and Kinzinger had voted to impeach Trump following the Jan. 6 breach of the Capitol.