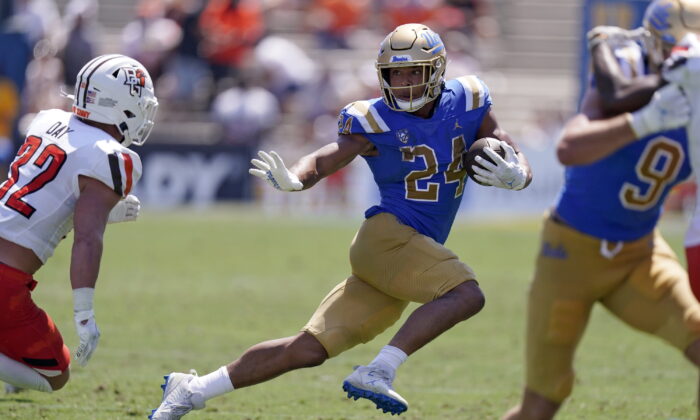 PASADENA, Calif.—Dorian Thompson-Robinson accounted for 385 yards of total offense and four scores, Zach Charbonnet ran for 111 yards and a touchdown, and UCLA rallied for a 45–17 victory over Bowling Green on Sept. 3 in the season opener for both teams.

The Bruins trailed 17–7 early in the second quarter before scoring 38 straight points to win their opener for the second straight year.

The fifth-year senior supplied an early highlight with a career-long 68-yard TD run during the first quarter to tie the game at seven.

Bowling Green brought a nickel blitz on third-and-3, but the fifth-year senior escaped pressure from Davon Ferguson in the backfield, scrambled right, went down the sideline and then cut across the field, including escaping another diving tackle attempt from a Falcons defender at the BG 34, before going into the end zone.

The Bruins rushed for 264 yards, improving to 16–4 when that has happened since Chip Kelly became coach in 2018.

UCLA scored 17 straight points in the second quarter to take a 24–17 lead at halftime. Keegan Jones supplied the go-ahead score when he caught a screen pass from Thompson-Robinson and went 52 yards up the left sideline.

Not A Fun Homecoming

Bowling Green quarterback Matt McDonald, who grew up in Newport Beach, was 17 of 34 for 125 yards. He did give the Falcons a fleeting 17–7 advantage early in the second quarter with a 22-yard touchdown pass to tight end Christian Sims.

Bowling Green got its first 10 points courtesy of its special teams coming up with big plays. After UCLA went three-and-out on its opening drive, Falcons’ running back PaSean Wimberly blocked Nicholas Barr-Mira’s punt at the UCLA 11.

Charles Rosser picked up the loose ball and returned it for a touchdown to give BG a 7–0 advantage 74 seconds into the game.

It was the first time since 2014 the Falcons have returned a blocked punt for a touchdown,

Later in the first quarter, Patrick Day recovered a muffed punt by UCLA’s Jake Bobo at the 11. Four plays later, Mason Lawler made a 24-yard field goal to put the Falcons up 10–7.

Another factor for the low crowd was students don’t report to UCLA’s campus until later this month.

Bowling Green: The Falcons were hoping to upset a Power Five team on the road for the second straight year, but were held to 37 yards rushing and averaged only 2.7 yards per offensive play.

UCLA: Kelly will not be pleased with the Bruins’ special teams play. Barr-Mira was 1 of 3 on field goals and missed a chip-shot attempt in the second half.