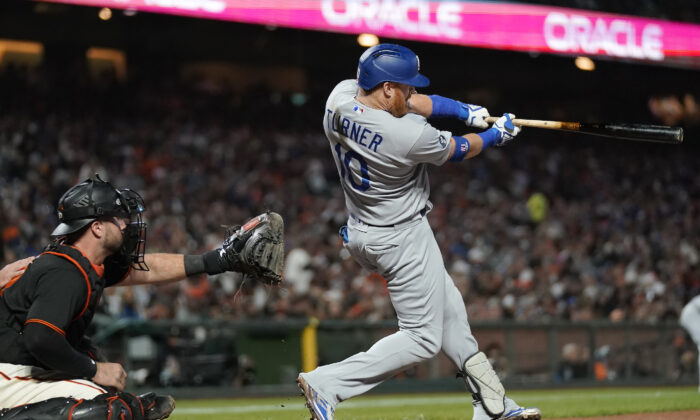 SAN FRANCISCO—Freddie Freeman is a 100-game winner for the first time, and he wants to pile on many more before these dominant Dodgers are done.

Trayce Thompson hit a two-run homer to back Julio Urías’ 17th win, and NL West champion Los Angeles beat up on the San Francisco Giants again with a 7–2 victory Sept. 17 to notch the 10th 100-win season in franchise history and fourth in six years.

“I think this is the first time I’ve ever done that—pretty cool,” said Freeman, who joined the Dodgers from the reigning World Series champion Braves on a $162 million, six-year deal this season. “It just means we’ve got a really good team and we’ve still got some more wins to go. …It is special, when you come to the field expecting to win every single night and you have a really good chance to win every single night. With our pitching and the way our offense is going lately, it’s a pretty good feeling.”

Justin Turner hit a pair of RBI singles among his three hits a day after reaching a career-best 35 doubles for the season.

“Every team goes through adversities but to have a consistent level of play to win 100 games at this point is quite the accomplishment, so there’s a lot of people that deserve a lot of credit,” Roberts said. “It’s something that we don’t take for granted.”

Urías (17–7) struck out eight with one walk over six innings and improved to 4–1 against San Francisco this season. He allowed two runs on five hits a day after the Dodgers shut down the Giants 5-0 on Friday night.

Urías might still have enough starts to reach 20 wins again this season, though he insists “whatever the team asks, my mentality is positive.”

Thompson connected for his 11th homer against Sean Hjelle, then the Dodgers hit five straight singles off Hjelle (0–2) to start the third inning before Thompson walked.

Gavin Lux returned to the Los Angeles lineup after being sidelined since Sept. 1 by back discomfort and went 0 for 4 with two strikeouts.

Rain forecast for Sunday could threaten the series finale. The contingency plan would be to play on the clubs’ mutual off day Sept. 26.

“I think everyone’s hoping whatever it takes to get it in so we don’t have to come back,” Roberts said.

Fittingly, former Giants fan favorite and right fielder Hunter Pence arrived at the ballpark on a scooter as he was honored in a pregame ceremony on the field as the newest member of the team’s Wall of Fame, the 55th player to earn the recognition.

“This is where I belong,” Pence said. “I wasn’t the best player but I was all heart. Put your heart into it.”

Highlights of Pence’s nearly eight years and two World Series championships with the Giants were shown on the big video screen.

“If I had a lesson it would be, don’t be afraid to fail,” Pence told the crowd.

Dodgers: LHP David Price, nursing inflammation in the wrist of his pitching hand, threw a bullpen and is expected to face hitters sometime in the next week.

RHP Yency Almonte (right elbow tightness) pitched a simulated game and will begin a rehab assignment of at least two games with Triple-A Oklahoma City early in the week.

RHP Tony Gonsolin (right forearm strain) threw a bullpen Saturday and will pitch another Monday before progressing to face hitters soon. “It continues to get better,” Roberts said.

RHP Brusdar Graterol (inflamed pitching elbow) also threw Saturday and is scheduled to face live hitters Monday. If all goes well he could be activated later next week.

Giants: OF Austin Slater, recovering from a dislocated left pinkie, has been taking swings and could be activated Monday or Tuesday at Colorado.

LHP Carlos Rodón threw a bullpen and is on schedule to take his next turn after leaving his start Wednesday against Atlanta with a blister.

1B Brandon Belt has been back around the club in recent days as he rehabs from right knee surgery, and manager Gabe Kapler reports Belt is “in really good spirits.”

There’s still no decision on whether LHP Alex Wood will pitch again this season as he recovers from a shoulder impingement.

The Giants recalled OF Heliot Ramos and Hjelle from Triple-A Sacramento and optioned OF Willie Calhoun and RHP Luis Ortiz to Sacramento.

San Francisco counters with RHP Alex Cobb (6–6, 3.48) looking to win his fourth straight decision and back-to-back starts for the first time since May.