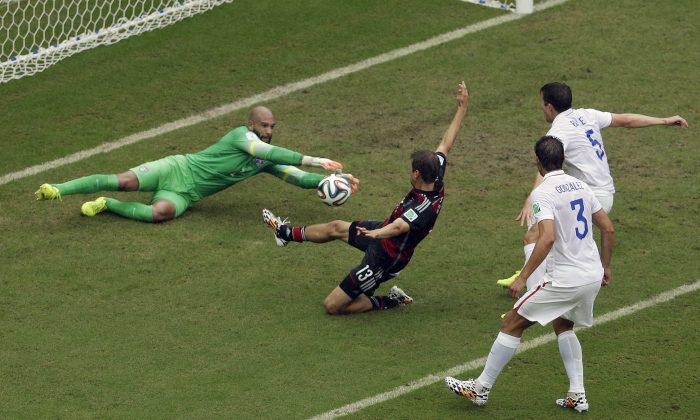 Thomas Mueller got the first goal against the United States on Thursday in a Group G World Cup match.

Mueller scored in the 55th minute, breaking open the 0-0 draw.

The U.S. has played defensively throughout the game, seemingly aiming for a draw. They may step up their aggressiveness now that they’re down 0-1.

The U.S. can advance with a loss, depending on the outcome of the Portugal-Ghana game.

See an Associated Press story from before the match below

Klinsmann says US wants win, not tie, vs Germany

MANAUS, Brazil—American players still were showering off the sweat from the steamy Amazon night when the first questions about a possible conspiracy were asked: Would the United States and Germany try to play to a tie Thursday that would guarantee World Cup advancement to both nations?

Following Portugal’s 95th-minute goal in a 2-2 draw Sunday, the Americans and Germany both have four points. Portugal and Ghana have one apiece.

A draw on Thursday in Recife would clinch first place in Group G for the Germans, who have a superior goal difference, and second for the U.S.

Portugal and Ghana, who play simultaneously in Brasilia, would be eliminated.

Add in that U.S coach Jurgen Klinsmann helped West Germany win its third World Cup title in 1990. And that he coached Germany to third place in the 2006 tournament. And that his top assistant then was Joachim Loew, who is now their homeland’s coach.

It’s more than enough to send the suspicious into overdrive.

“I don’t think that we are made for draws, really, except if it happens like tonight — two late goals, last seconds,” Klinsmann said. “I think both teams go into this game and they want to win the group.”

Portugal went ahead when Geoff Cameron’s wayward clearance gifted Nani a fifth-minute goal, but Jermaine Jones scored in the 64th and Clint Dempsey in the 81st to build a 2-1 lead for the U.S. Then Varela scored on a diving header off a cross from two-time world player of the year Cristiano Ronaldo with 30 seconds left in five minutes of stoppage time.

Now the U.S. may need a point against Germany to advance. The Americans could clinch with a loss, depending on the result of the Portugal-Ghana game.

Some thought back to the 1982 World Cup in Spain, where West Germany opened with a 2-1 loss to Algeria and beat Chile 4-1. Austria defeated Algeria 2-0, then defeated Chile 1-0 on June 24.

When West Germany and Austria played the following day at Gijon’s Estadio El Molinon, a German victory by one or two goals would ensure both teams advanced. Horst Hrubesch scored for the West Germans 10 minutes in, and players spent much of the rest of the evening passing to their teammates without threatening the opposing goal.

West Germany won 1-0 and reached the second round along with Austria, while Algeria was eliminated. The game became known as the “Nichtangriffspakt von Gijon (Nonaggression Pact of Gijon)” and “Schande von Gijon (Disgrace of Gijon).”

Klinsmann and Gulati talked about the 2009 World Cup qualifier against Costa Rica, when the U.S. had already clinched a World Cup berth and Jonathan Bornstein’s 95th-minute goal gave the Americans a 2-2 tie that knocked out the Ticos and sent Honduras to the tournament.

And there was last October’s game against Panama, a month after the U.S. had clinched. Graham Zusiand Aron Johannsson scored in stoppage time for a 3-2 win that knocked out the Panamanians and allowed Mexico to reach a playoff against New Zealand.

Klinsmann dismissed the notion he and Loew would have a conversation before the game.

“There’s no such call,” he said. “There’s no time right now to have friendship calls. It’s about business now.”

And Jones, who played three games for Germany in 2008 before switching allegiance, said playing for a tie could be dangerous.