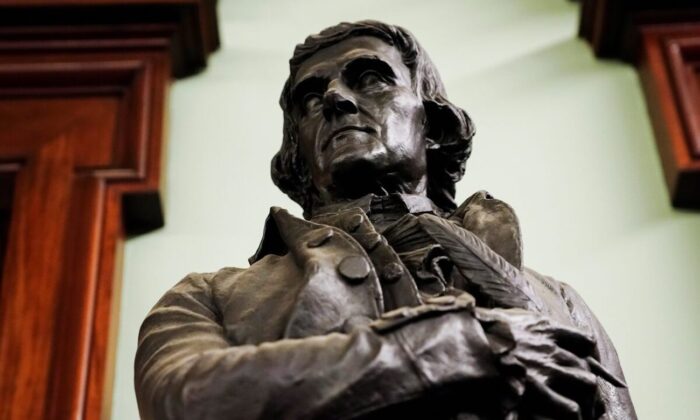 A statue of former U.S. President Thomas Jefferson is pictured in the council chambers in City Hall in the Manhattan borough of New York City, New York, Oct. 19, 2021. (Carlo Allegri/Reuters)
US News

The statue, which stands seven feet and weighs 884 pounds, was sculpted in 1833 and has been in the council chambers since 1915. It was given to the city hall in 1834 by Uriah Phillips Levy, a naval officer.

The New York City Public Design Commission voted unanimously on Oct. 18 to remove the statue before 2022.

Members of the council’s Black, Latin, and Asian Caucus publicly said they opposed its presence at city hall, and called to for a vote on the statue’s removal, citing Jefferson’s history as a slave owner.

“Jefferson embodied some of the most shameful parts of our country’s long and nuanced history,” Councilperson Adrienne Adams, co-chair of the council’s Black, Latino and Asian Caucus, told the commission at the time. “It is time for the city to turn the page and move forward.”

The same nine-member commission, whose members are appointed by Mayor Bill de Blasio, a Democrat, voted early Monday to move the statue to the New York Historical Society on a 10-year-loan. The statue will be displayed in the lobby gallery for six months before it is moved to the museum’s reading room.

The museum has plans to provide context to Jefferson’s “complicated legacy.”

The statue is a plaster replica of a bronze work by French artist Pierre-Jean David D’Angers, which remains on display in the U.S. Capitol Rotunda in Washington, D.C.

Jefferson is the third president of the United States. His picture appears on the two-dollar bill. He is also one of the faces on Mount Rushmore. A presidential biography published on the White House website calls him a “spokesman for democracy” and the “principal author” of the 1776 Declaration of Independence.

Keri Butler, executive director of the commission, initially tried to block media members from witnessing the removal of the statue, but later relented after members of the mayor’s office and City Council intervened, reported the New York Post.

“Removing a monument without a public conversation about why it’s happening is useless,” said Erin Thompson, a professor at John Jay College of Criminal Justice. “New Yorkers all need to talk about who we want to honor and why.”

Thompson, author of an upcoming book, “Smashing Statues: The Rise and Fall of America’s Public Monuments,” said that the statue’s removal could prompt some discussion on history.

“Moving this statue doesn’t mean New Yorkers will forget who Thomas Jefferson was—but some of them might learn from the controversy that the man who wrote ‘all men are created equal’ owned over 600 of his fellow humans,” Thompson said.