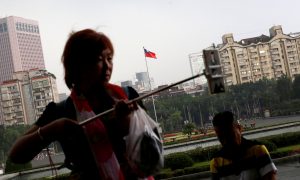 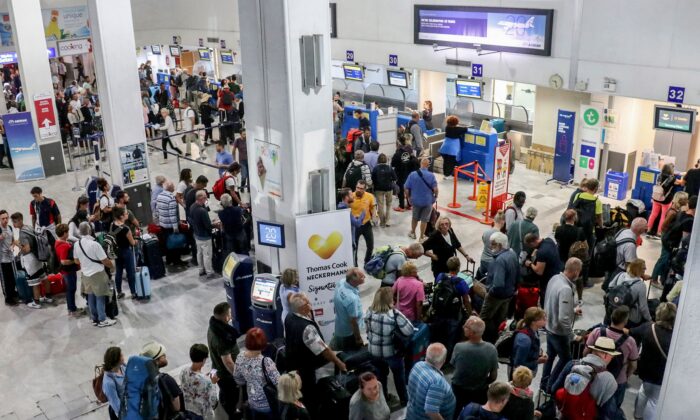 Tourists wait at a Thomas Cook company counter at Heraklion airport on the island of Crete on Sept. 23, 2019. (Costas Metaxakis/AFP/Getty Images)
Companies

When Thomas Cook Group Plc began dangerously hurtling toward collapse early last week, Transport Secretary Grant Shapps ordered up a contingency plan: Operation Matterhorn.
The effort aimed to safeguard the return of U.K. tourists should the company indeed go under. But the massive undertaking also betrayed the thinking that had taken root in the Brexit-hardened cabinet: that the company was already doomed, and that the state shouldn’t step in.

If senior management felt the same way about Thomas Cook’s prospects, at least they put on a brave face. Chief Executive Officer Peter Fankhauser had been due to address a major tourism congress in Cologne on Sept. 17, but the situation back in London was looking so dire that he dispatched the head of the tour operator’s German business to stand in for him.

“It’s a bumpy road that we have traveled in the past months,” Stefanie Berk told the audience.

For Fankhauser, Thomas Cook and the thousands of vacationers who had booked their travel through the storied tourism company, the ride was about to get more than just bumpy. By Sept. 22, talks to rescue the business had run into a dead end. As a result, Thomas Cook filed for compulsory liquidation in the early hours of Sept. 23 after a last-minute effort to raise additional funds failed, immediately canceling bookings, flights and package tours for U.K. customers.

This story is based on accounts of people familiar with the final negotiations, who asked not to be identified discussing confidential deliberations. Thomas Cook declined to comment.

While the company’s demise was years in the making, the final death spiral came in the space of just a few days. By the end of last week, Thomas Cook was confronted with a request for additional financing from a consortium of its lenders including Royal Bank of Scotland Group Plc and Lloyds Banking Group Plc that it couldn’t meet.

The banks wanted additional 200 million pounds on top of the 900 million pounds already agreed in August to kick off a debt-for-equity swap that would have wiped out shareholders. China’s Fosun Tourism Group, Thomas Cook’s largest shareholder, had pledged half of the money to bail out the company and take over the majority of the tour operator arm, but was unwilling to do more.

Faced with the demands, management appealed to the U.K. government, asking for a financial lifeline. The request was turned down almost immediately out of concern that Thomas Cook would come back again and again, asking for more. At no point was a full bailout of the company seriously contemplated, with the government instead viewing Thomas Cook’s business model as outdated.

U.K. Foreign Secretary Dominic Raab, speaking in an interview on the BBC on Sept. 22, said “we don’t systematically step in with the taxpayers’ money when businesses are going under unless there’s a good strategic national interest for doing so.”

Fankhauser had been forced to walk the delicate line between crisis and revival for years. With a balance sheet weighed down by a string of deals a decade ago, Thomas Cook had trouble keeping up with industry rivals to invest in hotels and other tourism assets, thereby remaining exposed to the thin margins of its tour operating business that was under attack from online travel agencies and low-cost airlines. The company had already required emergency financing in 2011, and its situation only worsened when hot summers across Europe kept many would-be vacationers at home in the U.K. and Scandinavia.

“Thomas Cook has faced a lot of competition, there are new low-cost entrants, they have a mountain of debt,” Deirdre Hutton the head of the U.K. Civil Aviation Authority, said on Bloomberg Television hours after the insolvency filing. “They’ve been operating on a brochure basis, whereas the world’s moved on to bar codes.”

Over the past weekend, Fankhauser, whose English is laced with the accent of his native Switzerland, made a last-ditch effort to rally creditors behind his latest rescue plan. In the financial district of London, teams gathered at the offices of Latham & Watkins, Thomas Cook’s legal adviser. Also in the room were representatives of the main company’s main lenders and creditors, as well as Fosun, which holds an 18% stake.

In July, Fosun and creditors pledged to pump 750 million pounds into the company to avoid collapse. By late August, the required amount had ballooned to 900 million. When the Chinese conglomerate committed the additional funding—its 450 million pounds was matched by creditors—it made clear that this was the last line. Any additional amount required to keep Thomas Cook alive would have to come from other sources, such as the lending banks.

Now, with another bailout looming less than a month later, the travel company had exhausted Fosun’s appetite to commit more money. As the Chinese company saw it, the case was more complex than just making some more money available. Instead, Fosun saw Thomas Cook as a deep restructuring case that required commitments from different stakeholders, a complex negotiation task that failed to yield a result.

By Sunday afternoon, any hope of reaching a last-ditch deal had evaporated, and Thomas Cook’s board scheduled a meeting for 6 p.m. to weigh its options. Fankhauser was filmed by television crews emerging in the late afternoon from the service ramp of the law firm’s offices, avoiding questions about whether he’d reached a deal. Dressed in a suit without tie and pushing along a small suitcase, the stern-faced Swiss declined to reveal the next course of action.

The parties had balked at the size of a possible bailout, which gradually swelled, simultaneously increasing the uncertainty that any rescue would succeed. It’s an escalation that had bedeviled the company for months, with Thomas Cook finding itself in a vicious circle as customers grew concerned about its financial woes and chose to book their trips elsewhere.

The company reported a large decline in sales and earnings at the end of July and burned through cash in its last months. A month ago Thomas Cook had just 247 million pounds in cash, down from 484 million pounds the previous month and more than 1 billion pounds a year before that, according to analysts at Oddo Bhf in Paris.

Fankhauser displayed an air of defiance in a statement acknowledging the breakdown, saying that a deal had been largely agreed, but that “an additional facility requested in the last few days of negotiations presented a challenge that ultimately proved insurmountable.”

Hours earlier at its meeting, the board decided to implement the inevitable, applying for liquidation on Sept. 23 with the High Court in London. The request was granted at 2 a.m.

The reason the court picked the unusual time in the early hours of Monday: it’s the moment when there are typically the fewest aircraft in the air and the most held on the ground in the U.K., a fate that has now befallen the entire company’s operations after 178 years in business.