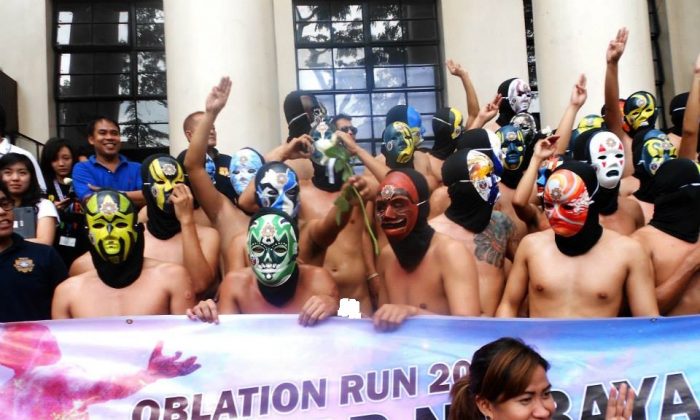 PHILIPPINES — It’s December again, most of us look forward for Christmas and New Year — shopping, gift giving and feasts here and there. But, as most Filipinos know about, December is that time of the year wherein most students patiently waits for Alpha Phi Omega’s (APO) annual oblation run at the University of the Philippines (UP) nationwide.

Watching the oblation run has become each Filipino college student’s highlight. Although it is only done at the University of the Philippines, students from other universities gather as they await for nude male APO members to run the most controversial event of the year. Oblation run, commonly known as the “Ritual Dance of the Brave”, portrays a statue of a naked man known as the “Oblation”, with its arms spread wide open, symbolizing freedom. Oblation became UP’s signature/symbol. Each year, the oblation run’s theme raises awareness to several social issues that need to be dealt with, but remains to be unheard of.  Because of its notoriety in the past, the oblation run garnered increasing attention from the media, making it one of the best ways to be noticed.

A month ago, super typhoon Haiyan/Yolanda brought great devastation to the Filipino community. Many families are  now homeless and in pain because most of them lost a loved one. The oblation run’s theme this year is all about the victims of Haiyan/Yolanda. The masks that were used by the oblation runners will be up for sale and the proceeds will go to the victims of the super typhoon.

According to APO member, Ron Tropia from Theta chapter, “This year’s theme is totally different from last year. Oblation run’s theme this year focuses on hope, as opposed to last year’s theme which focuses on students’ protests on budget cuts, high tuition fees and other student matters”. Tropia added “I was very passive about the issues concerning our country. It changed when I joined APO, and for me it’s very liberating because I got to participate in nation building in general. We’ve protested about national issues, hoping other people will heed our protests, but, as it turns out, I’m one of the people actually raising social awareness nationwide”. Another APO member, Bima Baje from Epsilon Phi, who is now based in New Jersey added, “Aside from becoming an essential part of the Filipino community’s voice, APO helped me survive.  After graduation, the members gave me a chance to prove my worth as a member and as an individual. Wherever I go, I always have APO’s foundation within me. Helping the victims of Haiyan/Yolanda, is just one way of showing that APO have come a long way from being a fraternity/sorority, to becoming a full blown service-oriented organization”.

Others have criticized the oblation run (and the organization itself) due to its explicit nature. But, as the years passed, it has become more meaningful, and its ambiguity has been unveiled because APO members have succeeded in delivering the issues first hand to the UP community, the Philippines government and to the public.

Let us all keep in mind that Haiyan/Yolanda victims are still greatly affected by the super typhoon. You can help by donating a few dollars through U.S. charities. Please check charity navigator to obtain a list.