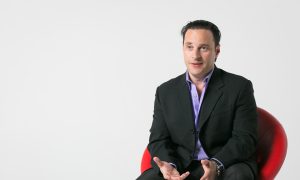 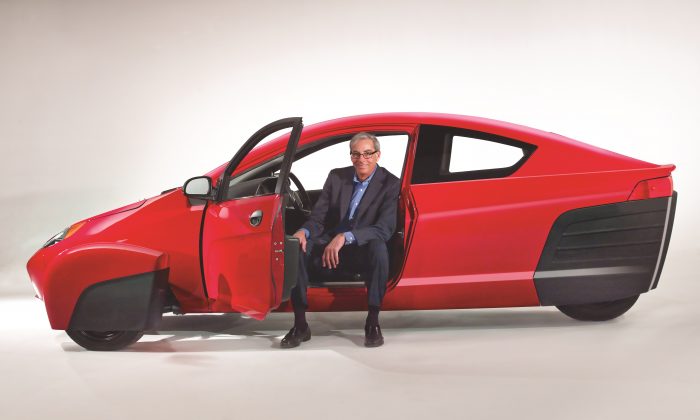 This Vehicle Is Changing the Driving Game

A car with three wheels, two seats, and a $6,800 starting price could hit the roads next year.

Elio Motors, a Phoenix-based startup, wants to revolutionize the American transportation industry—and it’s off to a good start: It has already received more than 53,000 reservations for its ingenious vehicle. Also nice: It was the first startup to go public through crowdfunding.

Founded by Paul Elio in 2008, Elio Motors invented a prototype for a three-wheel, two-seater vehicle. It is a highly fuel-efficient car that can get up to 84 miles per gallon, which is twice the mileage of a standard compact car. How does it do that? Slim design and a light weight.

It is a highly fuel-efficient car that can get up to 84 miles per gallon.

“Our product is compelling, and that is the part of the reason why people reserve. People also know that what we are doing is important. This project really needs to happen. We will be creating tens of thousands of new American jobs,” said Elio.

Elio graduated from General Motors Institute (now Kettering University) in 1996 with a degree in mechanical engineering. After graduation, he founded ESG Engineering, an automotive consultancy firm.

Elio’s dream to invent a new car began in 2008 when ESG started designing the three-wheeled vehicle now known as the Elio. He was motivated by rising vehicle prices, volatile fuel prices, and a struggling industry in general.

As an automotive engineer, his vision was to tap America’s know-how in design and manufacturing. Upon realizing the potential of the Elio, he created Elio Motors and started to look for funds for his dream.

It was not a good time, as the U.S. automotive industry was already in turmoil. His consulting company ESG, which had been backing the Elio project, started to struggle financially.

Elio could not find any funding for his project until 2012 when he met Stuart Lichter, a billionaire real-estate developer and founder of Industrial Realty Group.

Lichter bought some of the assets spun off from General Motors during its bankruptcy, including a plant in Louisiana. He leased the plant to Elio. He has also invested $20 million in debt and equity to support the project.

In total, Elio has raised $96 million including capital from Stuart Lichter and ESG Engineering, funds through crowdfunding, and deposits from potential customers.

Elio Motors is the first company to have its shares traded publicly through crowdfunding.

Out of the total amount raised, $17 million came through a Regulation A+ stock offering on the StartEngine crowdfunding platform in February 2016. Elio Motors (OTC: ELIO) is the first company to have its shares traded publicly through crowdfunding.

In March 2015, the Securities and Exchange Commission (SEC) finalized amendments to Regulation A under Title IV of the 2012 Jumpstart Our Business Startups (JOBS) Act, paving the way for private companies to raise up to $50 million from nonaccredited investors.

Elio Motors was one of the first companies to launch a formal stock offering utilizing Regulation A+, after receiving qualification from the SEC.

“Funding is often a significant roadblock for bringing big ideas to the market. Regulation A+ allows entrepreneurs a quicker and more efficient method for raising capital,” said Elio in a press release after the offering.

Since Elio Motors is now a publicly traded company, it has to disclose all company information in SEC filings.

After the offering, Elio shares jumped to $60, giving it a market valuation of $1.5 billion in two trading days.

“It is a luxury to be a private company, but the access to capital far outweighs that luxury. Now that we are a publicly traded company, we have many tools to raise the rest of the dollars. It has been absolutely the right call for us,” said Elio.

“On our Regulation A+ experience, the one thing I would do differently if I had to do over again is to get analyst coverage engaged during the process. Right now there is no one recommending our stock, and we are working to solve that problem,” said Elio.

Elio also launched an online reservation mechanism in January 2013, similar to Tesla’s pre-order system. The company has taken reservations from over 53,000 customers and has taken in $21 million in deposits so far.

The company has taken reservations from over 53,000 customers.

Elio calls the vehicle an “autocycle” because it blends the elements of an automobile and a motorcycle. It has one door, two seats behind each other similar to a motorcycle, and has three wheels—two in the front and one in the rear.

It is even classified as a motorcycle by the U.S. government. However, the vehicle has all the safety features of a car, like anti-lock brakes, three airbags, a reinforced roll-cage frame, and 50 percent larger crush zones than similar vehicles. Drivers won’t be required to wear helmets or have motorcycle licenses in most states.

The Elio has a three-cylinder, 0.9-liter engine, and a top speed of more than 100 miles per hour.

“Elio gets up to 84 mpg on the highway because of its unique design. Gas mileage is determined by how much wind resistance there is on a vehicle. Because Elio is half the width of a regular car, it gets twice the mileage,” the company says on its website.

That means about $1,500 a year in fuel savings for an average driver. “Bottom line, your Elio pays for itself … or more accurately, your local gas pump does,” claims the company.

It means saving billions of gallons of gas, and it cuts down on billions of pounds of CO2 emissions. “After five years, when we hit our sales targets, we can reduce the total U.S. gas consumption by nearly half a percent. That is an impressive number,” said Elio.

When we hit our sales targets, we can reduce the total U.S. gas consumption by nearly half a percent.
— Paul Elio, Elio Motors

The vehicle will be built at a former General Motors plant in Shreveport, Louisiana. “Elio is American-made, targeting utilization of 90 percent North American content,” said Elio.

Elio Motors will deliver a base model to customers, but it will also allow them to personalize the vehicle by choosing and paying for only the options they want and need.

The Elio base model will sell for $6,800, offered in a choice of seven colors: Rocket Silver, Sour Apple, Creamsicle, Red Hot, True Blue, Licorice, and Marshmallow.

The production of the Elio has been postponed several times in the past due to funding constraints. However, Mr. Elio’s grit and determination has kept this project alive since its inception in 2008.

The company is aiming to start production in 2017.

The company wants to start production in 2017. In order to do that, it needs to raise an additional $300 million in capital. Elio is hoping to raise capital through a combination of outside investment and a government loan called the Advanced Technology Vehicles Manufacturing (ATVM) loan.

“I am very excited about ATVM. I think we are a natural fit. But we do not totally rely on the government loan. We always maintain a completely private solution to our funding,” said Elio.

“Other startups that try to produce a vehicle will spend about $1 billion. We are spending $300 million. And that is a big part of the reason why we can do it without the government loan.”

For Elio, the startup cost is lower compared to other manufacturers thanks to the former GM production plant, which is up and running with its machinery and equipment.

“Acquiring that site was a huge win for us,” said Elio. “Another reason why we can do this with low cost is because there is no new technology on Elio. All the parts already exist, and that really helps to reduce the startup costs.”

With respect to competition, Elio thinks the vehicle is not easy to duplicate and it will take some time for competition to enter the autocycle segment. “It is incredibly difficult to start a new car company. And to get the global supply base engaged is the secret of our success,” said Elio.

There are people who don’t believe we landed on the moon, arguing that it was staged by Hollywood.
— Paul Elio, Elio Motors

Due to funding constraints and delays in the production timeline, the Elio project has generated some controversy and criticism.

“What we are doing is hard. However, we have way more support than skepticism. Skepticism is healthy depending on the level. There are people who don’t believe we landed on the moon, arguing that it was staged by Hollywood,” said Elio.

“Vast majority of skeptics are way more reasonable than that. And as we achieve each milestone, more and more people will believe in what we are doing.”