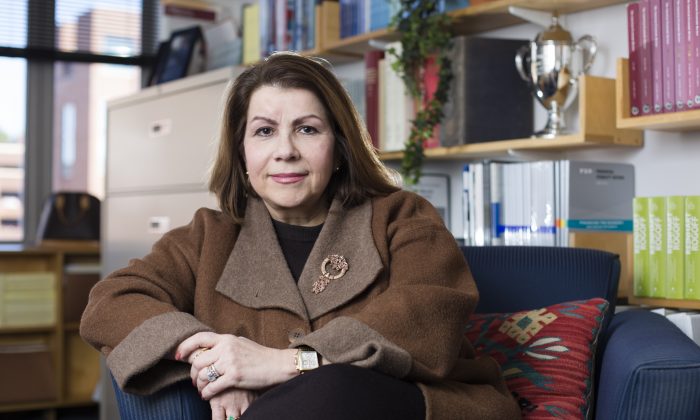 Carmen M. Reinhart, the Minos A. Zombanakis Professor of the international financial system at the Harvard Kennedy School and author of "This Time Is Different" in Cambridge, Massachusetts, on Oct. 19, 2015. (Samira Bouaou/Epoch Times)
China

Can an economist be a celebrity? Usually not.

There are a few exceptions and Carmen Reinhart is one. Certainly after her book “This Time Is Different,” came out in 2009.

“Carmen Reinhart and Ken Rogoff came as close to celebrity status as an economist can ever come,” writes professor Randall Wray.

Why the unusual attention? The answer is what they got right in the punchline of their book: Although contemporaries may say this time is different, financial crises follow historical patterns. Reinhart and her co-author Kenneth Rogoff analyze these patterns over 800 years and find when crisis hits it’s not much different from the last time around.

It’s not that all countries are the same, you don’t really get this nice little recipe.

Six years after the publication of the book, Carmen Reinhart, a professor of the international financial system at Harvard, sees the signs of crisis again.

Epoch Times spoke to her about why China is different and not different at the same time, about a lingering crisis in emerging markets, the International Monetary Fund, as well as higher U.S. interest rates.

Epoch Times: What kinds of scenarios do you see for China?

Prof. Reinhart: Even with a benign scenario, China’s economy is slowing but not imploding. Even without the drama a shift from investment to consumption may mean that a lot of the foreign direct investment projects in emerging markets they so aggressively pursued, especially in connection with boosting commodity supplies, are not a priority anymore.

Whatever happens in China has repercussions in the rest of the world. I think the most pronounced repercussions are not going to be in Europe, not so much in the United States, but in the emerging markets.

Epoch Times: In your book, you analyze the debt profile of countries to predict financial crises. How is the Chinese profile looking?

You as a government have a lot more leverage on that domestic resident that’s holding your debt.

It means there’s this whole layer of debt outside the banking sector that may also introduce an element of currency mismatch into the picture that we’re not capturing.

Absolutely. So you have essentially medium to smaller firms that are in the non-traded area that don’t have direct revenues and hard currency but that have acquired hard currency debt. Over the course of the last couple of years [the BIS] has been writing and trying to quantify this issue.

I think, in my view however, the bigger concerns about China are not external debt but internal debt.

Epoch Times: So is China different?

It’s like an illness. If 10 different people have the same illness they’re going to show some common symptoms. Obviously what form it takes depends on whether you’re 70 years old or 10. What your health is like and so on, but there are common symptoms.

China’s internal debts are to a large extent a great mystery. And this is not just to me, they’re a mystery at large. So what do we know and what don’t we know?

So if you look at for example, domestic credit, this is really the activity of banks. That’s something that’s not perfect, but they report data to the IMF, that data on domestic credit shows a surge in credit in the last decade.

A really big credit boom. If you look at the public sector debt, domestic debt you start getting more nebulous because domestic debt data is much harder to come by. Even federal government debt is hard to come by.

Technically those debts were not supposed to exist but we all know that the provinces through third parties and real estate operations were borrowing heavily in connection with the real estate boom and the infrastructure boom.

We are seeing, I think, by most indicators, more capital flight from China.

When things start slowing down and some of the projects start going sour and it’s clear that those projects are not going to be profitable then short term debt is a real problem. Even if they are willing to roll it over, they’re going to roll it over at a very high rate.