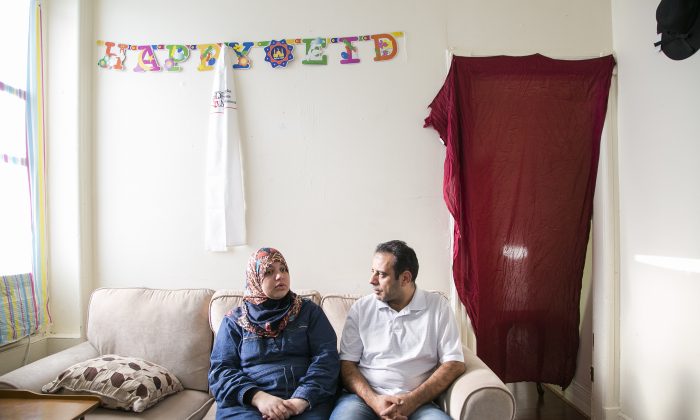 No time to pack or say goodbye, the Al Roustom family fled one of Syria's hardest hit cities, becoming among the lucky few to arrive in America
By Amelia Pang

JERSEY CITY, N.J.—There was a faint whistling sound; then, a deafening blast. The ground in Homs, Syria, quivered. Hussam Al Roustom saw his friend screeching to a halt in a vegetable truck. His friend yelled that he was heading to Jordan and could take his family. Without pause or preamble, Al Roustom decided that he and his family were leaving Syria in that vegetable truck.

Since the phone lines were down in Homs, Al Roustom’s friend could not alert him of the plan beforehand.

There was no time to pack or say goodbye to elderly mothers. In a moment’s notice, Al Roustom, his wife, and their two small children left their home for good in April 2013. Tears streamed down his wife’s face as it sunk in that she might never see her family or friends again.

As the vegetable truck trundled along, Al Roustom did not wonder if he had made the right decision that moment.  For two years, they had listened to the unending fusillade of bullets and roar of bombs. All they could afford to feed their children was hummus.

“Either I watch my children die in front of me,” Al Roustom said through a translator. “Or we flee and hope for a chance for a better life.”

Al Roustom left with only a vague hope that they might be able to stay in Jordan. Little did he know, his family would be a part of a select few Syrians invited to resettle in the United States.

After one month of suffering in a refugee camp without water or electricity, Al Roustom secretly got a job as a steel worker and they moved into an apartment in Irbid, Jordan.

Due to the high unemployment rate in Jordan, it was illegal for refugees to obtain work. Al Roustom tried his best to avoid authorities and hoped that their journey was over.

A year later, the police caught Al Roustom working. He and his family were sent to another refugee camp in the middle of a desert near Saudi Arabia.

Like the first camp, it had no water, electricity, or medicine. But this camp experienced severe sandstorms and drastic temperature shifts. His children caught stomach viruses.

Al Roustom considered returning to war-torn Syria. But the fact that the U.N. Refugee Agency had interviewed his family a few months ago gave him a sliver of hope.

The agency estimates there are currently 4.3 million Syrian refugees displaced outside of Syria while an additional 6.5 million people remain displaced inside the country.

Al Roustom and his family stayed in the desert camp for six months before they got some very surprising news.  They were given the green light to resettle in a New Jersey city in June.

Resettlement Process in US

Al Roustom and his family are among 2,153 Syrian refugees that have arrived in the United States since 2012, and the 20 who resettled in Jersey City (4 have settled in New York City).

Refugees, especially refugees from the Middle East, face thorough security and medical screenings by agencies such as the NSA and Homeland Security.

“It usually takes about a minimum of four years for a Syrian refugee to get approved to come,” said Mahmoud Mahmoud, a regional director of Church World Service.

Church World Service is one of nine resettlement agencies that works with the State Department to help refugees begin their new lives.

Within three weeks, Mahmoud found Al Roustom’s family an apartment and furnished it with donated furniture.

President Obama said he will accept at least 10,000 more displaced Syrians over the next year. But the resettlement agencies including the Church World Service said they have the resources lined up to resettle 100,000 Syrian refugees and ask that the government increase the cap.

For now, they are helping refugees one small batch at a time.

Church World Service currently has 22 Syrian refugees booked on flights to arrive throughout the next few weeks. An additional 71 refugees were just cleared and assigned to another U.S. resettlement agency.

These incoming refugees are likely a part of a small number of displaced Syrians who received expedited security clearance like Al Roustom’s family.

Al Roustom’s family didn’t have to wait four years for a security clearance because they were fleeing with sick children and escaping entirely ruined cities such as Homs. (Al Roustom’s son is autistic and his behavior turns violent if he isn’t properly medicated.)

Since August, six Syrian families have resettled in New Haven, Connecticut. All six families had children traveling with them, and all were from Homs.

A Syrian refugee family of six that resettled in Lancaster, Pennsylvania, in June had children with them as well.

But most displaced Syrians will have to wait several more years before finding homes.

Farris Albasir, a 51-year-old travel concierge on Staten Island, thought about sponsoring his family to come to the United States but feared the process would take too long.

His brother’s wife and three children are currently stuck in a refugee camp in Latakia, Syria. His brother managed to get smuggled into Germany, but it will take two to three years for his wife and children to get approved to join him there. That’s faster than trying to bring them to the States, but it’s still seems a long time to languish in a camp.

Albasir is growing desperate and is looking for ways to cut corners in the system.

He said he heard a rumor that it only takes two months to get approved to stay in India. He contemplated buying his family plane tickets to India.

“I feel bad. The situation in Syria is getting worse and worse,” Albasir said. “Since Russia got involved, there are more bullets in the sky.”

Earlier this year, a German website called Refugees Welcome began pairing refugees with citizens who were willing to share their homes. Although the website focused on housing refugees in Europe, more than 50 U.S. residents have signed up to offer their homes.

Gibran Malik, a music engineer, had been thinking of the issue of housing refugees long before the Syrian civil war. Malik purchased an apartment building in New Haven in 2007 to house refugees from Nepal, Thailand, and Pakistan.

“My parents are immigrants from Pakistan. My father came to this country with $50 in his pocket,” Malik said. “It gives me solace to be able to help these refugees get on their feet.”

He charges a family $800 a month to rent a three-bedroom apartment that would ordinarily cost $1,100. Although he has been struggling to pay his loans on the apartment building, he is trying to keep the building long enough to house Syrian refugees too.

In June, Al Roustom and his family moved into a 3-bedroom railroad apartment in Jersey City.

They felt overjoyed but also nervous. When Al Roustom made the split-second decision to leave Syria, his family never expected to leave the Middle East.

“I was very afraid at first, especially because of the language barrier and the inability to connect with the outside world,” Al Roustom’s wife, Suha, said in Arabic. “But things are working out well now.”

They started new lives in a neighborhood filled with fried chicken restaurants and Islamic centers. It’s a diverse community with a large Arab population.

Five months on, the children are in school and Al Roustom works overnight baking pita bread at a bakery in Ridgefield, N.J.

Since all their photographs were left behind in Syria, a lone tennis racket hangs on their apartment wall in place of pictures. They have been too busy to take and print new ones.

Al Roustom tries to make use of every moment. Although he leaves for work at 8 p.m. and doesn’t come home until 9 a.m., he refuses to be an absent father.

He curtails his sleep in order to check his children’s homework and play Super Mario video games with them.

Al Roustom also squeezed in time to attend a recent Senate Judiciary Committee hearing on security and the U.S. refugee program. He met with lawmakers and advocated for more resources for Syrian refugees. He said it felt surreal, to go from a refugee camp with no water or electricity to the floor of Congress.

Al Roustom was invited to go to Washington to speak with lawmakers again on Nov. 13.

So accustomed to glowering, laughing or joking still feels foreign to Al Roustom. But he is slowly getting used to it. He smiles whenever he watches his 3-year-old daughter and 7-year-old son play in a park.

“They didn’t play in a park for five years,” he said. “It’s very difficult to laugh or smile. But I always do when I see my children playing.”

Nadia Ghattas contributed to this report.