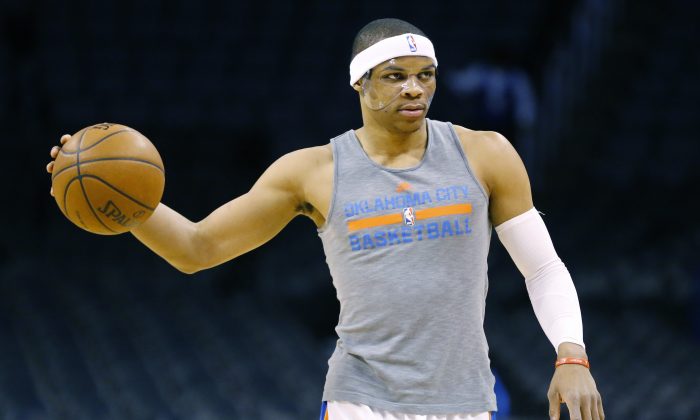 This Stat Could Change the 2015 NBA MVP Conversation

The Oklahoma City Thunder have a pretty bad record when Russell Westbrook scores 34 or more points in a game, especially compared with other leading MVP candidates and Westbrook’s star teammate.

The 2015 MVP conversation has gradually narrowed down to Westbrook, James Harden, Anthony Davis, and Stephen Curry. For some reason, many are starting to include LeBron James, so we’ll add him in this article.

The Thunder are just 5-7 when Westbrook scores 34 or more points, including a loss on Thursday night to the Chicago Bulls in which Westbrook scored 43 points.

Westbrook is far short of the other MVP contenders in this statistic.

When Scoring 34 or More | Create infographics

The Thunder even have a perfect record this season when Westbrook’s star teammate Kevin Durant scores 34 or more points in a game. The team has gone 5-0 in such games. Durant has only played 27 games this season due to injuries.

The Los Angeles Clippers are 0-1 when Chris Paul, who has entered the MVP conversation in some minds, scores 34 points or more in a game this season, although he’s known more for his passing and defense than scoring.

The Bulls had a 8-3 record when Derrick Rose scored 34 or more in 2010-11, when he won the MVP, although he is listed as a point guard unlike James and Durant.

This one statistic certainly does not tell everything. Three of the losses for Westbrook and the Thunder came against the Trail  Blazers, for instance.

Another interesting stat that not many people are using to help determine the MVP shows more favorably on the explosive guard–the team’s record without said player. The Thunder are a miserable 5-10 without Westbrook, though many of those games had OKC missing Durant as well. The Cavaliers are 2-9 without James. The Pelicans are 6-5 without Davis. The Rockets are 0-1 without Harden. The Warriors are 0-1 without Curry.

That leads to yet another little-used stat so far in the MVP conversation. Harden has only missed one game so far this season, and that was due to suspension. Curry has only missed one game, due to injury. James and Davis have missed 11. Westbrook has missed 15. It’s tough to blame guys for getting injured, but that distinction is shaky in James’ case. And it’s right to laud players for toughing it out and only missing a game or two the whole season, even if it’s some luck involved.