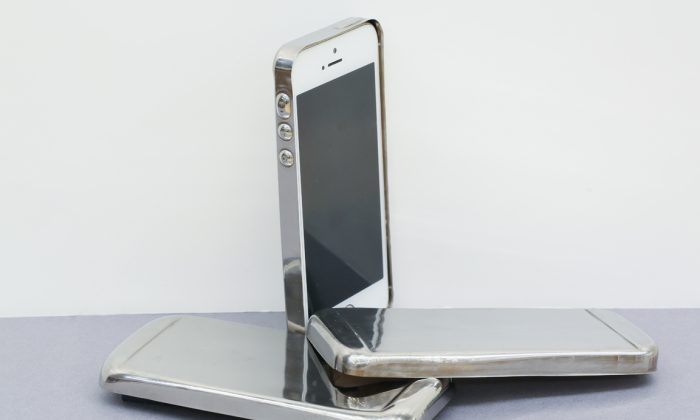 What do you look for in a cell phone case? Hardness and weight. (Courtesy of Yale University)
Tech

This Smartphone Case Is 3X Harder Than Steel

A new smartphone case is lightweight, thin, harder than steel, and as easy to shape as plastic. What’s the catch? You can’t purchase one—not yet, anyway.

Jan Schroers, who teaches mechanical engineering and materials science at Yale University, developed the technology for the cases in his lab and wants to bring the product into mass production.

For years, academic and commercial institutions have sought an effective technique for shaping these bulk metallic glasses (BMGs)—a new generation of strong-yet-pliable materials.

Electronics casings, in particular, have been identified as a desirable application. Yet past attempts at finding a shaping process were unsuccessful.

Schroers spent much of the past decade pursuing a fundamentally different approach to precisely shaping complex geometries. Instead of melting the BMG material and forcing it into a mold at high temperatures, he utilized a unique, supercooled liquid state for the material, in which the BMG softens sufficiently to allow for shaping.

From there, Schroers focused on producing BMGs in sheets. That form, he reasoned, is the most conducive to practical, manufacturing applications.

“Developing a fabrication method for BMG sheets has been extremely difficult because it requires a fundamentally different process,” Schroers said. “We succeeded recently, with a surprisingly versatile process that is fast, precise, and economical.”

Schroers’s method produces sheets that can be used in standard manufacturing operations and blow-molded into an array of shapes.

Schroers’s lab also created a BMG blow-molding process, which can be carried out as easily as the process for blow-molding plastics.

Seeing the commercial potential for his technique, Schroers launched his own company, Supercool Metals. The company has exclusive licensing rights to the technology, which is owned by Yale.

“We’re taking a great scientific idea and making it viable in the larger world,” said Tobias Noesekabel, Supercool Metals’ intern and an MBA candidate at the Yale School of Management.

Until now, Schroers has focused on smaller-scale, specialty production items, including watch components and sensors. Smartphone cases were a natural, but challenging, next step.

“It’s obvious. The important properties in a cellphone case are hardness and weight,” Schroers said.

He and his team produce the cases by blow-molding BMG sheets into brass molds to precise specifications. Of particular note is the ability to design metal buttons into the sides of the case, which constitutes a huge advance in making smartphones more waterproof.

With the right manufacturing partner, Schroers said, he could scale up production by late 2015. He added that design work and production could remain local.

“We see ourselves doing this close to Yale,” Schroers added.