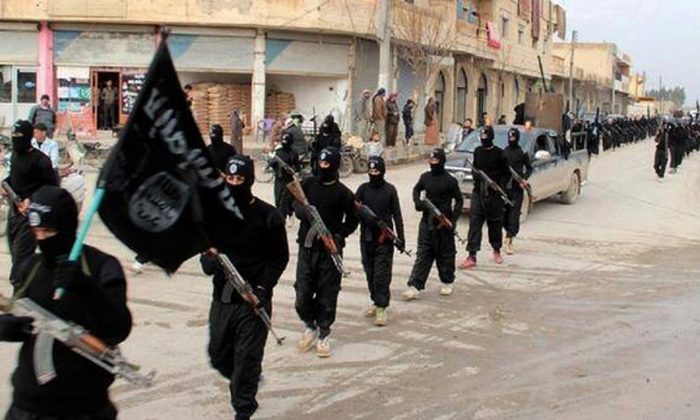 This undated file image posted on a militant website on Jan. 14, 2014, which has been verified and is consistent with other AP reporting, shows fighters from the al-Qaida linked Islamic State of Iraq and the Levant (ISIL) marching in Raqqa, Syria. U.S. Arab allies Egypt, Saudi Arabia, the United Arab Emirates and Kuwait are discussing creation of a military pact to take on Islamic militants, with the possibility of a joint force to intervene around the Middle East, The Associated Press has learned in Nov. 2014. Even if no joint force is agreed on, the alliance would coordinate military action, aiming at quick, pinpoint operations against militants rather than longer missions, officials said. (AP Photo/Militant Website, File)
US

This Rapper Who Toured with DMX Just Named an International Terrorist

A former German rapper who at one time toured with DMX was named as a terrorist by the U.S. State Department this week.

The rapper, known as “Deso Dogg,” is Denis Cuspert, who joined the Islamic State, or ISIS, a few years ago. Terror experts say he appears to be a recruiter for the group.

According to the State Department:

Cuspert has pledged an oath of loyalty to ISIL leader Abu Bakr al-Baghdadi and appears to serve as an ISIL recruiter with special emphasis on recruiting German speakers to ISIL. Cuspert is emblematic of the type of foreign recruit ISIL seeks for its ranks – individuals who have engaged in criminal activity in their home countries who then travel to Iraq and Syria to commit far worse crimes against the people of those countries … Cuspert has been a willing pitchman for ISIL atrocities. Cuspert is also wanted by the German government on suspicion of involvement in terrorist activities in his home country.

Cuspert, 39, was born in Germany to Ghanian and German parents. He reportedly started to associate with extremists about five years ago. He left to go fight for ISIS in Syria in 2013.

According to a report from Fox News, Cuspert appeared in a video and is “seen with other fighters who are shown shooting one person and beheading another. Cuspert is not shown killing anyone, but holds the severed head and announces that the dead were enemies of ISIS.”

“That’s why they’ve received the death sentence,” Cuspert is heard saying in the video.