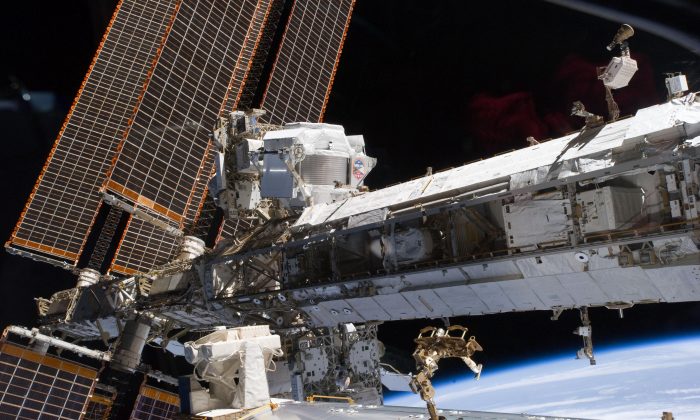 The Alpha Magnetic Spectrometer on the starboard of the International Space Station (NASA).
Science

This One-Pound Gamma-Ray Sensor Can Find Gold on Asteroids

Precious earth minerals are rare on Earth but abundant in asteroids—the problem is, before they can be mined, they first have to be found.

Researchers at Fisk and Vanderbilt Universities recently unveiled a new type of gamma-ray spectroscope that can better prospect asteroids for valuable minerals than existing prototypes.

Spectroscopes are not a new technology, having been used on numerous space missions to collect data on planetary geology.

And space mining companies like Planetary Resources already made plans to test prospecting technology in space long before this new sensor was announced. But the new design is much cheaper and smaller than its predecessors, making it a more attainable device for private space missions that could accelerate the space-age gold rush.

Gamma rays form when cosmic rays clash with asteroids, producing scattered wavelengths that can be decoded to map the different materials buried within an asteroid—from rock-forming elements like iron and silicon to radioactive ones like uranium, to what space mining companies are really after: valuable earth minerals like gold and platinum.

The new design’s superior efficiency rests on its sensor being made out of a recently discovered material called europium-doped strontium iodide (SrI2). This provides a more economical alternative to detectors that use high purity germanium (HPGe), which has always been the gold standard for gamma-ray spectroscopy, according to Arnold Burger, a professor of physics at Fisk University.

“[HPGe] requires cryogenic cooling so it is very bulky. It also needs vacuum-tube technology so it consumes too much energy to run on batteries,” said Burger in a statement.

While SrI2 spectroscopes aren’t quite as accurate as those made of HPGe, they’re portable enough for smaller spacecrafts and even robotic landers, which is a major benefit.

Germanium detectors were used on the Japanese Space Agency’s lunar orbiter mission Kaguya and on NASA’s Mars Odyssey orbiter, but they can be expensive for private companies, not to mention too bulky for asteroid missions.

Planetary Resources’ prospecting nanosatellite, the Arkyd 100, weighs only 30 pounds, whereas the Mars Odyssey clocked in at nearly 1,600 pounds.

The SrI2 gets even smaller. The current prototype is a CubeSat (the cube-shaped, smallest type of nanosatellite) that weighs only 1 pound, but Burger says it can do the job of a 200-pound system.

At the same time, the CubeSat boasts the advantage of being a bona fide high-resolution spectroscope, yielding more accurate results than low-resolution counterparts that have been used on other missions, where mapping the composition of a space object can take months of data collection.

“With our proposed system it should be possible to measure sub-surface elemental abundances accurately, and to do it much more cheaply because our sensors weigh less and require less power to operate,” Keivan Stassun, a professor of astronomy at Vanderbilt University, said in a statement.

“That is good news for commercial ventures where cost, power, and launch weight are all at a premium,” Stassun said.

It’s difficult to ascertain the exact value of the rare minerals that can be harvested from asteroids, since a shift in supply could mean a dramatic fall in their price. But a conservative estimate puts the value that can be found in a single asteroid in the hundreds of billions of dollars, if not more.

The new spectroscope is just the latest development in the new and rapidly expanding space mining industry. In July, Planetary Resources launched its first test spacecraft from the International Space Station, and earlier this month Congress finally passed the Commercial Space Launch Competitiveness Act, which gives mining companies the full rights to keep whatever minerals they extract from asteroids.

These are pioneering times, but sometime fairly soon, the space gold rush will be in full swing.