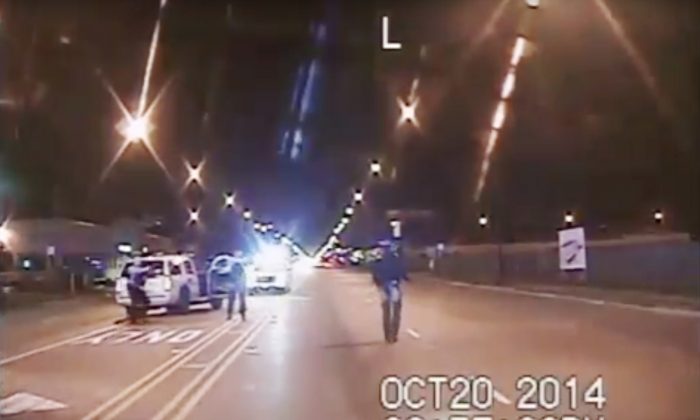 In this Oct. 20, 2014 frame from dash-cam video provided by the Chicago Police Department, Laquan McDonald, right, walks down the street moments before being shot by officer Jason Van Dyke in Chicago. Van Dyke, who shot McDonald 16 times, was charged with first-degree murder Tuesday, Nov. 24, 2015. (Chicago Police Department via AP)
US

The graphic video showing the shooting of a black 17-year-old in Chicago sparked protests in the city, but more footage has surfaced.

WLS-TV acquired the new footage, shot from a Chicago Police Department cruiser, shows officer Jason Van Dyke driving to investigate a report of a suspect with a knife. Van Dyke has been charged with first-degree murder in the death of Laquan McDonald, who was shot more than 16 times.

Here’s a copy of the new footage (WARNING: disturbing content):

In the new video, the officer is seen kicking something out of McDonald’s hand after he was shot.

Superintendent Garry McCarthy told WLS-TV: “There were apparently technical difficulties, but in no way shape or form is there any evidence that anything was tampered with.”

The Chicago Tribune, meanwhile, reported that there are at least four other videos than the one officially released by the police department earlier in the week. According to the newspaper, here’s what was released:

•A video of Van Dyke’s squad car following McDonald through the lawn of a Burger King restaurant and pulling up alongside him as he walked down the center of Pulaski.

•Another video of a squad car arriving at the shooting scene moments after McDonald crumpled to the ground. The video shows the teen appear to move slightly in the street with streams of blood trailing from his body.

•Two other videos from a pair of other police vehicles that drove up near the incident but appeared to be quickly dispatched to help set up a perimeter and control traffic.

The Chicago Teachers Union on Thursday endorsed a “Black Friday” march. “We have watched in anger and disappointment as the city has covered up police violence,” CTU Vice President Jesse Sharkey said in a statement obtained by Reuters.

“This incident is a tragedy and it’s absolutely unacceptable, but Jason Van Dyke’s actions are not representative of Superintendent McCarthy’s values or of the hard-working men and women of the Chicago Police Department,” a spokesperson for Emanuel told the New York Times.