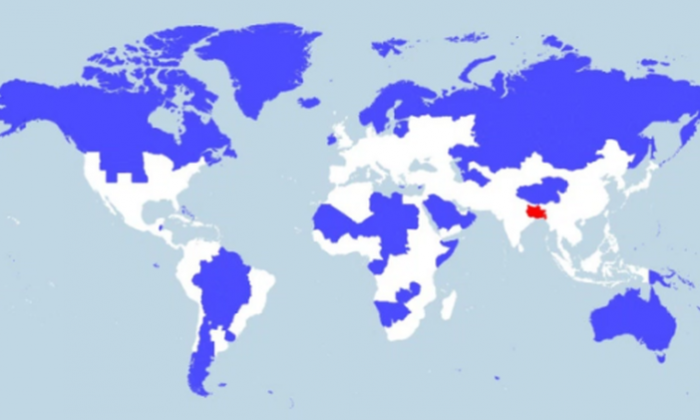 This Map’s Red and Blue Regions Each Represent the Same Thing. Can You Guess What It Is?

A new map shows the world’s population in a stunning three-colored division.

The remaining 90 percent of the population is represented by the white part.

A closer look details the surprising conclusion, with Australia, Canada, Sweden, and a number of other countries (and parts of others) fitting inside the blue part.

Bangladesh, which has a population of just over 172 million people, and parts of India that amount to 221 million people (so 393 million combined) comprise the red part.

The map was made by data cruncher Max Galka using QGIS, a free and open-source mapping tool. He used the Miller Cylindrical Projection and the Credit Suisse Global Wealth Databook for the population figures. He shared his thoughts on the map with io9 via email, including the most interesting part–the red part.

“What I find most interesting is that such a dense population center can be in a area that has so little global prominence. Bangladesh is the 7th most populous country in the world, but how many people could even locate it on a map?” he said.

“Another thing I have found interesting is that many people seem to view the map from the perspective of overpopulation / overcrowding, or as a political message about inequality between the developed and the developing world. If anything, I see South Asia’s dense population as a positive thing.

“It is very efficient economically, socially, and environmentally for people to live in dense population centers. And a movement out of rural areas into cities is trend that is happening everywhere in the world, even in India and Bangladesh. So in that sense, they are ahead of the curve”