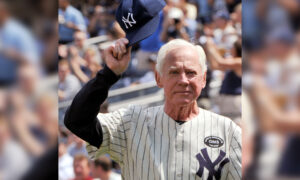 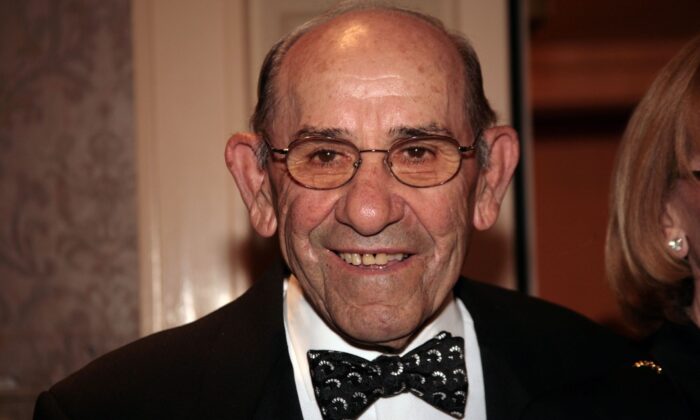 This Makes Cents: Yogi Berra Gets a Stamp Named in His Honor

LITTLE FALLS, N.J.—Yogi Berra once said, “A nickel ain’t worth a dime anymore.”

Well, neither are postage stamps. They cost 55 cents for a forever stamp, and that’s the price for the Yogi Berra stamp issued Thursday by the U.S. Postal Service.

The stamp honoring the New York Yankees Hall of Famer and the man of endless philosophical musings was dedicated during a ceremony at the Yogi Berra Museum & Learning Center in Little Falls, New Jersey. The stamp is now being sold at post offices nationwide.

“We hope this stamp will serve as a reminder of Yogi’s larger than life personality—both on and off the field,” said Ron Bloom, chairman of the U.S. Postal Service board of governors.

Bloom was joined at the ceremony by sons Larry, Tim and Dale Berra and sportscaster Bob Costas.

A family statement lauded the Postal Service for honoring a “baseball icon who demonstrated the right way to earn the respect of family, friends, competitors and people everywhere.”

Berra won three American League MVP awards, was an 18-time MLB All-Star and played in the World Series in 14 of his 18 seasons in Yankees pinstripes.

After retiring in 1963, Berra took two teams to the World Series as a manager. He was elected to the Hall of Fame in 1972 and posthumously received the Presidential Medal of Freedom. He died in 2015 at 90.