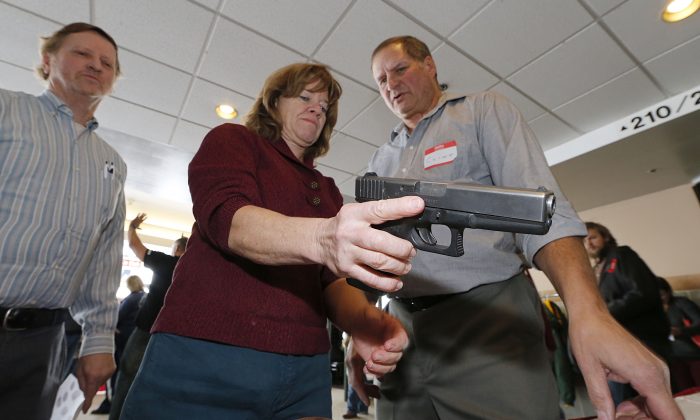 A Utah teacher is shown how to handle a handgun by instructor Clint Simon (R), at a concealed-weapons training class to 200 Utah teachers in West Valley City, Utah on Dec. 27, 2012. (Photo by George Frey/Getty Images)
US News

Teachers at a Kentucky school district could be carrying concealed guns soon after a proposal was preliminarily approved this week by a county school board.

The unanimous vote by the Pike County School Board came after parents, teachers, and administrators testified during a town hall meeting about school safety concerns.

The vote also came on the heels of school shootings in recent weeks, including one in Western Kentucky that left two dead at Marshall County High School.

The vote authorizes the board’s attorney to work with the Pike County Sheriff’s Office to finalize a formal policy, reported the Lexington Herald-Leader.

The sheriff’s office would oversee the program.

Pike County Schools Superintendent Reed Adkins said he hopes to have armed teachers in schools by the start of the next school year, if not sooner.

“You hope you’re making the right decision for kids, but I know right now something’s got to be done,” Adkins said. “We may be criticized, but at the end of the day I’ll take criticism to protect my students.”

Nearly everyone who spoke at the meeting supported arming staffers, who would be trained by the sheriff’s office.

President Donald Trump is among the federal officials who have expressed support for arming teachers, arguing that a lack of armed people on school grounds leaves educators and students defenseless against a shooter.

“The faster we can respond, the more of our babies that are saved,” said Christopher Burrows, superintendent in Georgetown Exempted Village Schools, a 1,060-student district in Georgetown, Ohio, where some school employees carry guns. “Those folks that are armed are part of our safety team.”