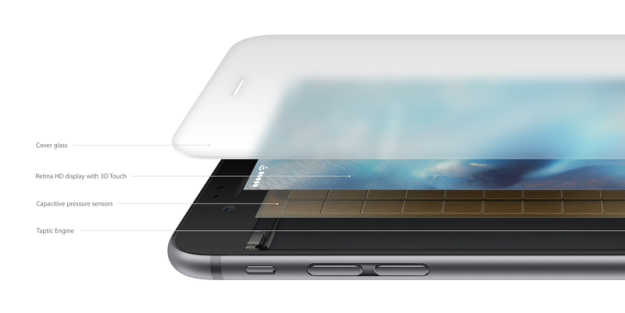 DON’T MISS: 10 hacks that will change the way you use Gmail

The iPhone 6s is exactly 14g heavier than the iPhone 6, while the iPhone 6s Plus weighs 20g more than last year’s iPhone 6 Plus. For many people, the extra weight is negligible, but other existing iPhone 6 owners who upgrade to the new models might be more sensible.

However, the components that add weight to both iPhone 6s models are the 3D Touch elements added to the display and the new Taptic engine. The display assembly contains capacitive sensors (see top image) that can register the pressure of taps and touches. The iPhone 6s has a display assembly that weighs 29 grams, or more than 2.5 times the weight of the iPhone 6’s similar component (which weighs 12g).

Who Needs the iPhone 6S? This Is the Smartphone We’ve Been Dreaming Of

The Taptic engine (image below), which likely forced Apple to reduce overall battery capacity, likely adds extra weight as well, although The Verge doesn’t mention it.