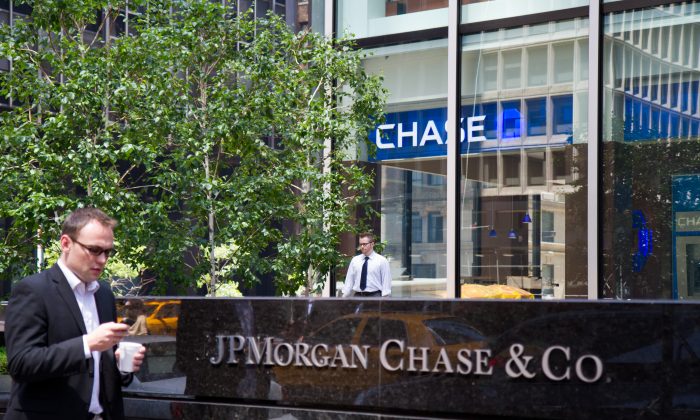 The JPMorgan Chase Co. headquarters on Park Avenue on May 29, 2012. The bank reported $26.5 billion in profit for the 12 months ended June 30, which is the most profitable year for a company in the history of banking, according to Bloomberg. (Benjamin Chasteen/The Epoch Times)
Business & Economy

This Is What’s Hitting Bank Earnings This Quarter

Goldman Sachs reported $6.9 billion in revenues in the third quarter with an 18 percent year-on-year decline, with profits plunging 38 percent to $1.4 billion.

The bank’s revenue from fixed-income, currency, and commodity trading fell 33 percent for the same period. It was the biggest year-over-year drop in the last eight quarters.

“Our clients evaluated the potential implications of a slowing Chinese economy, the decision by the People’s Bank of China to devalue its currency, and the resulting volatility in global markets,” said Harvey Schwartz, CFO of Goldman Sachs at an earnings call on Oct. 15.

JPMorgan, the largest U.S. bank by assets, reported $23.5 billion in revenues in the third quarter, a 6.4 percent decline year over year.

Revenues from trading fixed-income, currencies, and commodities slumped 22.6 percent to $2.9 billion. When adjusted for the sale of a physical commodities business and other changes, the decline would have been 11 percent, the company said.

According to Marianne Lake, CFO of JPMorgan, it was tougher to make money because of the low levels of activity. She offered little hope on markets revenue for the next quarter and said the markets are pretty quiet across all asset classes in October.

“It’s too early to give a specific guidance, but based on those facts alone, analyst estimates appear high,” she warned.

Citigroup, the third largest U.S. bank by assets, also reported a decline in third quarter revenues. The company recorded $18.5 billion in revenues, with an 8 percent year-over-year decline. Thanks to lower expenses and net credit losses, profits for the same period rose 36 percent to $4.2 billion.

For the quarter ahead, the bank said it has no clarity on many important issues.

“Predictions on the timing of an interest rate increase seem to change every day. We don’t yet know the long-term impact of recent volatility on consumer and business sentiment. And in many large markets, there are high degrees of political risk, which have economic ramifications” said Michael Corbat, CEO of Citigroup at an earnings call on Oct. 15.

Another common theme for the investment banks in the third quarter was the reduced viability for IPOs, which slashed the revenues from underwriting activities.

Given the expectations that energy prices will remain lower for a longer term, both JPMorgan and Citigroup have increased their credit loss reserves for the oil and gas sector.

In terms of exposure, Goldman Sachs said it is not a big lender to the energy space. The bank announced it has less than $200 million exposure to energy trading houses.