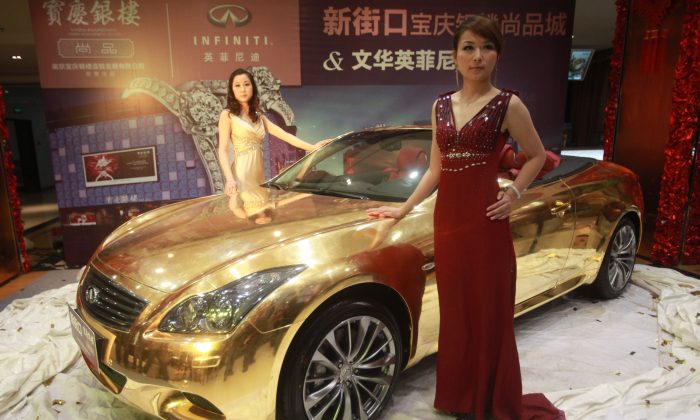 In China, if the regime wants people to know something, it doesn’t have to hold press conferences, like in the United States.

It just tells the People’s Daily or another mouthpiece what to print and it will gladly oblige.

So it’s interesting to see the very same People’s Daily printing an interview with “an authoritative insider,” answering the “five most pressing questions on the Chinese economy.”

Whether or not this insider exists in real life, you can safely assume these are the five things the Chinese regime wants you to believe about the Chinese economy, whether true or not.

What is not true is that China’s crisis of management will be without cost.

The interesting thing, however, is that the current assessment is not too far away from an objective look at the Chinese economy. What is questionable is the capability of the regime to achieve the goals set forth by the “insider.”

In essence, this is correct, but some analysts like Diana Choyleva, chief economist of Lombard Street Research, said the economy actually contracted in the first quarter of 2015. It is also true that China as an authoritarian regime has more power to manage (“carefully steward”) a potential financial crisis (“serious problem”) than freer economies.

What is not true, however, is that China’s crisis of management will be without cost. “What they cannot do, they fundamentally cannot make bad projects good projects. If you built an apartment block in the middle of the desert and no one wanted to live there, you are going to lose money on your project,” said Fraser Howie, author of “Red Capitalism.”

The frantic actions of the central bank recently show that the regime is indeed concerned about things getting out of hand.

This is tied in with the high household savings rate the “insider” lauds. People were forced to save at below market interest rates because they don’t get any retirement or health care benefits. These savings went into bank loans to many unproductive projects.

“By constraining the growth of household income and subsidizing production, China forced up its savings rates to astonishingly high levels. Second, by limiting the ways in which Chinese households could save, mostly in the form of bank deposits, Beijing was able to control the direction in which these savings flowed. Finally, Beijing controlled the lending and deposit rates and set them far below any ‘natural’ level,” wrote Michael Pettis, a Beijing-based economic theorist and financial strategist.

Working through the bad loans will take time, and as researcher Richard Vague estimates, it could cost China as many as 20 years of subdued growth, similar to Japan (25 years and counting).

It seems the “insider” is not too worried about slow growth, and rather focuses on reforms and abandoning the old model of heavy stimulus.

Regarding the long-term future, he adds a third element:

And this is historically what China has been rather bad at; otherwise it would not have to worry about a debt bubble going bad.

The “insider” thinks innovation is the solution to transform financially driven investment growth into better goods and services for the consumer. Currently, China is better known for copying and stealing, rather than innovating.

As of this moment, the risks inside the system might be under control. But as Richard Vague pointed out in his research, the growth in private debt has been so high and so fast that historically all economies with a similar profile have suffered from either a currency or a banking crisis soon after.

The frantic actions of the central bank recently, however, show that the regime is indeed concerned about things getting out of hand.

The “insider” is confident that excess capacity in industries such as real estate can be managed as they go through a “painful destocking.” However, real estate makes up roughly 20 percent of the Chinese economy and the regime is already taking action to cushion the decline.

When asked about macroeconomic policy in general, the “insider” reiterated the focus on reform:

Given the size of China’s (debt) problems, we can only wish the “insider” good luck with that.