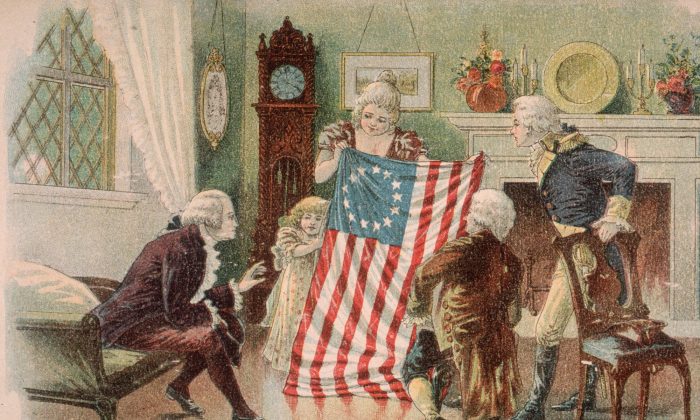 ‘This Is Not the Land of Grievance’: Rush Limbaugh Unveils Betsy Ross T-shirt as ‘Pushback’ Against Nike

Radio host Rush Limbaugh has released a t-shirt featuring the Betsy Ross flag as pushback against what he says is the “trashing” of American values.

Nike recently nixed a sneaker featuring the Betsy Ross flag, days before it was due to go on sale for Fourth of July celebrations, at the behest of former NFL player Colin Kaepernick, who said it was racist because it harked back to an era of slavery.

Limbaugh’s t-shirt is emblazoned with the phrase “stand up for Betsy Ross.”

“Here comes Nike making a new set of tennis shoes, the Betsy Ross flag,” Limbaugh wrote on his website. “Colin says, “I don’t like that. That’s offensive to me.” And so Nike cancels it. And there wasn’t any pushback.”

“So we decided to push back,” he added.

She's a heroine, an early American woman. A woman who was fundamentally involved in the creation of our national symbol. There's no reason this woman should come under assault.

Profits from the sales of the t-shirt will go to the Tunnel to Towers Foundation, a charity set up to help the families of 911 victims.

“There are millions of Americans who do not respect, and do not think it’s cool, to constantly trash America and blame America when the people doing it have become incredibly wealthy,” Limbaugh told Fox News.

“They have never-ending opportunities. They have had more opportunity than anybody in the world ever. They still persist in wanting to trash and criticize and blame America.”

According to the Wall Street Journal, former NFL player Kaepernick complained that the Betsy Ross flag, which features 13 stars in a circle, was created in a period of American history when slavery was widespread.

The cancellation of the shoe—like Kaepernick’s refusal to stand for the national anthem—sparked outrage from many Americans on social media.

The Governor of Arizona announced he was withdrawing state incentives for a Nike factory, saying the company had “bowed to the current onslaught of political correctness and historical revisionism.”

Some media reports echoed the claim that the flag had been co-opted in recent years as a symbol of right-wing white-supremacists or extremists. However, there appears to be scant evidence for this.

Many commentators recently pointed out that the Betsy Ross flag featured in the backdrop to President Barack Obama’s inauguration.

The flag also does not feature on the database of extremist symbols managed by the Antidefamation League Center on Extremism (ADL), which does include the array of swastikas, fists, and communist hammer and sickle symbols typically associated with extremist organizations.

Mark Pitcavage, a senior research fellow at the ADL told Bustle, “The ‘Betsy Ross’ flag is not common among white supremacists.”

It has been used by some Ku Klux Klan groups, he said, but added that white supremacists have often have used all kinds of historical American symbols.

Michael Jensen,  a senior researcher at the University of Maryland’s National Consortium for the Study of Terrorism and Responses to Terrorism, told Bustle that it is common for white nationalist groups to use ordinary historical symbols.

The only group to have currently explicitly adopted the flag—and an altered version at that—is the Three Percenters, an American group that built itself around the protection of constitutional rights, notably gun rights, as a bulwark against a tyrannical collectivist government.

Their flag features a III in the center of the 13 stars. The “Three Percent” refers to the idea that only 3 percent of American colonists took up arms against the British.

The official Three Percent website says that they are not a militia group, and are not anti-government. “We are very pro-government, so long as the government abides by the Constitution, doesn’t overstep its bounds, and remains ‘for the people and by the people.'”