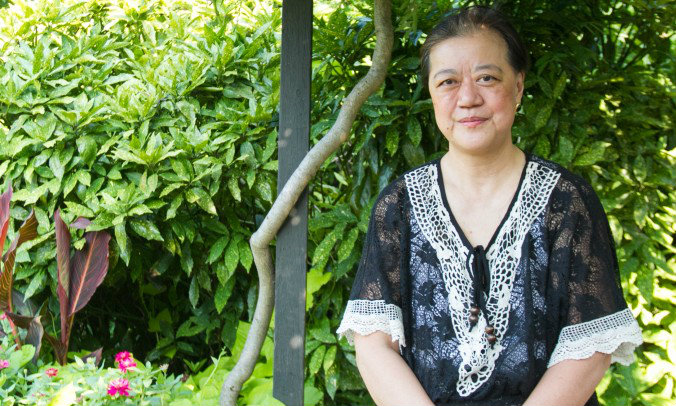 This Is New York: The Untold Story of Dr. Yeou-Cheng Ma, Violin Prodigy and Medical Doctor

NEW YORK—Dr. Yeou-Cheng Ma is so dedicated to the Children’s Orchestra Society that when she went into labor, the natural thing for her to do was to carry on with the music lesson. She coped with her sharp pregnancy pangs by taking frequent bathroom breaks to huff and puff.

The orchestra needed a cellist, and a guitar player had agreed to switch to a new instrument at the last minute. Ma, who had sat in on most of her brother Yo-Yo Ma’s cello lessons growing up, took the initiative to give this child his first cello lesson. The child went on to attend the San Francisco Conservatory of Music and play cello professionally.

Over the years the media has portrayed Ma as a sullen character, a lesser-known prodigy hidden by her brother’s shadow. The reality is quite the contrary.

Ma has deeply inspired many young lives through the Children’s Orchestra Society (COS) with her positive energy. Although she did not become the famous violinist she once thought she would be, she is not living a less meaningful life.

Sure, there is a quality of sadness in her almond-shaped, deep set eyes but it is merely the inherent sadness of an introverted and introspective nature.

She was said to be a forgotten violin prodigy, who once studied with the famous Arthur Grumiaux, but her lessons were thwarted after Yo-Yo Ma came along. But the lessons stopped because, after her family moved from France to the United States, they couldn’t find another teacher who taught in the same Franco-Belgian school.

“For a while I thought I was unhappy because I didn’t get lessons,” she said. “But when I visited France at 40, I realized I was just missing France this whole time.”

There is no bitterness, jealousy, or disappointment in her voice. Ma’s point of view is almost always positive, and often humorous.

She tells funny stories of her and Yo-Yo Ma teaming up to trick their parents.

As children, they formed a secret SOS call: la-ti-la-do, la-ti-la-do. One would play those notes when their father was too tough; the other would rush through the door, interrupt, and save the day.

The Work Behind Genius

Their father, Dr. Hiao-Tsiun Ma, was a musician who received a doctorate in musicology from the Sorbonne, and studied violin and composition at the Paris Conservatoire. Legend has it that he once taught a dog how to hum Chopin.

He went on to have two genius children—Yo-Yo Ma and his sister, a violin prodigy and a graduate of Harvard medical school.

Ma and her brother were home schooled. When preparing for a lesson as short as 10 minutes, their father would work two hours to choose the most relevant parts of the subject to teach them.

She and her brother were always challenged to play harder music.

“My father used to say that nothing is really hard,” she said. “If anything is hard just cut it into four pieces, and if that’s hard cut it into sixteen pieces. Eventually you can conquer it.”

Despite her strict upbringing and high standards for herself and others, Ma values childhood playtime. “Children should have time to be creative,” she said. “In this world, you need to be creative in order to be adaptable.”

She belongs to the Alliance for Childhood, a research and advocacy group that supports children’s healthy development. “Every day there are machines that can do more things,” she said. “In order to be human … we need to have that spark of creativity.”

“It’s very important to let kids know you believe in them,” she said. “Both my brother and I feel that way. At some point in our lives people believed in us. And we worked hard because of that.”

She and Yo-Yo Ma were born in Paris under modest circumstances. They lived in a small fourth floor apartment, where running water was only available in the hallway. “That was not so bad,” Ma said. “That was better than a painter we knew who had to go out to the courtyard to get running water.”

They didn’t always have money for lessons. Ma and her brother received many lessons for free growing up. “We were moved by how our teachers believed in us,” she said. “That is a very powerful thing for children to feel.”

That is why today, COS charges very little for its programs. For those who cannot pay, they charge nothing. Ma said that teaching music is a community service.

COS requires auditions, but it accepts children regardless of their talent or income. The only requirement is a desire to learn. They challenge children and never tell them that they are not capable. “We say maybe not today, but maybe tomorrow,” she said.

When Ma was 6, she once played with her father’s orchestra. She could only play one note, the last note, and it made her very proud.

As a developmental pediatrician, Ma never tells her patients they can’t do something. She once had a 15-year-old patient with cerebral palsy who wanted to play soccer. He could only move one side of his body, so his chances to play were slim.

She told him if he wanted to play soccer, he would first have to learn how to tie his shoes. She taught him how to tie with one hand. ” At least I moved him one step closer to his goal,” she said.

While working as a full time pediatrician, Ma has worked tirelessly to restart and expand the school that her father started.

Her father founded the nonprofit orchestra in 1962 with the intention of teaching American children discipline. Ma and her brother played in the orchestra growing up.

He had wanted his children to take over, but Yo-Yo Ma was busy performing, and Ma was hard at work as a medical intern at Bellevue Hospital so the orchestra was disbanded for seven years. But restarting the orchestra was always something in the back of Ma’s mind.

In 1984, Ma realized that her husband, Filipino guitarist and conductor Michael Dadap, had always wanted to have an orchestra of his own. They took the plunge and relaunched the orchestra. The timing was not great, but it never would be.

They were newlyweds who had just bought a house and a piano. They had roughly $2,500 in savings, and spent it all on the orchestra. “I smiled to my husband and said, I hope this works, otherwise, we won’t be able to pay next month’s mortgage,” Ma said.

It worked. Ma and her husband transformed an 18-member ensemble into an organization with four orchestras and more than 200 students.

To accommodate students of varying skill levels, the teachers write simplified musical passages so that everyone can participate. Its child-centered music education is rare in today’s schools. School arts programs have become increasingly standards-based, according to a 2010 Americans for the Arts report.

In the case of a student who was bad at taking auditions, judges almost didn’t let her in. Ma insisted that her student get an extra week to practice. She ended up performing with Yo-Yo Ma at a COS concert, and went on to become a neuroscientist.

Members of COS said that one of the most inspiring aspects of the program is meeting famous musicians.

“One of the special traits of COS that’s different from other local programs is that it provides students the opportunity to perform alongside world-renowned artists,” said Kevin Shue, a former COS student who has returned as a conductor. Shue won the Children’s Orchestra Society Discovery Competition in 2002, which took place at Lincoln Center, topped off by a positive New York Times review.

In 2007, COS made its Carnegie Hall debut with guest artists Jaime Laredo and Sharon Robinson. The New York Times has reviewed several of its performances. Cho-Liang Lin, Cecile Licad, and David Shifrin have also performed with COS.

“We think it’s very important for children to have a chance to touch history,” Ma said. She recalls how she and her brother met legendary musicians such as Pablo Casals, Bernard Greenhouse, and Isaac Stern, and the effect they had on the two.

The same year that violin prodigy Sarah Chang debuted with the New York Philharmonic, she also played as a guest star in COS.

Ma often tells the second violins and violas that they are vital for an orchestra, even though they play the harmony rather than the main melody. She reminds her students that Chang’s father purposely made her play second violin parts during her first year at Julliard so that she could learn to hear the music.

“My children learn that it’s hard to get good at anything, and this transfers over to their school work,” said Lesley Stackler, who has a child attending COS. “They learn patience, team work, and dedication.”

Over the years, Yo-Yo Ma has only visited COS twice. Emanuel Ax made an appearance at COS before he did. “It’s hard to get him,” Ma said. “I only ask him to do something every five years.”

During the first week of COS camp this summer, Ma awoke at 4 o’clock each morning to prepare the music. She went to work at the hospital afterward.

Recently, they took in some unexpected saxophone players and had to transcribe notes for them. Her husband stayed up until 4 a.m. to transcribe the music, then Ma got up at 4 a.m. to make copies of the music.

Amid their busy schedules, Ma and her husband worry about funding cuts and potential future replacements. “We are looking for future leaders, constantly training young ones to see if they will stay on and take over,” she said. A stern look grows on her face when she thinks of it.

During a COS concert in June, Ma appeared solemn as she sat in a dark corner of the theater and watched alone. Her active eyes scanned the orchestra, and whatever somber thought had been passing through her head stopped and she smiled. The children have noticeably improved since the beginning of the year.