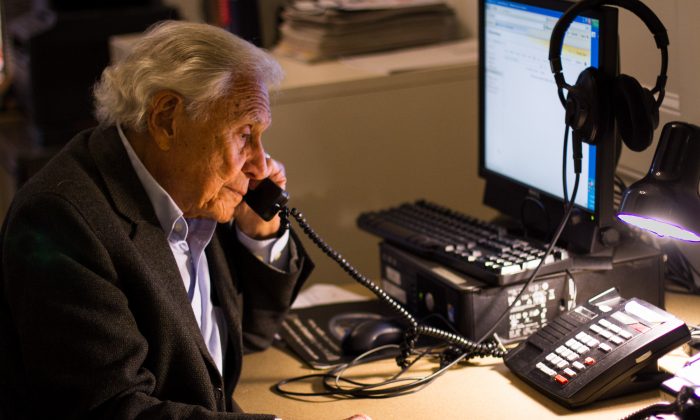 This is New York: Stan Brooks, Seven Decades of News and Six of Marriage

NEW YORK—Stan Brooks sits at his desk in the corner of the newsroom—at 86 he is clearly the oldest on the team. On his wizened face is written his story, one he has collected over decades of covering tough news beats for 1010 WINS and Newsday.

The toughest story he covered was during the Attica Prison Riot in 1971. He reported on site after roughly 2,200 inmates seized control of the facility and took 33 staff members hostage in a protest over prison living conditions. It was a violent few days that left 29 convicts and 10 hostages dead, and 89 wounded.

Stan is still reporting for 1010 WINS; he covers two stories a day, writing three versions of each so the news cycles have engaging variations. He was part of the vanguard of 1010 WINS when it became America’s first all-news radio station in 1965.

For 50 years, he has been reporting with valiant determination. He covered the JFK assassination trial, Vietnam War protests amid tear gas at the capital, as well as reporting on Desert Storm from Saudi Arabia.

He said he learned the difference between working fearlessly and living without fear from his late wife, Lynn Brooks. Lynn passed away on May 4 and with memories so fresh, Stan was compelled to share her memory in his City Hall office, June 6.

He said the smartest thing he ever did was propose to Lynn.

Over the years, Stan’s dedication to his job has been unrelenting. He used to work nights at Newsday, with a schedule that left little time for dates.

But he didn’t mind. Reporting was his passion and it was all he needed—or so he thought—until one fateful evening during a square dance at the Henry Street Settlement.

It was the end of November in 1952, shortly after Thanksgiving, when he was introduced to Lynn at the dance. She told her mother afterward that she hoped Stan would call.

But in the beginning it was difficult for them to juggle time. Lynn had a day job at a senior center in the Bronx and Stan continued to work late at the paper.

“I went to work at four in the afternoon, so I’d pick her up at 12:30 p.m. from the senior citizen’s center, where all the old ladies would say, ‘Oh the boyfriend comes, the boyfriend comes,’” Stan recalled. “It was a Jewish Italian neighborhood. They all said the same thing in the same accents.”

“It went on like this for several months,” he said.

Although the two did not get as much time to spend together as many couples do, Stan knew early on that he would never meet another girl quite like Lynn.

“She was just a warm, friendly, happy person,” he said. “She was the most open person I knew.”

They were married in May 1953, a little over a year after meeting.

One of the most important lessons Stan said he learned from Lynn was how to enjoy life one day at a time.

At a seemingly untimely part of their lives, Lynn once suggested that they drop everything and travel to Europe.

“She said, ‘You know what, we have no possessions, no kids, wouldn’t it be wonderful to use that [wedding] money and go to Europe because once we buy a house we will be old the next time we have time again,’” Stan recalled.

He found the idea unsettling at first.

They had only been married a year and Stan had just landed a new position at Newsday. “She was suggesting that I quit my job, but we were living on my salary,” he said.

A visit to Stan’s brother one summer changed his perspective.

“My brother was a doctor and his wife was a doctor, they had three kids. They spoke of wanting to get away for a weekend. But they just could not find the time to do it,” he recalled.

“On our way back, [Lynn] said, ‘Your brother and sister have more money than we will ever have, and they can’t even get away for a weekend. If there ever was a time to go to Europe, it’s now.’”

So by September 1954, Stan quit his job and they hitchhiked across Europe for as long as the money lasted.

For three months, they traveled and met hospitable locals who showed them the authentic corners of Europe. And when they returned, Stan got his job back.

The Beginnings of Big Apple Greeter

Throughout their marriage, Lynn convinced Stan to visit other places, such as China, Japan, and Africa.

“She was unafraid,” he said. “She opened up the world to me.”

According to Stan, throughout their years of travels, there were two experiences in the 1980s that left a deep impression on Lynn.

One occurred during their safari trip in Kenya and Tanzania. Fellow tourists balked at the thought of visiting New York, saying it was too dangerous.

“When we said we came from New York, all these people—who were just looking at lions and tigers—would say, ‘New York, oh I’d be afraid to go there because of all the crime,’” Stan said.

Another incident occurred in Denmark, when they were visiting the family of an exchange student they had once hosted.

They met the boy’s parents on a remote island off the coast of Denmark.

“We said to his mother she should come to New York to visit. Her son translated,” Stan recalled. “His mother’s eyes popped open and [she] said, ‘New York, bang-bang-bang. New York no, New York dangerous.’”

“Here’s a woman who doesn’t speak any English, lives on a remote island off the coast of Denmark, and when you say New York the only thing she thinks of is bang-bang-bang they kill people in New York,” Stan said.

“People in Europe and Africa were afraid to come to New York. …That became Lynn’s crusade,” he said.

Lynn founded the Big Apple Greeter program in 1992, at age 59. The program provides a free public service that connects visitors with volunteer New Yorkers, who take the visitors around their neighborhoods for a safe and local experience.

During fiscal year 2009–2010, the greeters welcomed around 7,000 people, 84 percent of whom were international visitors, according to the organization’s website. It was estimated that the direct economic impact to New York was $11 million.

Some were tourists who may not have otherwise traveled to New York.

The program has been expanding; the Global Greeter Network was founded in 2005, and now consists of 36 programs on six continents.

Stan had not considered retiring until Lynn passed away. He is being treated for lung cancer, and cannot work with as much energy as before.

“Right now living is not as much fun. I miss her terribly,” he said. “We had sixty wonderful years, she not only cared for me but she cared for the world.”