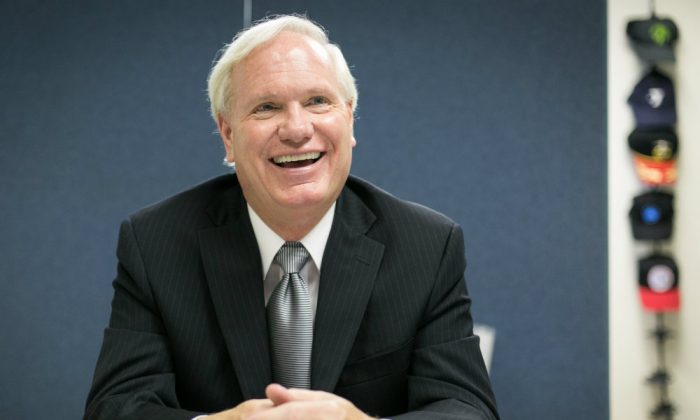 This Is New York: Sen. Tony Avella, an Unconventional Politician

NEW YORK—Sitting in an office filled with documents, artwork by small children, and an exceptionally neat desk, New York state Sen. Tony Avella resembled a congenial school teacher rather than a politician.

“I didn’t think I would go this far,” Avella admitted.

After losing some minor races in his early political days, his mother once tried to convince him to choose another career. His family believed he was “too honest” to ever succeed in government.

Although he ended up serving two terms on City Council, and won his Senate re-election by a majority, it is true that Avella, 62, has always been a rather unusual politician.

During his eight-year tenure at City Hall, Avella only took one vacation; throughout his four years in the Senate, he has only gone away for one weekend. “I feel guilty,” he said. “Many people are depending on me.”

He often calls his staff after work hours, to talk more about work.

He works long hours but he’s not a coffee drinker. He prefers soda.

There is a mini-fridge by his desk filled with Coke. He keeps Coca-Cola memorabilia at home—a collection of various Coke glasses and things of that sort. He clarified that this was not a protest against Bloomberg’s large soda ban. Although he is against it.

And as for his love life, despite the power, he was never a ladies’ man. “I was always at political meetings. You don’t really meet a lot of women that way,” he said.

In the pre-Internet era, Avella met his wife, Judith, a health care consultant, through a personal classified ad in the newspaper. “I was never a bar kind of guy,” he said. They married in 1989.

Avella was a budding civil engineer student from Astoria, Queens, who found solace in fishing. His family used to fish on a small beach on the North Shore of Long Island. They had one acre on the waterfront, which his parents sold for only $35,000 before the housing bloom.

Avella did not come from a family of politicians. His father was a disabled veteran who passed away when Avella was 17.

Avella attended Hunter College during the political unrest of the ’60s, which inspired him to shift gears midway from engineering to political science. “The government was unresponsive to the people,” he said. “I hate politics. But if you want to change things, you have to do it from the inside.”

In 2002, Avella was elected as Queens council member for the 19th District. One of the major issues he took on was landmark preservation. Avella was responsible for the Demolition by Neglect bill, which was signed into law in 2005. If a landmark had withered away, a property owner legally had the right to develop it. The legislation prevented property owners from destroying a landmark willfully through neglect.

“That’s one of my most notable memories—being able to do my part in saving New York City’s history,” he said.

He is also concerned with controlling over-development and preserving New York City’s unique neighborhood characteristics. Avella helped create new zoning districts such as R2A, which prevents the construction of “McMansions,” or large houses that look out-of-place in the neighborhood.

Avella was first elected to the state Senate in 2010. In Albany, he has been involved in two on-time budgets.

He was re-elected by a majority in 2012. He supports a property tax cap and tax breaks for renters and homeowners in New York City.

As Avella currently faces Senate re-election he said he has no fears, although he has little money.

“I hate asking people for money,” he said. “I’ve driven every political consultant I’ve ever had crazy.”

Over the years, Avella has stuck to his basic philosophy: Government had lost the trust of the people, and something has to be done about that.

But after 20 years in government, on the inside, Avella, too, has lost much of his initial hope for change. But not all. “It’s still worth fighting,” he said. “As long as people elected me here, I will keep fighting.”

CORRECTION: A previous version of this article incorrectly quoted Avella. What he actually said is: “I hate politics. But if you want to change things, you have to do it from the inside.” Epoch Times regrets the error.