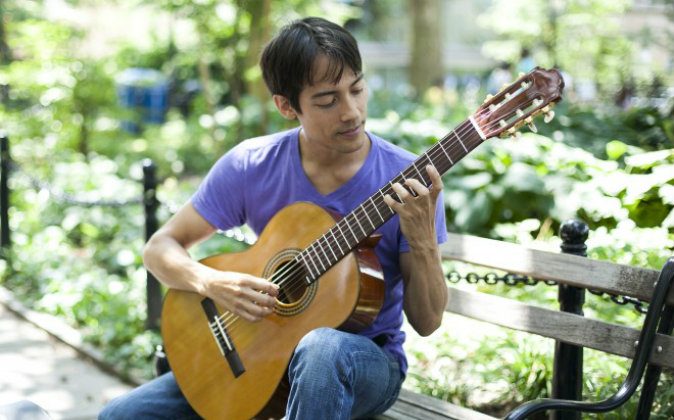 This Is New York: Scott Pilgrim, on Making the Effort for Introspection

NEW YORK—It would be easy for Scott Pilgrim to watch Netflix, and avoid thinking about his problems. The social awkwardness with roots in childhood insecurities, a tangled mess of memories and sensations, is painful to examine. But Pilgrim reflects on such complexities anyway: he takes control of his life.

He sits in a park on a Tuesday afternoon playing mellow tunes on his guitar and thinks.

In a world that grows busier by the day, with little time left over for pondering, Pilgrim has somehow managed to go against the tide.

In a recent study titled, “Just think: The challenges of the disengaged mind,” researchers found that most people find it difficult to sit in a room for 6 to 15 minutes with nothing but their thoughts.

“Many preferred to administer electric shocks to themselves instead of being left alone with their thoughts,” the report stated. “Most people seem to prefer to be doing something rather than nothing, even if that something is negative.”

Pilgrim, 34, prefers to think. He emphasizes self-awareness, a conscious knowledge of one’s character, feelings, and motives.

He believes it is important to look inside and recognize one’s problems, and only then can problems cease to control one’s life. “When you observe that you have a problem, accept it and deal with it; you are getting rid of the subconscious influence that it has on you,” he said.

One of the heroes of his life is his mother, a single mother who worked 12 hours a day at a factory that produced hinges for doors and airplanes.

“You have to take that into consideration when you evaluate yourself,” he said.

As a cry for attention, Pilgrim acted out and was sent to the principal’s office often. Sometimes, he bullied others. Unlike the stereotype, he was not a bully with many friends.

Pilgrim grew up in Montgomery, Ala. Montgomery is the state capital, yet it had always felt like a small place to him. Most of the people around him went to ball games and hung out at bars, and if one did not conform to the general consensus of acceptable leisure activities, one had no place in Montgomery.

“It was the small things, like my mannerisms, that made me an outcast,” he said. “I didn’t like to talk about sports—that was one of them.”

As a child, he preferred to spend time in the kitchen with the women, rather than watching sports with the men.

Understanding what made him who he is, and that it was not necessarily anyone’s fault that he was unhappy, Pilgrim moved to New York City five years ago.

He is currently studying computer science at Brooklyn College. “We’re led to believe that money is the measurement of success, that it’s where happiness comes from,” he said.

He didn’t choose the major entirely because it is profitable. “It’s the modern platform for communication,” he said. “It can help businesses.”

When he first moved to New York, he slept on the floor of an apartment. Now he has his own apartment in the East Village.

“We’re capable of adjusting to different lifestyles,” he said. “In that sense, is money all that important? Happiness should be the measurement.”

Pilgrim is getting married in a month. He didn’t think he would meet a girl in New York, but it happened very naturally when he met a lovely massage therapist at the restaurant where he works.

Their wedding will be inside the Creative Little Garden in the East Village.

He said he definitely wants to have children, even though the idea of becoming a father is daunting. “I’ve never had an image of a father in my life,” he said. “I have always identified with women more.”

But he has confidence that he will give his children the nurturing he did not receive.

“You find out what’s important by knowing what’s lacking in your life,” he said.