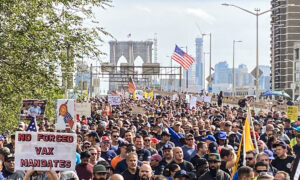 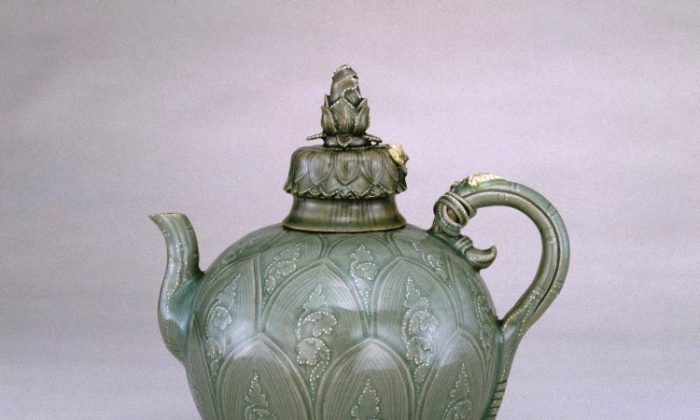 The Brooklyn Museum is in possession of a world-famous glazed, green ewer with cover from Korea's Goryeo Dynasty (918–1392). Its body, lid, and knob are in the form of lotuses, and the handle is a lotus stalk tied at the top with reeds. Stoneware with underglaze slip decoration and glaze. (Brooklyn Museum)
New York

This is New York: Robert Turley

NEW YORK—Robert Turley, a towering, statuesque, white male, is the founder of the Korean Arts Society. Native Koreans often comment that Turley must have been Korean in a past life, and he always responds assertively: “Nan y-saeng-e han-kuk-saram-iyeh-yo.” [I am Korean in this life.]

Turley, 51, is an erudite in the Korean arts community who has written Korean art history chapters in the McGraw-Hill fine art text books. He owns thousands of books on Korean art, and has found an overwhelming problem: their introductions often say, “Korean art is not very well known.”

“Books from 100 years ago say that, and if you read books printed this year you still see that in the intro of many of these books,” Turley said. “I want to change that.”

Contrary to popular belief, Korean Art is not merely an abstract of Chinese art. And Turley has a mission to make that well-known.

Many great people in history—such as Shakespeare and Hemingway didn’t even finish high school… My father always told me you don’t need money to have an education, you just had to want it.[/xtypo_quote]

“Here’s all this beautiful art people just don’t know about. Imagine growing up without ever hearing John Coltrane or Chopin. People are missing out.”

Turley first came across Korean art in the summer of 1995; he was a traveling musician at the time.

He had a band that played a variety of music and performed in France, Switzerland, and Japan, where he stopped to live for two years. Eventually, the band visited Korea.

As locals drove him around Seoul, Turley was captivated by the country, the people, the food, but nothing hit home like entering the National Museum of Korea.

“It was very soulful,” he said.

The first art pieces he saw were from the Goryeo Dynasty (10th-14th Century). He was captured by the clean elegance, and the refined, soft details on the works from that period.

His friends had difficulty beckoning him to move on to the next exhibit. Eventually, they moved on to view art work displayed from the Joseon Dynasty (late 14th-20th century). The artwork from that period, the pungcheong, provided a wild and rugged aesthetic.

“At that point, I told my Korean friends they better just go home. I was reading every label that I could,” Turley said.

Korea is a small country with a long history of foreign invasions and internal power struggles. Although many artistic techniques may be derived from China, the essence of the country’s historical experiences give their art a distinct ambiance. “I just got a very deep feeling from it,” he said.

“I couldn’t believe the culture that created pungcheong is the same one that created Goryeo Dynasty art,” Turley said, “It’s like one culture inventing classical music and blues.”

After that experience, Turley went out and bought every Korean art book he came across, and every auction catalog ever printed on Korean art.

In 2008, he founded the Korean Arts Society in hopes of raising awareness of its worth.

The group has grown to over 3,000 members since then. “It doesn’t say a lot about me, but it says there is a growing desire to learn more about Korean art and Korean culture,” Turley said. “Our events are always full, there is always a waiting list.”

The society holds events and storage room viewings of Korean art at museums.

The Society has hosted events at museums such as the Smithsonian, Minneapolis Institute of Arts, Weisman Art Museum, Los Angeles County Museum of Art, and the Pacific Asian Art Museum.

Turley found that many Korean art works in major museums are mis-credited as Chinese or Japanese due to the lack of recognition of Korean art, even amongst Asian art scholars.

“Even Japanese and Chinese art scholars who attend the event are surprised to find they learn a lot afterwards,” Turley said. “It just comes to show how unknown Korean art remains.”

Turley was especially moved by the Smithsonian’s collection of rare Korean armor. The museum holds a rare collection of masterpiece swords and helmets. “Korea suffered a lot of invasions over the centuries…They are very rare because not much have survived in Korea.”

Turley said it is a shame that besides the Korean Arts Society, no other groups have taken the initiative to view these rare Korean artworks.

“There are museums in the west that have things you can’t even see in Korea and unfortunately, many of those things are in storage rooms,” Turley said. Although he is sensitive to the fact that many items were taken from Korea, museums preserved rare treasures that would have been destroyed otherwise during wars.

“I felt sad that these things are just stuck in a drawer. The public deserves to see it; Koreans deserve to see it,” he said. Turley plans on writing a book on Korean armor.

The Korean Arts Society publishes the only English language periodical on Korean art in the world. Their fourth issue will be on the subject of promoting Korean art and culture in America.

Turley grew up in the destitute ruins of Detroit. His father was a passionate, albeit penniless, Baptist preacher, and at one point his family lived as squatters.

“We were poor financially, but culturally, we had a very rich life,” Turley said, as he recalled the vivid paintings and music from his church.

Turley studied music at the Berkeley School of Music briefly, but never graduated. “I just took some classes and decided that I really wanted to get out and play,” he said.

He ended up supporting himself with music while traveling around the world, and self taught himself to speak fluent Japanese and Korean. Turley said he learns faster through self-education.

“Many great people in history—such as Shakespeare and Hemingway—didn’t even finish high school… My father always told me you don’t need money to have an education, you just had to want it.”

It was a little awkward when McGraw-Hill asked Turley for his qualifications as they were soliciting him to write for their publication.

“I told them I have twice as much education as Mark Twain,” Turley said. “[Twain] only had a grade school education.”

Turley feels that it is a breakthrough that McGraw-Hill, a major publisher, decided to incorporate Korean art into their text books for the first time—after reading the Korean Art Society Journals. He said he hopes that very soon Korean art books will no longer begin with “Korean art is not very well known.”