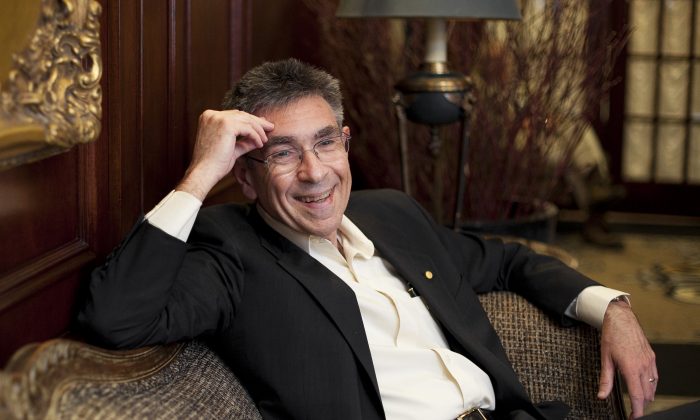 Robert Lefkowitz shares his journey to a Nobel Prize at a hotel on the Upper West Side, Sept. 24, 2013.
New York

This Is New York: Robert Lefkowitz, on Winning a Nobel Prize

NEW YORK—Returning to New York City for a ceremony celebrating his 2012 Nobel Prize in chemistry, Robert Lefkowitz checked into a hotel on the Upper West Side. One of the first things he did after arriving was to make a run to Whole Foods at Columbus Circle to squeeze some peanut butter out from the bulk food section.

It was for his breakfast the next day. His breakfast has not changed for the past 10 years, and there was no reason a trip to New York should alter his routine. His first meal of the day always consists of whole wheat bread lathered with Whole Foods bulk peanut butter and a tinge of Sarabeth peach apricot fruit spread, and of course lots of coffee.

In fact, he only changes his breakfast once every decade. The previous decade was low-fat granola, and the one before that, a 50–50 mix of oatmeal and oat bran. Whatever Lefkowitz sets his mind on he does it with absolute dedication, and that ranges from anything like his breakfast to his scientific experiments.

He developed angina 20 years ago and underwent major heart surgery. Lefkowitz, 70, has a strict vegan diet and a rigid exercise routine in his basement gym, which sometimes includes doing yoga on his Wii gaming console. “I like to mix it up,” he said.

Since winning the Nobel Prize, he’s had more flexibility and opportunities to travel. But he rejects most of those chances because of his heart.

He shared the Nobel Prize with his colleague Brian Kobilka for the discovery of G-protein-coupled receptors, which is used in half of all medications today. For many years, it was widely believed in the scientific community that such a receptor did not exist.

Lefkowitz and a few researchers worked for 15 years in solitude. Although their day-to-day operations failed, he never doubted they would succeed.

He said it was more than his intelligence that got him the Nobel Prize; it was a fearless stubbornness he calls “the chutzpah of youth.”

Chutzpah is a Yiddish word for someone with the audacity to do something that appears shocking to others.

In 1973, he moved to Duke University to set up his receptor research laboratory. He was only 30 years old. Some of his research fellows now are older than 30.

“If I was doing it right now, I would be scared stiff because in retrospect I know how difficult it is,” he said. “But at the time I just never doubted that we would succeed. It wasn’t arrogance either, it just never occurred to me that there was a possibility we wouldn’t.”

Lefkowitz is aware of how crazy that sounds.

“It’s like someone in a fighter jet going into battle and it never occurred to him that he could be shot down,” he said. “I don’t understand it anymore. It was the chutzpah of youth.”

But Lefkowitz always believed there was a higher purpose for his intelligence.

Top of the Class

He was the first in his class at medical school. He graduated with top grades at the Bronx High School of Science, a school that molded the minds of eight Nobel Prize laureates—that exceeds the number of laureates that come out of some countries.

He excelled in school with a natural ease, which he said he knew, from the bottom of his soul, that he had this intelligence because he was meant to do something big. As he accidentally fell into a career in research, he knew that the big thing he had to do was prove the existence of G-protein-coupled receptors.

It’s funny how Lefkowitz ended up there because at first he hated research and dreamed of becoming a doctor.

As a young boy, his idol was Dr. Feibusch, their family physician who made house calls in the Bronx.

Lefkowitz graduated from medical school. To avoid getting drafted during the Vietnam War, he joined a competitive program with the U.S. Health Service. There he was assigned to do research at the National Institutes of Health (NIH), but he was not good at it.

It was 18 months of nonstop failure. Yet just as his experiments showed signs of hope, he left NIH to resume his residency training in Boston, at Massachusetts General Hospital.

Although he later discovered that his true passion was working in laboratories, Lefkowitz never regretted leaving NIH for his residency.

“I’m one of these people who believe things happen for a reason,” he said. “It wouldn’t have turned out as well if I didn’t go do my residency.”

There were six months during his residency when he was required to take clinical electives. He took electives, but they were not clinical.

After being away from the lab for some time, he realized he missed it immensely. Against regulations, he went to work in a laboratory at a senior center.

“I was able to do whatever I wanted. I made the considered decision to begin working with receptors, and it was the most important decision I ever made scientifically,” he said. “Had I been at NIH I would have continued under the direction of a more senior scientist.”

Jewish Childhood in the Bronx

At age 10, he subscribed to a New York Times book club and ordered collections of books such as Winston Churchill’s six-volume history of World War II and Carl Sandburg’s four-volume biography of Lincoln—behind his parents back.

His parents were Jewish immigrants. His mother was a perfectionist, while his father was a “warm” accountant. “It was a nice blend,” he said.

Lefkowitz said the last conversation he had with his father was during the Thanksgiving of 1968, when he lamented to his father about how he hated doing research at NIH.

“He told me, ‘Don’t worry about it. It’s a two-year hitch,’” Lefkowitz recalled. His father died at age 63, when Lefkowitz was still at NIH.

“At my med school graduation, he told me it was the happiest day of his life. I wonder what he would have thought of the Nobel Prize?” he said.

It was unfortunate that his mother never saw his Nobel Prize. Growing up, whenever he got an award his strict Jewish mother would say, “It’s not the Nobel Prize.”

“Now I wonder what she would have said. I want to say, so Mom, here it is,” Lefkowitz joked.